Imagine the worst train journey ever and you’ve got Snowpiercer. This 2013 film has generated new interest lately partly due to director Bong Joon-ho winning a handful of  Oscars for his latest feature Parasite and also because a tv series is in the works. Somehow the original release of the film passed me by and I can’t remember it getting a massive publicity drive at the time. In some respects it is a typical post- apocalyptic movie- grim, unrelenting and painted in muted tones. In fact it is one of those films you start watching and then think- am I really going to stick with this for two hours? Well do stick with it because, while not perfect, Snowpiercer is an imaginatively presented thrill ride packed with claustrophobic action and not without strands of thoughtfulness.

Tapping in on global warming issues we’re in a time not that far in the future where an attempt to stop the planet heating up resulted in a big freeze across the entire surface of the world. The only survivors jostle for space in a high speed train built by one of those mysterious businessmen who only exist in films like this. We join the story 18 years after these events began and find a train in which the class differences this mode of transport has always highlighted has been taken to the nth degree. At the back of the train the tail passengers live in cramped bunks subjugated by a vicious elite who pick off numbers in some form of population control. There have been attempts at rebellion before yet none have reached the hallowed front portion of the train. We meet members of a group who are determined to better their lot by breaking out of their confinement and heading to the front. It’s sort of like a nightmare scramble aboard for the buffet car!
This scenario and the initial unfolding of events require some suspension of disbelief. For one thing we’re told the global catastrophe was almost instant yet someone managed to construct sturdy enough rail tracks that will be resistant to the sub- zero environment outside, clamber over any terrain and circumnavigate the entire world. We’re never told why this couldn’t just be a building! Then we see the rebels realising that the guns with which they have been threatened daily are empty of bullets; have they never realised this till now? Also further down the train there are plenty of bullets so why would the guards go without them when facing the people they need to subjugate? 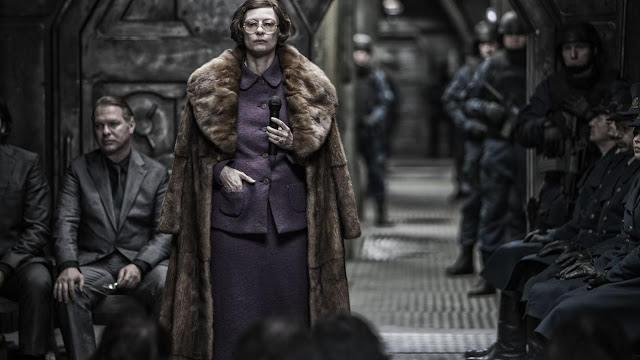 The reluctant rebel leader Curtis (a rather too well nourished looking Chris Evans) then declares they have four seconds to get through a series of doors and into the main train yet even the unlikely method they later use takes rather longer. As they progress through a series of increasingly opulent carriages it feels as if the rich / poor divide is being layered on too much. You wonder how these things can exist on a train that’s been traveling for eighteen years – clothes, furniture, fish, food etc. The funniest bit (though not intentionally so) is when we find a carriage whose inhabitants are part of a continuous night club bopping away. The point being made- rather too obviously- is that the elite have a decadent life of parties and fun while the lower classes are in abject poverty eating bizarre food. Therefore it is best not to question the logic of this film which is less robust than the rail tracks the train runs on. Instead you can enjoy the momentum of a narrative that drives on with increasing tension and dark violence. It really is full on, confined by the width of the carriages with only occasional glimpses of the frozen world they are racing through.
In the midst of all this there are some standout performances that surprise you. Tilda Swinton’s Yorkshire accented, primly dressed Minister Mason is well worth watching the film for. Complete with ugly wig and buck teeth she dispenses casual cruelty and when threatened tries to shift the blame. I’m not sure if the character is based on anyone in particular but it reminds me of many a politician! John Hurt is on hand to dispense another of his latter day quietly authoritative performances while Jamie Bell has fun as the energetic Edgar. Chris Evans delivers a counterpoint to his well- known Captain America role while Ed Harris gives the character of Wilford, the train’s architect, a surprisingly subtle dimension helped by a script that never paints him as a pantomime villain he could be. Throughout we’ve seen him hailed as some sort of deity reflecting our seeming need to glorify a higher power. However meeting him is a little like when Dorothy and co meet the real Wizard of Oz.
In terms of excitement the set pieces are superbly delivered often using the darker spaces to heighten the intensity and chaos. His use of perspective really brings us into the action and Joon-ho crafts some strangely beautiful images despite the scenario giving the film a look that keeps it fresh. There are also surreal touches particularly in the school room and a satisfying final confrontation with Wilford
The sense of jeopardy that the film creates is heightened by sudden brutal deaths and some of the best characters are despatched unexpectedly. In fact as it got closer to the end I wondered if there would be anyone left for the final scenes! The movie successfully shows another world yet one with which we can identify. Notwithstanding the awkward premise Snowpiercer is an original looking spectacle that is well worth seeing and if you’re ever on a bad train journey again then just be thankful it’s not like this one!