Reviewed by Chris Arnsby. Mike Read: “Welcome to Britain's best loved serial, Top of the Soaps. You've seen him on Radio 1, for the first ever time on television a natural life-sized effigy of Dixie Peach.” Dixie Peach: “Thanks Mike. I've been laying in the sun in anticipation for this big event. Tonight I'm going to kick off with Scritti Politti, Word Girl.”


[8] Scritti Politti: The Word Girl . The Top of the Pops studio has been refurbished. The walls around the main stage used to be fitted with neon tubes that flashed in basic geometric shapes; circles, triangles, and squares (alright settle down Pythagoras). The new neon shapes are more complicated and don't flash quite as much. The effect is to increase the overall light levels and form a more definite boundary to the set. The higher light levels make it easier to spot the hosts sneaking off when their introduction is complete. They used to escape from the main set through a secret gap in the scenery by the neon Top of the Pops logo. The redesign has given them a proper set of stairs with a Health and Safety approved handrail. 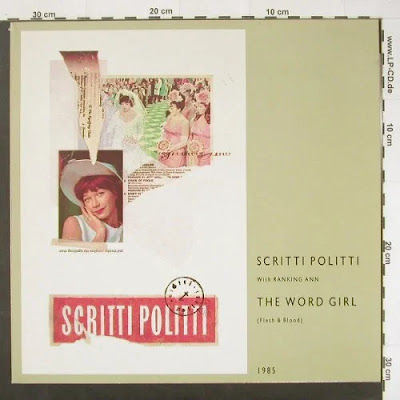 Speaking of the overall light levels. The studio is a vibrant purple tonight. A really vibrant purple. No, it's really, really vibrant. In fact, I recognise this love of purple beyond all rational limits. It's not Prince, it's Lighting Director Fred Wright freshly returned to Top of the Pops for the first time since 1982. You can find me commenting on the radioactive glow he gave Peter Powell in the write up for the 20/05/1982 Top of the Pops. What has Fred been doing for the last three years? He's roamed the corridors of the BBC working on the Doctor Who story Enlightenment , series two of the Young Ones , and later in 1985 he'll presumably bring a touch of lilac to Inspector Kate Longton in the final series of Juliet Bravo. (John- Well I felt I should at least say something about Scritti Politti. Their singer is called Green. Yep, that’s it. That’s all I have..)
[9] Madonna: Crazy For You . On video.
[11] Sister Sledge: Frankie. I like Frankie. Why do I worry that this is the most controversial thing I'll ever write? I like Frankie. It's a bouncy, happy, little pop song. Yes, it's a weapons-grade earworm but that's one of the things that helped it become such a success. The fightback starts here. Frankie is good. So there. (John- I like it too even if it sounds unlike other Sister Sledge singles.) 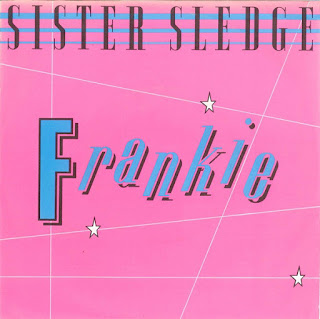 Top 40 Breakers : [30] Harold Faltermeyer, Axel F; [23] Bruce Springsteen, I’m On Fire; [16] Fine Young Cannibals, Johnny Come Home.
[4] Billy Ocean: Suddenly . “First wicket down and opening bowler,” is Mike Read’s cryptic introduction to Billy Ocean. Any ideas? Fred Wright's love of purple comes into it's own with some very striking lighting on Billy Ocean. A single spotlight cuts a line of white through the literal purple haze filling the studio. It looks great.
Top 10 : [10] Mai Tai, History; [9] Madonna, Crazy For You; [8] Scritti Politti, The Word Girl; [7] Gary Moore & Phil Lynott, Out In The Fields; [6] Duran Duran, A View To A Kill; [5] Animotion, Obsession; [4] Billy Ocean, Suddenly; [3] Paul Hardcastle, 19.
[ 2] Marillion, Kayleigh . Scotland's shortest giant, Fish, returns to loom over the Top of the Pops audience and make viewers at home think their picture is being stretched vertically. (John- Or as they say in `bonnie` Scotland, Faash. Did you know there were a whole gaggle of girls born in 1985 given the name Kayleigh. I wonder what their reaction was when told of this and shown a clip of Faash doing his stuff?)