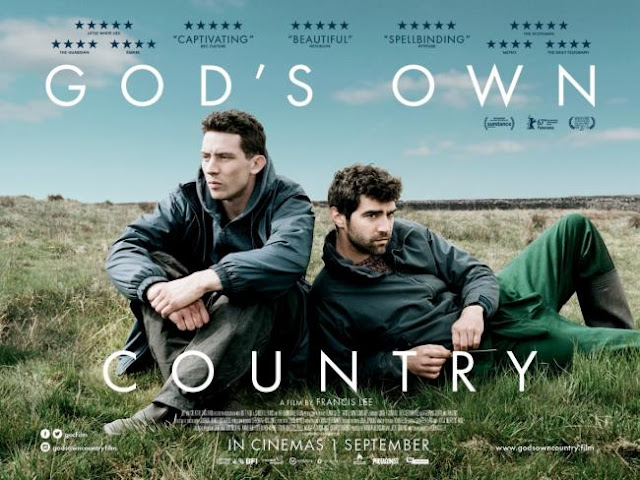 Johnny Saxby has a life that consists of working very long days on his incapacitated father’s farm and later nights binge drinking at the local pub and sometimes casual sex when he gets the chance. The key to the character is that he has shut himself down from emotional attachment of any sort and his behaviour numbs his restricted frustrating life. Though they clash he and his father are similar in their stoic determination to just get on with it and cope. Yet now the farm has hired an extra person to help with the lambing season in the form of Romanian migrant worker Gheorghe. Isolated for a week on the far side of the farm the couple’s initial mutual indifference develops into something deeper and more intense. 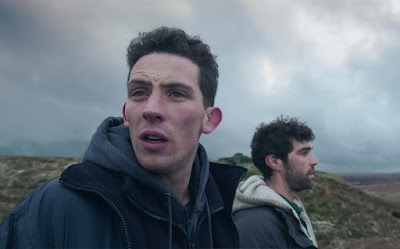 It makes you realise how we’ve become accustomed to the clichés of any love story; the looks, the choreography, the artfully managed sex scenes that look like no sexual encounter anyone has had in real life. Being in Yorkshire, this film slides all that away replacing it with no deep conversations, rough sex in very un-arty places and a real sense of two people getting to know each other. Gheorge has clearly seen more of life- his farming skills are more experienced, he cooks and he wants a relationship rather than the fumble, rough and tumble and walk away that is all Johnny knows.
This change is essayed in Josh O’Connor’s captivating performance. With so little dialogue he has to convey everything though expression and movement which he does so well it’s a shock when he has a scene at the end with more than a couple of sentences in it. You notice too how Gheorege’s more worldly, caring side changes Johnny’s approach both to his gran and father especially when the latter’s health declines further. Essentially Johnny becomes a man during the film. As Gheorge Alec Sacareanu has the less showy role but the hurt the character has suffered back home does show through his seemingly relaxed exterior. There’s also excellent work from Ian Hart as Martin Saxby, the physical broken but still determined father and the wonderful Gemma Jones as gran Deirdre who has one of those knowing expressions that makes you realise she’s probably sussed the whole situation out. 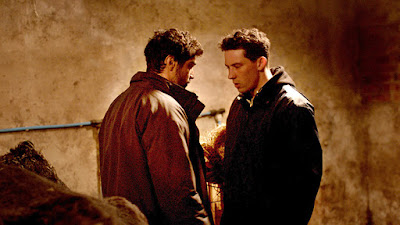 Francis Lee shoots this story heartily on windswept yet ordinary locations. He allows the camera to sometimes hold for a few seconds on something like a piece of broken twine flapping in the wind or the face of a sheep. Joshua James Richards' excellent cinematography brings you out into the cold so you can tell the temperature to the extent where you feel as if you’ve watched the entire film outdoors! For the characters themselves the camera is close to faces and is authentically intimate at all times. As with the characters there is no attempt to idealise the locations; there are broken walls, mud and ragged fields aplenty.  As he was himself brought up on a Yorkshire farm the geography is probably etched into his consciousness and it is all here.
For a film seemingly steeped in bleak iconography and minimal dialogue it's surprising that it it ends up being so optimistic. I won't give away the ending but suffice to say it wins your heart without compromise.
God’s Own Country is a film that climbs its hills slowly but holds your attention and rewards you at the end. Oh and it also features more Pot Noodles than I’ve ever seen in a film!
Posted by John Connors at 22:06