At times like these normal functioning adults are deemed to need the sort of advice you might give infant children like how to stay warm or how to remain cool. Drink loads of water, wear an extra layer, switch the heating on, make sure you open windows, that sort of thing. The sort of thing most people would automatically do. Its perfectly Ok to warn vulnerable people or kids but do we all need to know about the impending doom and how to deal with it?

And the fact is that there’s not much you can do. Politicians, journalists and people of influence hate extreme weather of any sort because even at their wiliest they can do absolutely nothing about it. No editorial or speech can halt the weather, no trending on Twitter will stop it snowing or the Sun baking the pavement. It is in fact the only subject that public opinion can never change. Faced with such a thing these people declare it is a “crisis” though most of the time only they consider it to be because they can’t do anything about it.
The funny thing is the actual weather more often than not turns out to be nowhere near as extreme as predicted. We never did have that “hottest summer since 1976” predicted last year did we? 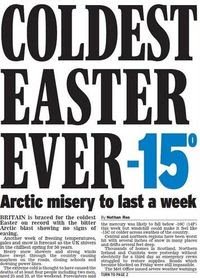 Could it be too that the weather only reaches crisis proportions when London and the South East is threatened? I’ve known instances of bad winters and scorching summers that affected other parts of the country and somehow the headlines were a little less frenetic, the response a little less urgent. If snowflakes drift over Westminster itself of course, then send for the army and convene COBRA.
The old paper newspapers are the best at this sort of thing; in fact I have a theory that the only reason these creaking publications are still going is because people love their outrageous headlines. Admittedly most of these come from the exaggerated stories the Daily Express loves to print alarming us every day about something or other. The best one they ever did one year was to start the summer with the declaration “Another Washout Summer on the Way”. Not long afterwards they predicted “Heatwave to Last All Summer”! Even when they get it right they can’t resist lathering on the doom and gloom. It’s not just floods its “Flood Chaos”, the temperatures are not low, it’s a “Killer Freeze”. Is it just a storm? Nah, it’s a “Monster Storm” of course. It would be nice if one time they just run a headline that says “Boring mild but slightly breezy day today”.