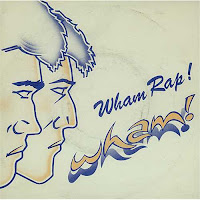 
[4] Tears For Fears: Change.  On film. Curt Smith croons while shrouded figures scuttle through the kind of steel and glass building that was starting to become more common in 1983. Where is it? Who knows. It's not the Coutts building in the Strand. It looks sort of new-town-Milton-Keynes-ey. I can definitively rule out the Hempstead Valley Shopping Centre in Kent. A home counties location would make sense for any penny conscious director looking to stretch the budget given to any band that wasn't Duran Duran.


[35] Patti Austin & James Ingram: Baby Come To Me. Speaking of people's whose names can only be whispered (like that scene in The Fellowship Of The Ring where Gandalf passes on a message to a moth) BBC4 has lopped Baby Come To Me out of existence because it's introduced by J-n-th-n K-ng at the end of his US Chart Rundown. It's an unusually obvious edit. The video for Never Gonna Give You Up ends, the audience applause fades oddly, and we cut to Peter Powell and his deathless prose. "And now to the masters of music video. This is Madness!" I wouldn't normally tell the phantom editor how to do his job, but maybe this could have been accomplished by a simple cross-fade to the studio performance of Baby Come Back To Me? You can even cut out the USA Number One caption if that's causing concern. People will just think it's Michael Hurll fiddling with the presentation again.


Top 30: Gary Davies is still getting used to this presenting lark. He's not getting the required energy into his Top 30 countdown. Things start off well but we're in trouble by number 24. The slide has changed to 23 (Haysi Fantayzee) before Gary finishes explaining that the Madness single is a new entry. The remorseless march continues. Haysi Fantayzee blip off screen before Gary has finished and then, oh-no, he unwisely pauses for breath. There's no time! Number 22 is another new entry for Depeche Mode with Get The Balance Right. Gary only reaches the word "get" before the slide flips to U2 at number 21.


[14] The Fun Boy Three: Tunnel Of Love. A disappointing night for Neville Staple and Lynval Golding. They achieve sub-Andrew Ridgeley levels of close-ups. In the end the pair have to crash a close-up of Terry Hall during some synchronised "ooohs." Unfortunately Peter Logan on Visual Effects has set the smoke machine to fug and the close-up is suddenly obscured. In fact the studio smoke goes so quickly from Highlands Mist to pea-souper that I wonder if we might be seeing two separate takes edited together? Or possibly the smoke machine has caught fire.


[1] Kajagoogoo: Too Shy. The show closes with the credits rolling over the number 1 song. Gary Davies and Peter Powell stick around for the duration. Could they like Too Shy more than Wham Rap!? (That punctuation is a problem) Outrageous. After Peter Powell says goodnight the camera pulls back to reveal a man sitting glumly on the ground. He's wearing a large foam rubber cowboy hat and evidently he's been asked to sit down to avoid blocking the two hosts. (John- And do you know because nobody told him he could stand up he remained sitting there for a further three days until the cleaner threatened to douse him with lemon smelling floor cleaner?)