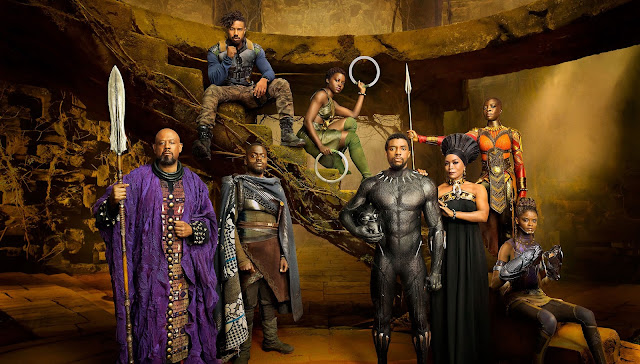 I’m pleased to say that Black Panther definitely belongs in the excellent category. Visually fresh it replaces the usual urban scenery with lush jungles, spectacular waterfalls and wide plains. When we do see the city it is delightfully dressed with sprigs of plant life and homages to traditional African culture.  Yet it is also very high tech with remote controlled cars, super – fast railways and indestructible suits. We spend the majority of the film in Wakanda, a supposedly Third World country as far as other nations are concerned but in reality hiding their futuristic city. The things they have developed come from vibranium a mineral that was contained inside a crashed meteorite centuries ago.  It is this power that is the source of much of the trouble that lands on Wakanda as T’Challa arrives home to become King.
The story is slight in itself yet contains enough nuances to progress the film over two hours with a strong momentum. We see some of the countries’ traditions- the challenge for the crown is particularly vibrantly staged- and meet T’Challa’s sister Shuri who’s a tech whizz, his mother Ramonda and his former lover Nakia. If the early scenes of family reunions are a little bit forced the characters soon open up. While the initial threat comes mainly from South African Ulysses Klaue, the really interesting antagonist is someone who calls himself Erik Stevens but who turns out to be a relative of T’Challa with a claim on the throne. 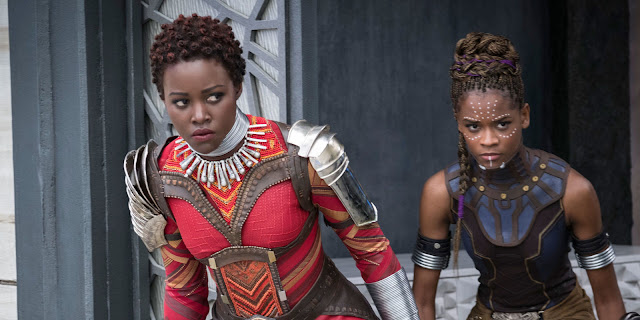 It is this character who injects the much anticipated racial angle into the narrative accusing the established Wakandans of ignoring the plight of African people for centuries when they had the power to do something about it. It’s a persuasive argument especially as Stevens has a personal beef with T’Challa’s family and their argument seems to largely consist of “this is not our way.”
There’s a risk that- rather like Captain America and to some extent Thor- T’Challa can seem to be eclipsed by others in his own film. Michael B Jordan is excellent as the bitter but swaggering Stevens- there’s real venom when he makes his accusations as well as unpredictability. Plus he has the best hairstyle ever! Danai Gurira shines as the deadpan loyal bodyguard Okoye; surprisingly she also get some well time comedic moments. Angela Basset brings practical dignity to the role of Ramonda while Letitia Wright is full of zest as the inventive Shuri. Yet it is Chadwick Boseman’s quiet determination that makes T’Challa more interesting on screen than he would seem on the page. Some critics have said they don’t feel we learn enough about why Stevens does whereas I feel it is T’Challa whose essential sense of fair play is not really explained. Is he simply trying to emulate his apparently good father or is there something else?
One aspect of the film that’s pleasing is the unhurried manner in which it unfurls. Some blockbusters seem to think that they have to throw action at you every minute while Black Panther leaves space for the characters to breathe.  The style extends to the visual side with vivid unusual trips into the afterlife and the history of the country. The result is a more thoughtful movie despite the hardware it exhibits and one which hides its main plot surprise well. 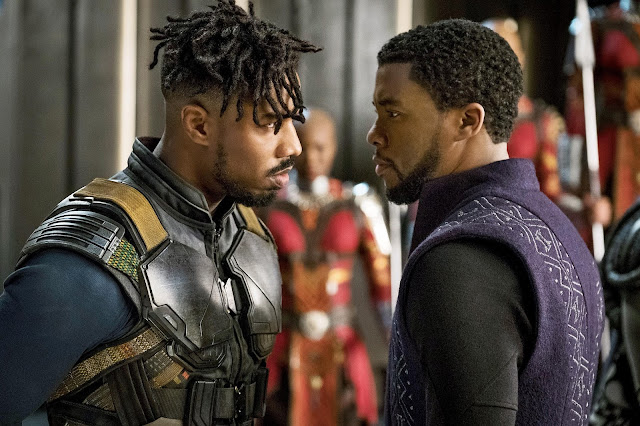 The action scenes feel fresh and different with some inventive use of African imagery incorporated into things like shields that look like cloaks or warriors charging atop rhinos. The same merging of cultures happens in the film’s music which switches from rap to drums to pop in a moment. The narrative also shifts from genre to genre with aspects of espionage, sci-fi, myth and some definite nods to the Bond franchise. The undercover mission in particular is a riot.
Black Panther is not the film you might think it is or perhaps even the one some wanted it to be but its better than perhaps anyone expected. Somehow director and co-writer Ryan Coogler has fashioned a movie that does everything right or as near as you can get. It doesn’t preach, it doesn’t try to wow your senses to oblivion it simply tells its story with stealth and intelligence.