Reviewed by Chris Arnsby. Janice Long: "Hello, good evening, and welcome to Top of the Pops. We're going to have a great time tonight. Aren't we Pat." Pat Sharp: "We certainly are Janice and, kicking us off at number 3, here's The Belle Stars and the Sign Of The Times."
[4] The Belle Stars: Sign Of The Times. Pat Sharp gives Sign Of The Times a definitive article and an extra chart position. Still, it's a great song so I don't care. Thanks to The Belle Stars appearance in last week's Top 10 Video Show this is probably the first non-number one song to be played three weeks in a row on Top of the Pops. The opening shot of the performance is striking because someone -presumably Designer Graham Lough- has rigged the projection screen at the back of the set to display a coloured Moiré pattern (you might remember seeing one in Star Trek as part of Doctor Spock's science station). The entire picture is just a big close-up of Stella Barker and a shifting coloured background. It looks great but it's a surprisingly low technology effect. 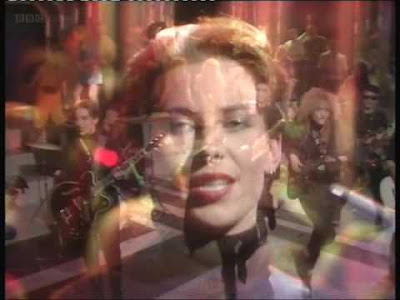 [7] Joe Cocker & Jennifer Warnes: Up Where We Belong. The promo film for the song.
[27] Thompson Twins: Love On Your Side. I spent ages wondering what "sentimental roses," were and how they differed from regular ones. I still don't know. (John – And would anyone actually give “hard headed roses”?) 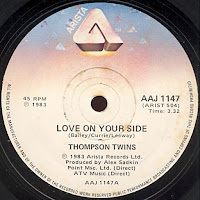 [32] Depeche Mode: Get The Balance Right. Pat Sharp boldly discovers a new pronunciation for Depeche Mode. He puts all the emphasis on the first syllable and turns them into Dey Pech Mode. It makes a change from all those times the hosts kept trying to call the band Depech-ey Mode. I'm not sure if pea-lights have just been invented but one of the set designers has gone pea-light crazy. They're everywhere. The Depeche Mode set looks like it's escaped from Disneyland's Main Street Electrical Parade. Maybe it's all part of Michael Hurll's master plan to turn the Top of the Pops studio into the funnest place on Earth.
[19] Toto: Africa. On film. This is the Toto song where the keyboard goes "dah, dah, dah, da-da, dah, dah." Not to be confused with Hold The Line their earlier song where the guitar goes,"daaah, dah, dah, dah, dah." (John- Its also the only song ever written to use the comparison “As sure as Kilimanjaro rises like Olympus above the Serengeti”)
[24] Level 42: The Chinese Way. Top of the Pops invested in new raised walkway set elements for the live 1982 pre-Christmas show, and the programme is making good use of them. Marvel now at the swooping camera shot which zooms back and swivels through 1800 to travel from Pat Sharp gazing down at us to Level 42 on stage. Another new purchase are spinning disco lights (there's probably a more technical name for them) (John- Are they Varilights?) which have been added to the lighting grid. I'm not sure when they first turned up but they seem to be a 1983 purchase. A quick trawl through old episodes shows them first appearing in the 20/01/1983 edition presented by Janice Long and Gary Davies. 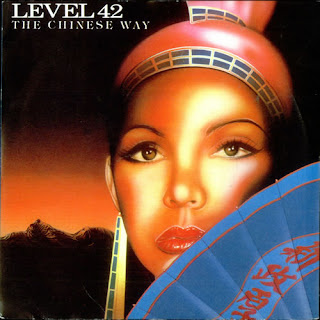 [17] Michael Jackson: Billie Jean. "It's the first chance we in Britain get to see this video on Top of the Pops," says Janice Long. Does she mean it's the first time the video has been broadcast in Britain, or that it's the first time people in Britain have been able to watch the video on Top of the Pops?
[21] Central Line: Nature Boy. Central Line are back, still rockin' the twixt Blake's 7 and Robin of Sherwood look. Also back is the fancy Central Line graphic used at the end of the band's previous appearance on 27/1/1983.
[18] China Crisis: Christian. Also back are China Crisis who were one of five bands on the 27/1/1983 edition of Top of the Pops with songs outside of the top 30; along with Level 42 and Central Line. I would have been willing to bet money that we wouldn't have seen any of those three back in the studio. This is why I'm not Michael Hurll. Had I been Michael Hurll, I would have insisted that Designer Graham Lough get two matching chairs for China Crisis. Instead it looks like someone went to the BBC canteen and grabbed the first two they could find.
[1] Men At Work: Down Under. Still on film.
[29] Jailhouse Rock: Elvis Presley. Wondering why this song is back in the charts? It looks like the film Jailhouse Rock was released on VHS and Betamax (natch) in 1983. Top of the Pops closes with the studio audience jitterbugging away, and it looks like Pat Sharp and Janice Long stay and join in. John Bishop is credited as Director this week.