Top of the Pops 1981 currently on BBC4. Watched by Chris Arnsby
BBC1, 7.25pm. Bellamy's Backyard Safari has just finished and now something is about to happen. Something wonderful.
Multi-coloured records fly out of fog towards the camera. The words Top of the Pops flicker on screen. Numbers flash and disappear. More words, like searchlights. Top. Of The. Pops. A large pink tinted record flies to the centre of the screen, again the words Top of the Pops flicker, and the record explodes. All backed by a staccato drum beat, swooping electronic noises, and a weird ethereal voice.
I'm not sure when Top of the Pops last used a proper title sequence. Best guess 13th June 1974. That was the last programme broadcast before a 7 week strike, and when it returned the new format was a DJ introduction followed by the charts backed with Whole Lotta Love. A format which persisted in one form or another until the end of a different strike, the 1980 one by Musician's Union members. Michael Hurll has been producer since then, and he's experimented with different ways to start the show. There was the preview of the night's attractions -ditched along with the doomed dual presenter format- and since then the show has just sort of lurched onto the air with a DJ awkwardly trying to welcome viewers to the programme over the introduction to the first record. I don't doubt that in 1974 it seemed exiting and immediate to cut straight from the continuity announcer to the DJ talking directly to the home audience but by 1981 it was time for a change. A good title sequence should evoke the spirit of a programme and this fifteen second strip of film does that perfectly. It's fast, exciting, a little bit spooky, and it's not about music or bands or instruments; it's about the singles.
(The new title sequence actually premièred last week -1981 relative time- for the 900th edition of Top of the Pops but that can't be shown on BBC4 because of the presenter)


Peter Powell: "Hi folks! Welcome to this week's edition of Top of the Pops! It is jam! Packed! With good music! And for starters no better way than Saxon! Never Surrender!"
Saxon: Never Surrender [26]. What better way to start the 901st edition than some hairy old rockers? "I was born on the back streets of the rotten side of town/I never had me nothing/than people putting me down" Okay Saxon, in the spirit of not putting you down, your hair is looking very luscious and glossy like the coat of Goldie the Blue Peter dog. The audience join in with some spirited headbanging.
Third World: Dancing On The Floor [10]. On video. A less ambitious prequel to Dancing On The Ceiling.
Depeche Mode: New Life [19]. Vision Mixer Angela Wilson plugs the camera output through the Quantel box, giving a nice strobe effect to some of the visuals which matches the song. Depeche Mode themselves look impossibly young. An effect heightened by their clothes. One of them (let's say it's Martin Gore) has come along in his dad's raincoat and hat, while Dave Gahan is smartly dressed (probably by his mum) as if he is performing at his cousin's wedding.
The Jacksons: Walk Right Now [30]. Time for Legs & Co who are in danger of looking increasingly out of touch in this brave new pop world. This week they are performing in a set which looks like the interior of one of those crates used to contain Velociraptors in Jurassic Park.
Dexys Midnight Runners: Show Me [33]. Has Kevin Rowland's diction improved? The first line of the song is apparently, "show me him now/yzbg grib flibbd woid" so I'm going out on a limb and saying no. High fives all round to the BBC4 subtitles who rendered this into English as "show me them now/those wild little boys". Good job it's not the lyrics that make this a great song.
Kate Bush: Sat In Your Lap [15]. Kate Bush wearing a dunces cap, roller skating on a parquet floor into a laser tunnel. Is that the greatest shot in this video or is it Kate Bush riding on the back of a man dressed as a Minotaur who is roller skating on a parquet floor? Oh how I wish I could go back in time and watch this video being recorded. Either way, there's a lot of roller skating in this video. A metaphor for the song's themes of existential frustration and the quest for knowledge. 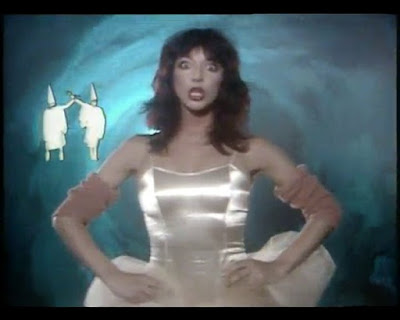 Bad Manners: Can Can [3]. Buster Bloodvessel dressed as a Can Can dancer is only the second oddest sight in this edition following the video for Sat In Your Lap. He puts in an alarmingly energetic performance with the result that the chest clutching and face pulling at the end looks like it might have urgent medical causes.
Spandau Ballet: Chant No.1 (I Don’t Need This Pressure On) [18]. The audience behave themselves, the set doesn't fall over, the band don't do anything silly, nobody is wearing anything too stupid. All this is a reflection of the increasing professionalism of Top of the Pops through 1981. A solid performance of a good song. Where's the fun in that?
Top Ten Countdown: Peter Powell bids us goodnight before the Top Ten countdown and the number one. Not the first time this has happened, but it feels more messy and unsatisfying than usual. The new opening titles and Top 30 and 20 countdowns have shown a glimpse of a more unified format and it feels odd that this isn't carried through to the end of the programme. Instead the Top Ten is basically the Top Ten of old. A mix of clips and still images for bands who haven't yet got the hang of this video-thingy. And yet, last week on the 900th edition (available around the internet- say for instance you search Vimeo for 9th July 1981) everything was done differently using the new style. Arguably the most consistent thing about Top of the Pops is that it's woefully inconsistent.
Number One: The Specials, Ghost Town. The sound of the summer of 1981. A haunting song with a spooky atmosphere amplified by the promo film shot across a night and dawn emptied London. And yet watching it now all I can think is that Terry Hall must be uncomfortably balanced on the gear stick.
Performance of the week: A good week for new songs, Spandau Ballet and Dexys Midnight Runners could both be contenders but the winner is Depeche Mode: New Life.