Steve Wright: "Hello, good evening, welcome to another edition of Top of the Pops. Among the stars tonight, Kim Wilde, Spandau Ballet, Stevie Wonder, and this lot, Duran Duran."
Duran Duran: Girls On Film [23]. It's the day after the big wedding of Charles and Diana and the schedules have quickly got back to normal. At 7.25pm Top of the Pops slots in between Bellamy's Backyard Safari and Citizen Smith giving the discerning viewer a chance to avoid BBC2 and the Six Fifty-five Special. "Songwriters B. A. Robertson and Chris de Burgh perform and discuss the triumphs and failures of the music business." Pass. On the popular channel Duran Duran do great but it's one of those boring competent performances we've been seeing so much of recently; so there's not much to say.
Kim Wilde: Water On Glass [35]. Pity the poor cameraman whose job is to point his viewfinder at some water running down a sheet of glass. All his colleagues get to ogle gorgous-pouting-Kim-Wilde who is lit appropriately in the colour of envy; lurid green. Sexier than Kim Wilde is a new switch on the mixing desk. Vision Mixer Hilary West uses it to produce a very alluring wipe between shots that breaks the picture up into tiles; phwoar check out the alpha channels on that!


Depeche Mode: New Life [12]. "That is Marty Wilde's daughter, yes it is," Steve Wright informs us of this breaking pop news as he back announces the song. What POP FACT will he come up with for Depeche Mode? A nation holds its breath. Sadly we don't learn anything about Depeche Mode, except that they are "over there." (John: Here's a POP FACT- Depeche Mode are from Basildon) Steve Wright's turn-and-point gesture incorporates a groin thrust which leaves him leaning back at a bizarre angle. And take your hands out of your pockets Steve.
Bill Wyman: (Si Si) Je Suis Un Rock Star [36]. Two separate performances of this song are mixed together. One with Bill Wyman playing keyboard (lit red) and the other with him playing guitar (lit blue). The two takes are mixed together so smoothly that's it's almost possible to miss the jump from one instrument to the other and assume it's a single take. 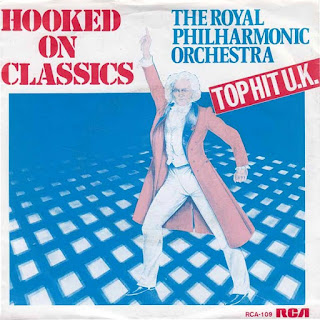 Royal Philharmonic Orchestra: Hooked On Classics [7]. 1981's Medley Fever outbreak continues. Imagine if Beach Boys Gold was cross-bred with that diabolical disco version of Toccata by Sky from April 1980. Now force the Royal Philharmonic Orchestra to play the resulting musical tragedy. No one comes out of this well. Legs & Co scamper around and look like something out of one of Nigel Kneale's more bad tempered pieces of writing where a civilisation's fall is revealed by the way it uses sex on television.
The Undertones: Julie Ocean [45]. Feargal Sharkey perches awkwardly on a chair. Has he injured his leg? He also seems cross; this is a performance of pursed lips and angry head shaking. Does he not like Designer Tony Burrough's plan to overlay pond weed onto the picture (ocean, do you see?). It looks like The Undertones are auditioning for a part in the Doctor Who story Warriors of the Deep. (John- POP FACT: The song is about Billy Ocean's sister. Or is this a POP LIE? Answers on a postcard)
Stevie Wonder: Happy Birthday [4]. Oh God, Michael Hurll is messing with the chart format again. The Top 20 Countdown clumsily runs unbroken from 20 to 4. Stevie Wonder doesn't seem to have produced an official video for this song so this looks like something the BBC have assembled. After two minutes the stock footage runs out and we fade back to the Top of the Pops studio to see Legs & Co dancing with the audience. The crowd has been given red white and blue hats, balloons and streamers; because it's a joint birthday party and wedding! And check out the red white and blue symbol of the Prince of Wales that some patriotic set decorator has nailed above the black and white screen.
Spandau Ballet: Chant No. 1 (I Don’t Need This Pressure On) [3]. In this promo film a bloke visits Le Beat Route in Greek Street and then leaves. Maybe he doesn't like the band who are playing? (John- Or maybe he just doesn't need this pressure on?)
Number One: Shakin' Stevens, Green Door. After a lengthy clip from Ghost Town, down at 2 from number one last week, we get a repeat of Shakey's visit to the Top of the Pops studio; also last week.
The Jacksons: Walk Right Now [15]. The show plays out with the audience dancing along to the Jacksons. The standard operating procedure is for the host to say goodnight and then disappear from the studio. In fact it's instructive to see how quickly some DJs can vanish. This is either something Steve Wright doesn't know, or he's the subject of a joke by Michael Hurll. Instead of cutting away from Steve Wright to the crowd -allowing for a quick bolt between camera angles- the end of this show is one long pull-back by the same camera. Steve Wright takes a quick glance up at a studio monitor and either realises that he's trapped or he's having so much fun being back on TV (he hasn't hosted since August 1980) that he doesn't care.
Performance of the Week: Duran Duran: Girls On Film.