It’s the oddest single you can imagine but there is something impossibly catchy about `Mouldy Old Dough`. It takes elements that you would never think might make a hit and somehow it works. A bouncy tune led by an old bar room piano, no lyrics except someone growling “mouldy old dough” every so often and a group with the unlikely moniker of Lieutenant Pigeon fronted by someone’s mum. Yet the tune is contagiously memorable and that piano has the slightest echo on it (possibly a result of two pianists) and you keep thinking; is this mouldy dough money or baking related? What is the song about?  Who was Lieutenant Pigeon and is he now promoted to General Pigeon? If you've never heard it, here it is...

The song’s origins are suitably quirky. It was written by two members of the group Stavely Makepeace, Nigel Fletcher and Rob Woodward and recorded in 1971 in the front room of the latter’s house in Coventry with his 59 year old mum Hilda Woodward playing one of two pianos. Despite such homespun origins the production give the piano a sharpness that makes the melody more memorable and there’s a warmth to the song despite the odd vocal moments. The group were already somewhat experimental and Hilda’s honky tonk piano playing was a regular feature of their material. Hilda was a piano teacher and bore a resemblance to Mrs Mills the world’s only other famous ivory tickling middle aged woman. For some reason record company Decca Records wanted the group to use a different name for the song hence Lieutenant Pigeon was born.
The song flopped in the UK initially but became a hit in Belgium after it was for some reason used as the theme music for a current affairs programme.  Decca then re-released it in the UK and it reached number one in October 1972 selling nearly 800,000 copies, becoming the second biggest selling single of the year and even winning an Ivor Novello Songwriting Award. Unsurprisingly it remains the only UK number one to feature a mother and son.
As for that title, it seems it is nothing to do with either bread or money but has often been seen as an adaptation of a meaningless 1920s phrase “vo-de-o-vo” which featured in songs of the period. More recently however Nigel Fletcher has said the song was actually named after a horse or possibly was an old Irish phrase. There must have been something very strong in Hilda’s tea that day! The Xmas Top of the Pops version incidentally is a hoot as the obvously well watered group mess about and sing "dirty old man" at one point instead of "mouldy old dough" and nobody claps in time! 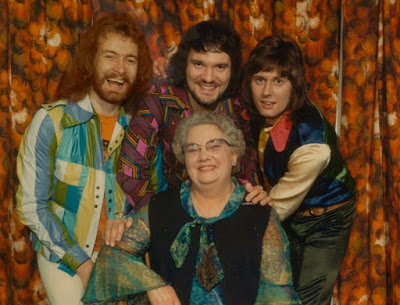 In the Seventies the appearance of Lieutenant Pigeon probably didn’t seem as odd as it does now. This was after all the period when there were hits for the Royal Scots Dragoons bagpipe band, children’s choirs and assorted blokes sporting bacofoil and glitter!
The song’s success meant that Lieutenant Pigeon became an ongoing concern for a while releasing three albums. Though follow up single ` And The Fun Goes On` flopped being a bit too downbeat and reverb heavy, it sounds too unlike them. And is Hilda even on it? They did have another minor hit though with `Desperate Dan` which reached number 17 in the UK in 1973. They continued until 1978 scoring a big Australian hit in 1974 with a cover version of `I’ll Take You Home Again Kathleen`, which sutis them perfectly though seems a bit rushed. This appears to include a bizarre high pitched backing vocal.
It's amazing what they could coax out of the same formula- the 1976 single `Goodbye` includes the flutes and pianos and no lyrics but another catchy song. They did play live on mini tours though apparently Hilda was quite prepared to tour properly but the others thought better of it!  The group reformed in the Eighties and both Woodward and Fletcher continue to produce unusual music to this day though Hilda passed away in 1999.
The song still pops up from time to time on 70s compilations and  if you’re a fan of Oldham Athletic Football Club you’ll know that the tune is played over the tannoy at home games. As if the whole thing wasn't bizarre enough, when the song was topping the UK charts, across the water Chuck Berry's `My Ding-a-Ling` was at number one in the US. And that happened to have been recorded in Coventry!! 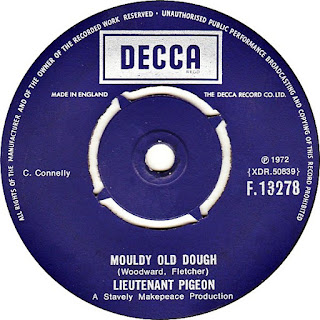