Over the last couple of years, across Liverpool, unusual graffiti styled lettering has appeared in odd places. It took a while for people to really notice and it’s only since last autumn when there seemed to be more and more of it that it registered widely. The question was- what does it mean? Surely this was some subversive political or social campaign? Under the heading `Sine Missione` there are well known quotes by culturally historic figures such as Martin Luther King, Bob Marley and others.  These appear in a stencil style writing reminiscent of certain types of street art but are uniform in colour. They sit on walls or on the side of those metal cable holders or even on the outside of pubs, exactly where you might expect to find graffiti.  However is it graffiti at all? 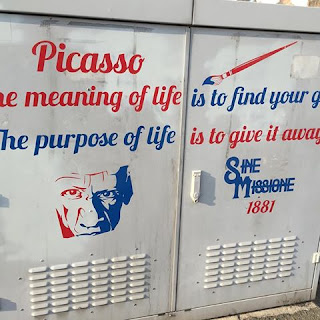 People have been puzzling about them and unlike most things Googling will not necessarily provide the answer. In fact if you Google `Sine Missione` you’ll discover it is the title of the first album by- wait for this- a Dutch Pagan folk band!
In fact the Sine Missione graffiti is an innovative advertising campaign by a Liverpool based T Shirt company though you wonder how successful it is if people have trouble finding out about it! The company has been going since 2014 and describe their T Shirts as having a deep and meaningful message on them.  10% of their profits go to charities such as Help for Heroes and the British Legion.  The moniker Sine Missione is actually a Latin phrase translating as “without mercy” and its origins  relate to Roman gladiatorial combat in which there was no possibility of a reprieve for a particular person in the contest. So it does seem a bit of an odd name for a clothing company. 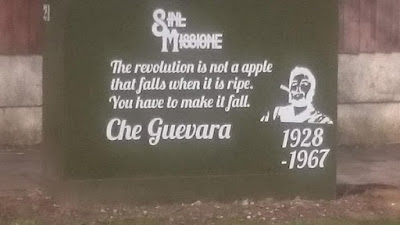 I'm not sure of the value of this kind of guerilla advertising. There's no clue on the ads that it even is an ad and as mentioned above you've a one in three chance of even coming  up with the fact that it's a clothing brand if you search fo the name.
As for that Dutch Pagan folk band they are called Omnia and `Sine Missione` was the name of their first album released in 2000. It seems it was specified as not being for the mainstream market though as it consists of “constructions of Roman and Gallo-Roman music” I doubt it had trouble conforming to that brief.
The whole Sine Missione campaign reflects a rich heritage of graffiti inspired advertising in the city. Locals will remember the word Guranga! plastered everywhere, even atop railway bridges a while back. And who can forget The Pies, a band whose graffiti advertising was better known than their music.
Posted by John Connors at 22:46