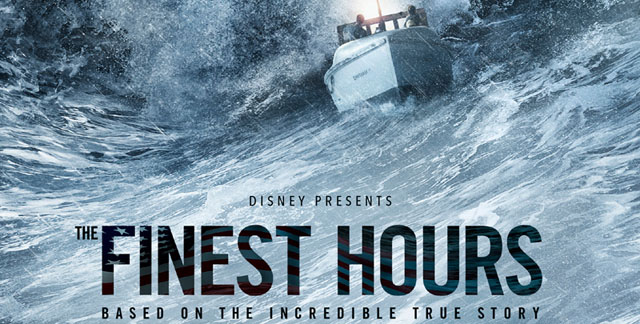 Director Craig Gillespie manages to keep proceedings grounded in reality so while there are obvious concessions to drama there is no attempt to portray the quartet as anything other than normal guys plunged into an abnormal situation. Bernie Webber their leader is played by Chris Pine who leaves behind any trace of exaggerated heroism to become a quiet but determined hero. Ben Foster is the more cynical, experienced Richard Livesey whose largely unspoken doubts about Webber;s ability are gradually replaced by admiration.  Kyle Gallner portrays the far less experienced Andrew Fitzgerald who has never been on this sort of mission before while John Magaro is Ervin Maske. All four manage to act against a torrent of wind and rain and the quest quickly becomes involving though I don’t know if it would be as palatable in IMAX 3D when in cinemas. Definitely not to be seen just after a meal! You really do get a sense of the raw power unleashed as the waves and wind combine in a deadly, twisting mess.
On the ship  -or rather half the ship-  we are in slightly more familiar territory as the Captainless survivors argue over how to respond but in Casey Affeck’s enigmatic engineer Ray Sybert  we have a very unconventional character. As portrayed here there are similarities between Webber and Sybert; both are far from being inspirational figures yet are thrust into command of a dangerous situation to which they deal with in their own manner. In both the writing and performances they remain far removed from the stereotypical action film hero though Affleck does seem to have based his performance on Jaws’ Quint.. This may be why the film fared poorly at the box office; audiences have to work to understand these figures and there is much dialogue concerning engines, waves, hull breaches and so forth. Both Affleck and Pine are so understated yet Gillespie and the script coax little moments of real humanity in the maelstrom. The film also includes a romantic sub plot as Davies' bride to be Miriam plays a rather larger role than you might expect as she tries to find out what is happening. Holliday Grainger brings a strength to a part that largely requires various shades of worry. This is the less successful side of the movie especially as Miriam’s actions seem rather dependent on the plot rather than the believable actions of a young woman from the Fifties. 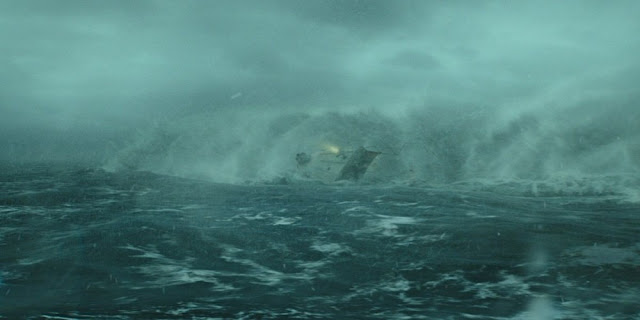 Visually we are plunged into a simmering vortex of swelling waves and merciless storms. The effects are so good that you can’t see the joins and with a lot of the action taking place overnight, the sense of danger is heightened. Whatever leeway the folm might have taken you can still appreciate what an amazing feat was achieved as the rescue boat- with room to seat 12, ends up carrying 32 survivors back to shore.
Films such as this have a fine line to tread and some may find The Finest Hours lacks the expected Hollywood beats. Others have criticised the fact that being a Disney film it is too sanitised with not much blood or swearing, both elements you feel would have been present in abundance. Yet equally some would have preferred an overdose of untenable heroics. However it’s collection of down to earth characters and the sheer heroic triumph of the rescue makes it a film with more to admire than just the special effects.