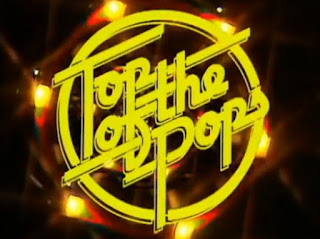 Simon Bates: "Hello and welcome to Top of the Pops. It's gonna be a great night because we've got some great live acts for you. We've got Gary Numan, and we've got stacks more because it's the last Christmas Top of the Pops before the Christmas Top of the Pops, if you see what I mean. We'll also have the top three selling records in Britain today and to kick us off with, here's The Beat. Over there!"
The Beat: Too Nice To Talk To [31]. The top of the show preview of tonight's bands has gone. Is this a permanent change to the format or was there no time to edit one together? When Simon Bates says "over there" the camera cuts to a wide angle of the studio and the lights are faded up on The Beat, who begin to play. The crowd rushes across the studio in what looks like a dangerously uncontrolled way. Still there's no harm done, except for the sound of several balloons popping on the soundtrack.