Blogmas#2 So, how do reindeer fly then?


About three Christamsses ago there were reindeer in the city centre. Not running wild because they were so quiet that would be underwhelming; actually had the fencing around them been taken away they wouldn’t have really run wild they would just have mooched about mildly. Reindeer you see don’t really seem to get excited about anything much. Perhaps they were overwhelmed by the number of people looking and pointing at them saying “ooo, reindeer” as if they didn’t already know that. Perhaps they were biding their time waiting for a slight gap in the fence and they’d spring into life charging at the gawping public nostrils flaring, teeth bared, antlers ready to kill. Or they could just have flown away. Or probably not. Had the barrier somehow become they probably would have meandered down the road gratefully accepting the food people would inevitably offer them. And therefore become very fat and unable to fly. 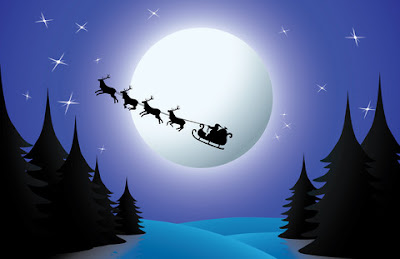 It’s a fairly established fact that reindeer can’t really fly and if you look at them how could they? A brisk flapping of hooves is just not going to provide the necessary momentum to lift them off the ground is it? So where did this idea come from? Santa Claus (as opposed to the very real Father Christmas) is based on two Dutch folklore characters called St Nicholas of Myra and Sinterklass who used to travel about a on a white steed. The first reference to flying came from the author Washington Irving in 1812 who described St Nicholas as riding “over the tops of trees” and this seemed to become an established iconic seasonal image.
Nobody has really come up with a suitable explanation for how it could happen but they might be looking at the puzzle the wrong way round. Supposing it is the sleigh that flies not the reindeer? Supposing that the sleigh is powered by a special battery that uses lunar energy which is similar to solar energy but scientists don’t want to tell us about that yet…The power encases the sleigh and the air around it in a protective bubble hence the reindeer are running on the equivalent of a treadmill on the invisible platform. This would also explain how it can speed around the world in one night. In the spirit of Christmas that makes perfect sense.