Shown on BBC4 / Reviewed by Chris Arnsby
Richard Skinner: "Welcome to the Top of the Pops studio where today we are celebrating Christmas a little early. We've got a fascinating show with some good music, some great live bands as well, and if you're looking for clues as to what we've got on today's Top of the Pops... well how's about this for a start."
Adam & The Ants: Antmusic [16]. The studio looks more like a pop warehouse than normal. Wide shots reveal a dark cavernous space with a small crowd huddled in front of Adam & the Ants for mutual security. Top of the Pops must have been allocated one of the larger studios at Television Centre and gives the impression that this programme is being recorded in a black wasteland haunted by the angry ghosts of failed music acts. On the plus side the extra space allows for some lovely sweeping crane camera shots. Then, in a new development, the camera cuts to the Eidophor screen and the Antmusic lyrics can be seen. Was Top of the Pops experimenting with karaoke? Finally, as the song ends, we get a lovely wide shot of the studio, but what's that sitting on the studio floor to the right of the picture? It looks like a mop and bucket. 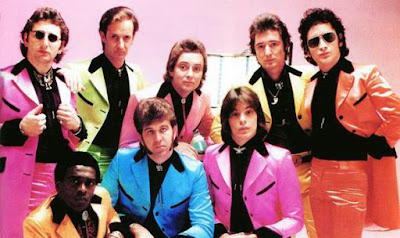