Long before Christmas pop songs (see previous Blogmas) there were Christmas carols which are altogether more serious. You can feel the weight of ages in these creaky edifices which is perhaps why their use is mostly confined to the echoey churches and cathedrals in which such hymns work. Backed by the melodramatic sounds only a church organ can pipe out, they are supposed to be a communal celebration of the season. Things is that mostly they don’t actually sound very celebratory; indeed most start up like a heavy mammal attempting to stand.  Hark the Herald Angels Sing for example feels like pushing a heavy object up a hill! The merrier ones just seem to be irritating though; have you ever enjoyed working your way through Ding Ding Merrily On High? 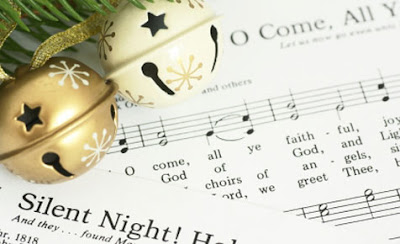 Christmas carols smell of candles, cold floors and warm scarves. What they also share is that people can only remember the first two lines. After that you have to mouth along and sing the odd key word when you realise it’s coming along. Quite possibly the only popular song to contain the words “cattle shed” is amongst the collection. So let’s all swig some mulled wine, scoff another mince pie (remembering to give thanks to the person who decided the recipe did not need actual meat in it) and pretend to sing along.
Almost my first memory of Christmas is of the carols being sung, candles lit and garlands of holly draped across the church. There is something warm and welcoming about them at this time of year whereas any other time they’d seem altogether too filling. Of all the carols Silent Night is the most enduring because it teeters on the verge of being a more traditional song rather than just a carol. In the right setting with the right arrangement it can bolster considerable emotive power. Generally though carols are trying to be joyous but doing so while being serious. They are an odd fit.
It seems there have always been carols, a little googling reveals the oldest one can be traced back to the 4th century and they actually developed from pagan chants such as that well known hit `Yea, the Sun is Really Great, Yea`, number one on the Stone Age Hit Parade. If you didn’t like carols and happened to live in 1647 your prayers, well probably not prayers actually but your wishes were granted. Oliver Cromwell, history’s biggest grump, banned carols even though they’re hardly the most fun thing. Amazingly people still sang them in secret though presumably not too loudly and without a handy church organ.
Some carols are not as ancient as they sound. That perpetual bane of spelling bees Good King Wenceslas for example was written during Victorian times. It’s equally surprising to learn that people still write Christmas carols nowadays as if the entire history of pop music never happened. John Taverner wrote one only ten years back.
Of course it is now possible to avoid Christmas carols entirely. Unlike Christmas pop songs which are unavoidable, shops and public places no longer have carols playing. Ollie C would indeed be chuffed.