[Fade up on the Top of the Pops audience with some very ostentatious dancing on display. Cut to] 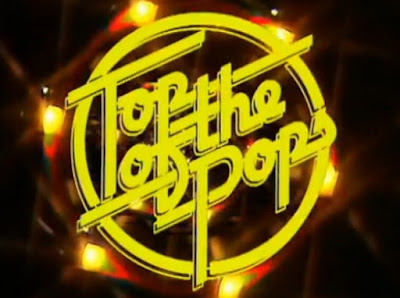 Peter Powell: Hello! As you can see we've already started but you're very welcome to tonight's edition of Top of the Pops, and a great show lined up for you needless to say! And here's just a look at one or two of the artists who are going to be on tonight's show!"


Status Quo: What You’re Proposing [27]. The crowd are very rowdy. They're still fired up with excitement after being allowed some freestyle dancing to D.I.S.C.O at the top of the programme and now Status Quo is the extra fuel being poured on their dancing fire. The band get into a muddle at the start of the instrumental. Rick Parfitt has drifted to the back of the stage, and when he wanders back there is a log jam as he and Francis Rossi try to change places. Rick Parfitt shuffles backwards while Francis Rossi has to take a couple of giant steps to avoid the edge of a rostrum. Still it all gets sorted out in time for the guitar break.

Diana Ross: My Old Piano [5]. Peter Powell has been joined by two ladies in Top of the Pops t-shirts. The one of the right looks like Joanna Lumley's stunt double. Peter Powell waxes lyrical about the shirts. "What we've been proposing.." he puns while the cameraman does an unsubtle crash-zoom to the chestal area of the lady on the left. Then we're back on film in a hotel lobby as Diana Ross continues to dance around an unattended piano. What surprises about this promo is how low rent it looks. It's a three take job. A long shot, medium shot, and close-up of Diana Ross capering around the lobby which have been edited together. Maybe they only had twenty minutes because Diana Ross had a prior appointment. Peter Powell's on a pun roll tonight. "So chicly produced," he quips, crisply alluding to the dispute between Diana Ross and Bernard Edwards and Nile Rodgers of Chic who produced the original mix for the song. Orchestral Manoeuvres In The Dark: Enola Gay [35]. It's... Dennis Waterman. Plugging his new single I Could Be So Good for You. No mention that this is the theme song for Minder, but that is a programme on the rival commercial channel. There's a bit of business involving Dennis Waterman charging Peter Powell a pound for a copy of the single which ends up being oddly charming as Peter Powell pulls out not the expected coin but a note; paper pound notes, how nostalgic. Denis Waterman is off on a tour with some of his musical friends, "Croydon, and then we go to Glasgow... Manchester, Edinburgh, Southport, Hull." Not in that order I hope. Next up are Orchestral Manoeuvres In The Dark with a song that Wikipedia claims was banned from Swap Shop because of a belief that the lyrics were a coded homosexual message; a statement crying out for a [citation needed].
Coffee: Cassanova [19]. Frenchrevolutiontastic! Legs and Co are all dressed up as Marie Antoinette. Sadly costume designer Laura Ergis ran out of material before she could finish the court dresses. Unless; could those tiny flapping fragments of material round Legs and Co's hips be deliberate? Laura Ergis went on to do the costumes for Juliet Bravo. I think we're all glad she didn't dress  Sergeant George Parrish like Lulu.
Black Slate: Amigo [9]. Back in the studio for a second week (there's been a skipped edition hosted by D*** L** T*****). The sombrero is smaller but to compensate the lead singer is now dressed as a matador. During the final pull back across the studio we get a shot of Peter Powell shuffling awkwardly from foot to foot, and then starting to clap before he realises the song is still going.


The Nolans: Gotta Pull Myself Together [25]. Dennis Waterman pulls a "phwoar" face to illustrate what The Nolans mean to him. The Nolans are on film and for the most part the promo is fairly unremarkable; some light capering around in a studio and a bit of prop work with umbrellas. Then suddenly the film crew goes on location; first to the bridge over the Serpentine, and then to what looks like Camber Sands. Fine, if you've got the money then spend it, but this seems like an odd use of resources.


Linx: You're Lying [23]: At the top of the show Peter Powell described Linx as "jazz funkers," but first he's got a new guest; Paul Jones of The Blues Band. There's a height disparity between Peter Powell and Paul Jones, and in the two shots Paul Jones towers over Peter Powell. Paul Jones is here to talk about his new album, but who cares about that when he's also doing the music between the acts on Boom, Boom, Out Go The Lights a comedy show featuring Keith Allen (ugh), Tony Allen, Rik Mayall, Nigel Planer, and Alexei Sayle. Boom, Boom, Out Go The Lights was some of the first television exposure for the Comedy Store generation, rather sweetly Paul Jones misnames the place as the Comedy Shop. He's also oddly reluctant to describe the comedy as alternative, suggesting that even by October 1980 this had become something of a notorious label.
Gilbert O'Sullivan: What's In A Kiss [36]. Now, Miss Ross, this is what you do with a piano, you sit here, and press these bits, and sound comes out.


Number One: The Police, Don’t Stand So Close To Me.


Closing titles: Ottawan, D.I.S.C.O. There's a very abrupt edit back from The Police to Peter Powell, who barely has time to say goodbye before we crash into the closing titles. This could simply be due to lack of time. The programme this week has packed nine songs into a 35 minute edit. Alternatively, one of the audience did something unspeakable during Peter Powell's outro and the whole thing had to be chopped down.


Performance of the week:  Orchestral Manoeuvres In The Dark: Enola Gay