Death Has a Thousand Faces
Proving it is possible to combine any unlikely circumstances in one script, this lively windswept second has Adam Adamant on the trial of a circuit diagram found in a stick of rock for which a man has been killed at a party Georgia happens to be at. It’s Blackpool rock and with the Victorian panache only he knows, Adamant is soon strutting along the Golden Mile with a stripy clothed Georgia in tow buying sticks of the stuff. It’s all so bizarre that it kind of works.
Second episodes are tricky to pull off and this Tony Williamson penned example manages to contain a scenario you wouldn’t expect in particular taking the characters out of London before they’ve established themselves in it. Still it’s funny to see Adamant with cloak and cane taking the pavements of the seaside town as if he owned them.


Having established a different set up, Williamson seems content to then make it similar to thr first episode. The villains are led by Madame Davario, another evil woman which makes you wonder what Williamson is trying to say. In fact there is almost a repeat of the scene where Adamant declares he’s never insulted a woman till now though her plan is a rather more nebulous enterprise to blow up the Golden Mile in the most melodramatic attempt at acquiring a brownfield site in history!
Aiding the dynamic duo is Punch and Judy man William E Simms, who sports a jacket even gaudier that Georgie’s’ and is as much out of place as Adamant is. By the end he agrees to become the latter’s butler. Much of the episode involves brash Northern character types and lots of fighting which works fairly well despite the confines of studio sets.  The plot is thin but enjoyably camp and there’s some strong direction especially during a moped chase in an underground car park though you wonder whether its safe for the railings atop Blackpool Tower to be quite so wobbly!


More Deadly Than The Sword 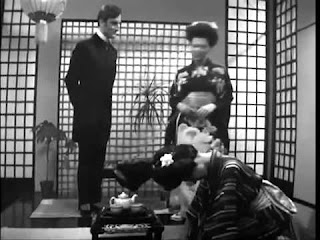 The camera being the object of danger here as a prominent politician is blackmailed in a Giesha House and cheekily assigns Adamant to retrieve the negatives. You can imagine script meetings for this series in which everyone present writes down random things on pieces of paper and they are hurled together into a plot! This time instead of Blackpool the series is off to Tokyo though of course never sets foot outside the studios as it manage to encompass pretty much every Japanese cliché into its 50 minutes.
There’s also the case that just three episodes in the series seems to have forgotten its own continuity; despite seeing his arrival last week, Georgie has seemingly forgotten the secret entrance to Adamant’s house while the man himself seems relatively au fait with most aspects of Sixties life after a comparatively brief time awake. What they don’t forget is that flashback sequence to the first episode when Adamant is knocked out as he must seemingly be each week.
The plot involves lots of people taking photos and some especially lumbering guards. Director Leonard Lewis lacks the style of his predecessors and only manages to emphasise the choreographed action rather than divert our attention from it. Thank goodness then for Gerald Harper’s assured performance which is frankly too cool for this rather dull episode.