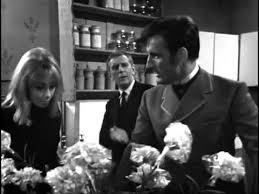 Episode 4 The Sweet Smell of Disaster
Aggressive advertising of a sinister nature alerts Adam Adamant in this crisp instalment penned by Robert Banks Stewart. A new perfume called Cloud Seven becomes an overnight sensation because the giveaway plastic blue carnations contain a highly additive perfume. Only Adamant seems to suspect something is going on, not least when he finds a giggling Simms and Georgina. His means of investigation is the opposite of undercover as he simply walks in to the company’s headquarters to confront its director Benjamin Kinthly.  The latter has definite dictatorship traits and an ambition to match which actor Charles Tingwell exploits to the full.


Banks- Stewart is an economical writer who keeps the pace at a steady canter and delivers enough character to make this episode more distinctive than its; two predecessors. Gerald Harper is on vintage form as he battles Kinthly verbally and later physically. The episode even finds a more satisfying place for Miss Jones, who thus far has given the impression of barging into scenes she isn’t really needed for. Here she gets a decent slice of the action and if Adamant’s unwillingness to let her be involved is becoming a bit tiresome, then this episode provides the perfect opportunity to drop it. One suspects though that rather like the sequence they play during Adamant’s weekly unconsciousness, it might be here to stay.
The episode comes loaded with plenty of ahead of its time business speak; Kinthly’s rapacious ambition is more likely to conjure an image of Apple than a perfume company especially when he announces the firm will sell direct to the public through its own shops. Robert Banks- Stewart’s smart observations of business practice and ambition mean the episode does not seem as dated as others. However I doubt if any modern drama would choose to climax with a fight in a pile of foam!


Episode 5 Allah is not always with you 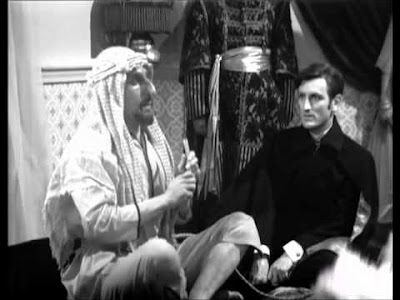 In which a gambling club is at the centre of a plot to assassinate a Sheik because no plot is too quirky for this series! This is only the fifth episode yet feels decidedly familiar even though it benefits from some more arch fish out of water responses from Adamant as he ventures into the amusingly named Fluffy Club. Being the BBC in 1966 this is not quite the sort of club you imagine it’s meant to be!
It all starts when a girl at the club is attacked yet manages to catch a taxi to Adamant’s place in the car park presumably because he’s been advertising suave crime busting services in the local paper. She dies after giving him just enough information as to the potential plot and he then again warns Georgina off the whole thing only for her to again turn up undercover when he ventures into the club. This provokes the episodes’ best scenes as he piles disapproval on the whole place yet later persuades Georgina to join him for “a quiver or whatever it is” on the dance floor. You can understand his consternation though as the people already dancing appear to all be grooving away to separate songs (maybe they’re all wearing iPods) while a tinkly piano bashes out pop hits. I wonder if there’s an early incarnation of Lieutenant Pigeon in the back room.
Gambling sequences from James Bond to Westerns to modern day dramas are always duller than dishwater and the ones here are no exception. Rather more odd to modern eyes is the casting of a white English actor as the Sheik. It’s the sort of thing they’ve already done once before in this series and while it may reflect the lack of Middle Eastern actors at the time but it looks tacky these days. Still this is an episode filled to the rafters with racial stereotypes which is maybe why Adamant himself is even more urbane and English than usual.
The series’ recurring motifs are present and correct- yes, he gets knocked out and they play that same sequence again, yes there are choreographed fisticuffs in which Adamant’s assailants are polite enough to attack one at a time. These are offset though by lengthy dialogue scenes in which various characters either try to charm or to threaten others and it all becomes –in the vernacular of the club’s main attraction- a very long game indeed.