When the first episode of Humans was broadcast earlier this year it netted Channel 4 nearly 7 million viewers, one of its largest audiences for some time and overall the series is the highest rated drama ton the channel since 1992. That may be because there is something intangibly fascinating about Humans even though it seems to touch familiar bases. There have been so many science fiction stories in this area that it is difficult to think of a different angle – and even this script namechecks Asimov- but the route taken gives the show the biggest chance of success. The clue’s in the title. There may be robots aplenty but this series is about humans, about being human and what it means and whether robots can become like humans. Humans deals first and foremost with what might be our emotional response to having some sort of robots in our everyday lives.

In an alternative present day synthetics or synths as they are known have become a regular feature of society. They do the menial work that people would rather not do like domestic chores, handing out leaflets and so on. They resemble humans but their stillness, economic movement and green eyes tell a different story. The series centres on the Hawkins family whose new synth Anita shows occasional signs of unusual behaviour and also has an effect on each family member. We also follow the trail of a group of augmented synths led by Leo Elster (the son of one of their inventors) who seem more human than their counterparts and have a secret. There’s also strands about two specialist police officers and the ailing co-creator of the original synths. Rather cleverly this series of seemingly separate storylines converge later on as Humans moves from initially seeming like a mood piece of modern sci-fi to become a thriller about family and freedom.
The pace is slow and cold at times. Sparse incidental music and long scenes create an unsettled vibe that seems appropriate for the way the Hawkins; seemingly carefree middle class idyll is upset by incidents that all seem to stem from their new synth.  Each family member has their own response to this new arrival. Those used to a more melodramatic pace may find the first half of the series too sluggish because it hinges on tiny behavioural moments rather than anything grander. The reward is how these build to a faster paced second half. The way the stories dovetail together is also effective though strangely this is an aspect that some critics didn’t care for. Each builds on the idea of a family whether real or created, through memory or because of loneliness. By pulling apart the ties that bind both the Hawkins family and the band of augmented synths it only makes them stronger in the end.  Yet this is not a cosy drama by any stretch. When threatened we see a different side to Leo’s group who are capable of unexpected acts of violence. 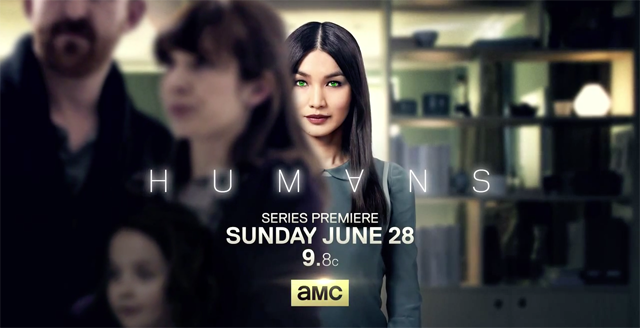 In a slow burn drama like this much depends on the effectiveness of the actors and in that respect Humans is quality. All of the synth actors achieve remarkable results, similar yet with different characteristics. Katherine Parkinson excels as Laura Hawkins, the troubled mother who always does her best for people and becomes the unexpected hero of the piece. The way Laura slowly evolves from outright hostility to Anita, to curiosity, acceptance and finally assistance is always convincing. As Anita Gemma Chan’s controlled demeanour and delivery is brilliant so much so that it is a shock to the viewer when she behaves differently. There are strong performances too from Emily Berrington as the least predictable synth Niska, Tom Goodman Hill as avuncular but flawed father Joe Hawkins, Colin Morgan as the desperate Leo Elster, Ivanno Jeremiah  as always upbeat synth Max and William Hurt as Dr Millican beset by frailty yet still fighting.  While Danny Web’s calculating Professor Hobb certainly fits the bill as a dangerous antagonist the actor is careful to add subtle layers in support of the script’s nuances. There are no easy answers to the various dilemmas and the series admirably refuses to simply present characters as good or bad.
It is a testament to the success of Humans that by the end you are rooting for all of the characters, whether human or not. It would be wrong to give away all of the plot developments because it is well worth watching the series through from start to end to experience something a bit special.