Shown on BBC 4 Reviewed by Chris Arnsby
Mike Read,"...."
The unkindest cut of all. An abrupt edit means Top of the Pops begins in media res with Mike Read already describing the delights on offer in tonight's programme. Whatever did he say that was too hot for BBC4 to handle? We will never know. That moment is lost to us like a tear in the rain. 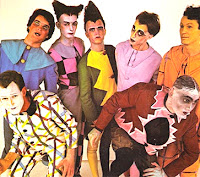 Black Slate: Amigo [35]. A very laid back opening to the programme. The song is nice enough but it can't compete with the lead singer's giant sombrero.
Split Enz: I Got You [22]. Leo Sayers pops up in a burst of pre-recorded applause to co-host the show. An explanation of how he and Cliff Richard swapped songs (Leo Sayer wrote Dreamin') allows Mike Read to do his hilarious Cliff Richard impersonation which always goes down a storm when Mike is playing tennis with Cliff and Sue Barker. I Got You should not be confused with the Sony and Cher song.

Diana Ross: My Old Piano [13]. "I have a ball/with my old piano" lies Diana Ross as she dances uncertainly around one in what appears to be the lounge of the Bide A Wee Hotel in Paignton. Diana Ross finally sits down at the business end of the dread instrument after circling it a few times and checking for traps. She's not actually going to play the thing, but some clever camera angles and a bit of arm waggling will suffice.
Queen: Another One Bites The Dust [7]. Legs & Co stalk down a corridor set. With it's use of crash zooms and strobe effects the routine ends up looking like an early title sequence for The Clothes Show.
Ottawan: D.I.S.C.O [8]. Russ Abbot invades the stage after some dull pop news. He's dressed as Teddy Boy Vince Prince and astonishingly his claim to have a record out ("The Space Invaders Meet The Purple People Eater") is true. You can watch the video on Youtube if you want. The arcade game Vince plays at the start of the video is Asteroids not Space Invaders; this is what happens when you cut corners on research. Ottowan are also on video, so far only Black Slate have appeared live in the studio (Split Enz were repeated from the 11/09/80 edition presented by J*mmy S*v*l*). Top of the Pops must have only been allowed 20 minutes recording time this week.
Shalamar: I Owe You One [16]. Shalamar are also on film. Is Mike Read so unpopular that no one wants to be in the studio with him?
Linx: You're Lying [43]. Linx don't have any strong feelings for Mike Read so they're happy to be the second, and last, band to appear live on this edition of Top of the Pops. Linx look pretty cool and happening, until the keyboard player turns round. He looks like an embarrassing uncle. I shouldn't be unfair on the man, he seems to be suffering from some terrible spinal compression caused by the massive "portable" keyboard he wears on a strap round his neck.
Number One: The Police, Don't Stand So Close To Me. Written on the blackboard behind Sting is the favourite joke of all Latin teachers, "Caesar adsum jam forte." (Caesar had some jam for tea). The whole thing goes "Caesar adsum jam forte/Brutus aderat/Caesar sic in omnibus/Brutus sic inat". Actually whoever wrote it on the blackboard in the promo film got the last two lines wrong. They've written "Caesar sic on omibus/Brutus in his hat". And in a nutshell that's everything wrong with the state education system. If they spent more time learning Latin jokes by rote there would be less time for lusting after the teachers. 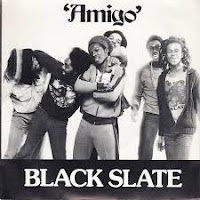 Closing titles: Change, Searching [24]. Time for some clowning around before the end of the show. An hilarious two Ronnies impersonation with Leo Sayer on his knees as Corbett, and Mike Read with a balloon up his jacket as Barker. Then Russ Abbot comes on dressed  as Cooperman, pretends to fly, and takes a painful looking fall onto the studio floor.
Performance of the week: It's a choice between Black Slate and Lynx. Fine, let's say Black Slate: Amigo.