29/10/1987: Steve Wright: “Oh look!! There you are!! Good evening!! Welcome to the Top of the Pops!!” Gary Davies: “Hi, nice to see you again. We have a terrific show lined up for you. In the studio tonight we have Ray Parker junior, we have Scarlett Fantastic, and Rick Astley.” Steve Wright: “And we have Style Council and Wanted!! Right here!!”

26] THE STYLE COUNCIL: wanted. I'm restricting myself to one complaint about Steve Wright, in the hope it will reduce my overall number of bizarre rants. Look at him. All he has to do is turn and point but that's not enough for the mad-man of radio. He's too kerazy. It would be boring and kinda square. Instead he turns side on to the camera and sticks his tongue out. Wacky-doodle! We are less than one minute into this Top of the Pops and I'm in a sour mood.

Paul Weller isn't. He looks happy to be in the studio and he's apparently blacked out one of his front teeth for larks (I apologise in advance if he has some terrible dental problem of which I'm unaware). Why is he in such a good mood? Maybe because he's facing away from the flickering ceiling lights which Geoff Beech has decided to shine direct into the camera. It must have been received as a good idea at the time but the result is, it's difficult to spot Weller through the stroboscopic haze of his close ups. During the closing camera crane pan across the audience, watch out for the girl who flashes twin V-for-Victory signs at the camera. It's a classic brief moment of audience misbehaviour, and her friend throws a guilty look back as if she expects the camera to come screaming across the crowd and eject the pair for bad behaviour. 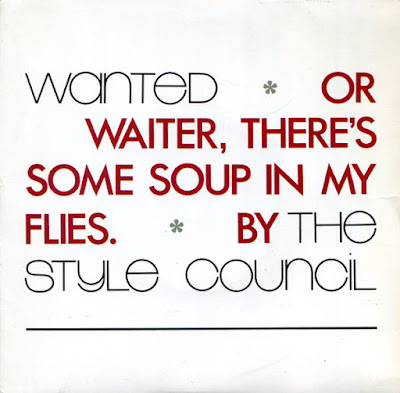 [2] GEORGE MICHAEL: faith. On video. Steve Wright ends his link into the video with the phrase, “like this.” How many times does he use it in one 30 minute programme.

[11] RICK ASTLEY: whenever you need somebody. Keep your eye on the bottom left hand side of the screen as Rick's caption fades. There's a bloke standing there in jeans, a white t-shirt and sunglasses and, well, this is what he's doing; he walks in from off screen already pointing directly at the camera, he then very slowly extends his other arm almost as if he is dropping into a standing-on-a-surfboard stance, he then continues to slowly extend his arm backwards as if he is reaching out to grasp the arm of the audience member standing just behind him. What's that all about? “Whenever you need somebody I'll bring my love to you,” that's great Rick but I have a leaky tap and I need someone to bring a cross-head screwdriver and a monkey wrench.

The Top of the Pops clip of Beethoven (I Love To Listen) is different from the official video on Youtube (which is fantastic, by the way). Did Top of the Pops use an earlier edit? 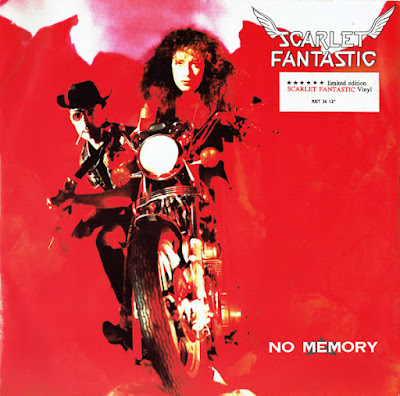 [30] SCARLET FANTASIC: no memory. Gary Davies, “the last time I introduced these people on Top of the Pops was three years ago when they were in a band called Swans Way and they had a big hit with Soul Train.” Gary was joint hosting that week with D*v* L** Tr*v*s, which is why I don't recall Swans Way. They were skipped by BBC4. Mind you, I don't remember Scarlet Fantastic either.

Mystery Man is back, he can be spotted during the first long camera zoom in shoving audience members around. It must be Floor Manager Iain McLean.

Scarlet Fantastic are performing in the same scenery gap as The Alarm (15/10/1987). This is the space where you'd normally expect to find the Stargate stage on the floor plan. Has it been retired? Was the Pet Shop Boys appearance on the Stargate stage (22/10/1987) pre-recorded?

The Roxy Playlist (27/10/1987): Then Jericho, Muscle Deep; Was (Not Was), Walk The Dinosaur; Black, I'm Not Afraid; T'Pau, China In Your Hand; The Style Council, Wanted;  Rick Astley, Whenever You Need Somebody. On video; Bee Gees, You Win Again. Studio guest Andy McKay, from Roxy Music.

Performance of the week: Scarlett Fantastic, No Memory.

Janice Long: [to one of the people by her side]... I'm leaving you lot standing. [To camera] Welcome to Top of the Pops. Tonight we've got George Harrison, we've got Eric B and Rakim, we've got loads of stuff, and now technical jargon spout forth.”

Mike Smith: A world first*. We're in stereo tonight. Unfortunately only in the London area. We are joining up with Radio 1.1053 1089 around the country on medium wave. London and the south-east, the first of the areas to go stereo this week on 104.8FM. So if you want to hear us in glorious stereo tonight 104.8FM. That's our new logo to go with it as well. Just get your radio out now and we'll be there. To get us going in stereo this evening we have a superb band. T'Pau.”

*A world first everywhere except America where Top of the Pops USA is already being broadcast in stereo (where available). 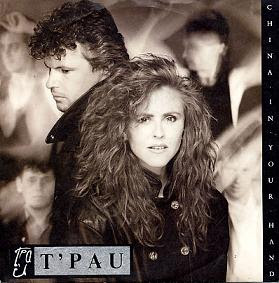 [5] T'PAU: china in your hand. Rejoice. Rejoice. Radio 1 is now Radio 1FM. Although you wouldn't know if you looked at BBC Genome. The data diligently lists regional variations of BBC1 but not Radio 1(FM) so checking online for 05/11/1987 shows Bruno Brookes crashing in to Janice Long at 7.30pm. Top of the Pops doesn't get listed on Radio 1FM until 01/09/1988 at which point frequency modulation was available over a large enough part of the country to make it worth changing the listings. Presumably, all areas still listening to Bruno Brookes through a tin can tied to a piece of string heard him bid goodbye to FM listeners at 7pm, and then carry on until 7.30pm when it was time for Janice Long/Simon Mayo/Liz Kershaw; depending on where in time the listener was between 05/11/1987 and 01/09/1988.

Stanley Appel (Producer and Director) has had a word with Geoff Beech (Lighting) about his flickering excess last week. T'Pau start in a darkened studio with the neon lights behind the main stage flashing slowly in time (more or less) to the music. I get it. Geoff's going to wait for the heavy beat on the chorus and bring up all the studio lights at once. Nope, Geoff's sulking about Stanley's constructive criticism (this sound more like Eastenders) and the lights stay set on sombre for the whole song. It actually looks really good. The band are picked out by individual lights so they stand out from the dark background, but the ceiling lights behind are set at a low level, so shots of T'Pau looking up from the studio floor have the illuminated lighting grid in the background but not at a high enough level to overload the camera or the eye of the viewer.

[32] HEARTBEAT: tears from heaven. Pay attention during the long opening hand held camera shot. It starts on Janice Long as she introduces Heartbeat, wanders down a set of stairs, and then around the band. It's great because it gives a series of wide views of the studio and lets you plot out the geography. And, what's this? The Stargate stage is back again; slotted in between the main stage and the one being used by Heartbeat. I wish they'd make up their minds about whether it was going to stay or go.

There's another long hand held shot at the end. The camera drifts behind the band and then up a different set of stairs to where Mike Smith and Janice Long are waiting. It's a very smooth shot, has Steadicam made it to Top of the Pops? 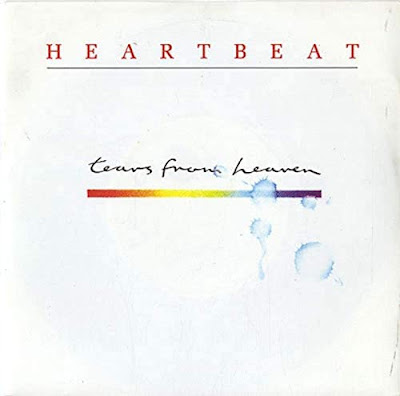 [11] F.MERCURY & MONSERRAT CABALLE: barcelona. On video. The caption reduces Freddie to F. because otherwise it's too long to fit. When I was at university I'd hang out in Burger King (paid promotion) and was fascinated to realise all the pop music they played in the background was cover versions. The company clearly didn't want to pay licence fees to use the originals and it must have been cheaper to get in bands to rerecord songs. Which was fine, until some unlucky pair drew the short straw and had to cover this track. My memory is the woman singing Monserrat Caballe's part did a pretty good job, it was the bloke covering Freddie Mercury who was unexpectedly terrible.

Only two Breakers this week. Top of the Pops used to distinguish between New Entries, that is new songs which entered straight into the Top 40, and songs which broke into the Top 40 after release which they called a Chart Entry. That's stopped and now everything is just marked as a New Entry.

[28] ERIC B. & RAKIM: paid in full. More Steadicam mucking about as the camera wanders down the stairs to the Stargate stage to finds Eric (the half a) B. and Rakim (eventually, for the introduction he's hiding off stage). The camera spins round and round Eric B. It looks fantastic. As the introduction goes on Priscilla Hoadley (Vision Mixer) uses Quantel transitions to flip between camera angles -I think this might be the first time they have been used in a performance, rather than to transition in and out of performances or videos. It looks a lot more dynamic and gives a different energy to the performance than just cutting between cameras as normal.

[1] THE BEE GEES: you win again. On video again, so a second chance to check out Brimham Rocks.

Performance of the week: Eric B. and Rakim, Paid In Full. 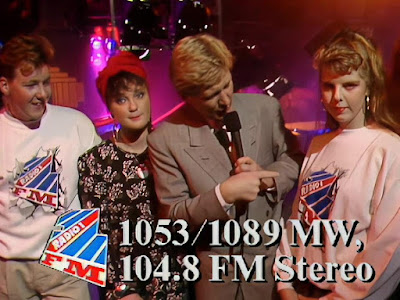