Sherlock’s little sister takes on the world in superior sequel- and the first film is quite good, too!

Sequels are tricky and often in a film series the second one is a bit of a dip, yet Enola Holmes 2 is bigger and better than its predecessor which was quite good anyway. The confidence the team has is visible on screen. Whereas the storyline of the first was rather meandering and not sufficient for the run time, here there is plenty of incident and, crucially, it is more of a mystery that needs to be solved. Bigger and broader though it may be, the film does not lose the moral undertow that makes the character so empathic in these times.

Enola has set up her own detective agency (not sure where the money came from?) but cases are non-existent as her older brother’s reputation grows and people assume she’s just his assistant. That is until a young girl asks her to find her missing sister. She is Sarah Chapman; a real historical figure and the story takes elements of this along for the ride. The resulting trail takes us down into the lower reaches of English society, specifically to a match factory were the young girls who work there do so under a strict regime and seem to be falling ill to typhus. The seemingly unimportant detail of how the process of making the matches has recently changed is the key to opening a wider plot of corruption.

This all feel like a much juicier case for young Enola to embark on and she does so with her usual fervour. The harsh world she inhabits, only shown briefly in the first film, becomes a vital part of this one as Enola goes undercover in the factory and will later visit a noisy pub and even a theatre. An undercurrent of violence stalks her every move with several well composed scenes of peril each of them upping the stakes.

Other characters are worked into the narrative far more smoothly than first time round especially Sherlock who is quite a presence here with a wry humour that some other versions don’t show even though this has inspired the ire of some Holmes devotees. “I like this version of you” says Enola and it is essential with a well-worn character to sometimes alter things a bit. The film also develops the charmingly verbal relationship between Enola and the now Lord Tewksbury as well as Enola’s mother Eudoria and her helper Edith.

One of the most enjoyable aspects is how Enola isn’t some smooth mistress of disguise- her attempts at fitting in whether in the match factory or later at a ball are filled with doubts, faux pas and just about managing to fulfil her aims but only by the skin of her teeth. These scenes are fun to watch and fashion a heroine who is likeable, a trier who does the right thing sometimes at considerable discomfort for herself. Yet Enola is very resourceful and those fourth wall breaking lines or looks delivered to us carry the viewer along. If at times it does give a sense that no real harm will come to anyone and that this is all a jape, that is soon dispelled by one of the violent fight scenes or chases that pop up. 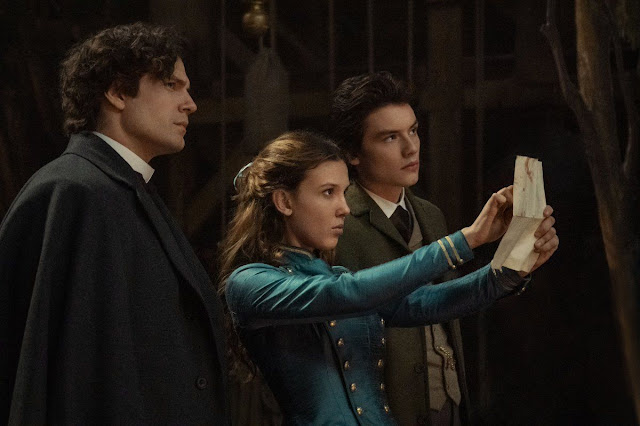 The storyline deftly includes real historical events at the factory while burning through the narrative is an indignation at working conditions that drives Enola’s wish to get to the truth. More than just a clever murder- mystery this is a film making a point and doing it well. By working together, the disparate bunch gets results while this storyline retains the strong feminist theme of the first film as well as telling one of the first great industrial relations stories. The real Sarah Chapman gave female workers a voice at a time when many men believed women should not be working at all, something that is referenced in the film when visitors to Enola can’t believe she is running her agency. Elsewhere there are plenty of interesting historical details especially about the secret language of flowers.

The cast are all tremendous knowing exactly how to pitch roles that could easily become over the top. Millie Bobby Brown excels again as Enola, a character who is easy to warm to and who despite her considerable skills never seems completely in control. Brown has a lovely comedic timing that she uses both verbally and in the action scenes. Henry Cavill goes some way to making Sherlock a more understandable character (most portrayals make him seem like an alien!) while Helena Bonham Carter as the eccentric devil-may-care Eudoria gets more into the action this time as does Susie Wokoma’s wonderfully sarcastic Edith. Louis Partridge’s Tewksbury is brought into the centre as well especially as the character’s reformist zeal complements Enola’s investigations. The actor successfully manages to make the transition to a more adult demeanour without the character losing the principles he had. Scenes where he teaches her to dance and she teaches him to fight – both in a few minutes- are a delightful role reversal from the usual. This kind of film needs a good villain and David Thewlis is on hand to give us Superintendent Grail, a pale stick wielding man whose motives are hidden as he makes for a very difficult foe to beat. Lurking somewhere in the background too is Sherlock’s legendary nemesis Moriarty and the way that plays out is a surprise that should not be spoiled.

The pace of the film is much more even than the first and home to several outstanding set pieces notably a historical equivalent of a car chase albeit with coaches. I love the way it apes a modern sequence yet using historic vehicles. Best of all is a thrilling final confrontation involving multiple dangers taking place in the appropriately dramatic location of a theatre.

It’s odd that while the first film was originally intended for cinema release, it seems a lot smaller in scale than this sequel which ramps up in every area. It looks more expensive; it is more ambitious, and has the heft of a big screen release, yet it will likely never see your Odeon. Which is a shame because this is a proper Big Film that I’d have liked to have seen at a cinema. There’s talk of a third and I really hope that happens.

Meanwhile if you’ve not seen either you really need to watch the first film first! 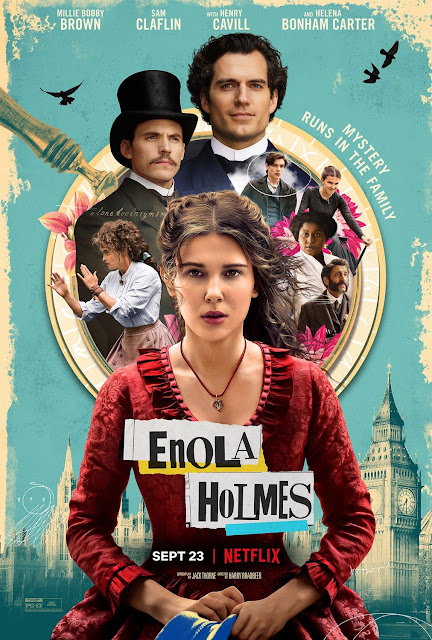 Enola Holmes is the teenage sister of the already well-known Sherlock whose gift for deduction seems to run in the family. With both her brothers away, her mother disappears mysteriously so Enola sets off to discover her whereabouts. Using the decidedly unconventional skills Mrs Holmes taught her growing up (ju-jitsu, codebreaking etc!) she seems preternaturally equipped to deal with the outside world. Unlike both of her taciturn brothers she’s also more sociable.  Headed for London by rail she encounters another runaway, the Marquis of Tewksbury (he’s locked himself away in a bag!) and their stories become intertwined when a henchman’s attack leads them to leap from the train and continue their journey using their wits. On arrival in the big city, they part company but somehow their fates are linked. Intended as a big screen film but moved to Netflix due to the closure of cinemas in the pandemic it suits the platform better.

Proceedings can sometimes seem a little tame though there is plenty of detail and a welcome mix of fact and fiction as the drama explores feminism, the Suffragettes and its developments are tied to real life events albeit in a simple way.  The narrative is more interested in establishing the colourful central character than it is in creating an exciting adventure for her so we have her musing on her name (its spells Alone backwards)and many other things direct to camera in a manner more reminiscent of vlogs. There aren’t enough dramatic sequences especially during the first half and the plot seems unable to decide its priorities resulting in some overly contrived developments, especially the way Enola and Tewksbury keep meeting. Why not just keep them together the whole time? Holmesian deduction is also minimal though instead Enola works her way through secret messages and rendezvous’ making it seem more like a spy drama than a detective one. Not such a bad thing as it leaves some clear water between this and the overly familiar world of Sherlock Holmes.

Yet when the drama does catch fire, it’s really good. Stranger Things’ Millie Bobby Brown is terrific as Enola and really suits the style of frequently breaking the fourth wall. Her performance is full of life and curiosity which must have been fun after the grim experiences of her most famous character. She also sparks with Louis Partridge who plays Tewksbury, and it makes for a fun dynamic whenever the two of them are together. Playful sparring and a clear connection are played with subtly by both.

Though ostensibly an elongated cameo with additional clips Helena Bonham Carter is great as Mrs Holmes bringing a caring eccentricity to motherhood even if her disappearance is a somewhat odd scenario. As Sherlock, Henry Cavill joins am impressive list of actors who have walked this path and his take is a little lighter as a contrast to Sam Claflin’s sneering Mycroft who could easily be the villain without changing his behaviour. I’m not sure mixing them in with the narrative does as much as it could and wonder whether the two kids should carry it alone.

Jeopardy is not as frequent as it could be there are some powerful action sequences including an attack in Limehouse by a positively scary Burn Gorman as a killer sent to despatch the Marquis. Just his scary look is enough to chill the bones and the sequence is extended with inventiveness and drive as Enola uses the hidden tools of the Suffragettes to defeat him. There’s also a dramatically staged stand -off near the end set in an atmospherically shadowy long hallway which includes a genuinely surprising reveal.

The direction captures both the bucolic countryside and the busy city and it’s a pity that having collected so many strong elements, the story itself is weak in places.  A generous two hours running time means it is stretched too far to reveal its slight contents which is perhaps why Enola has so much to say! Yet it remains enjoyable and there is even a sequel, return to top…