Your guide: Chris Arnsby. Peter Powell: “Hello! It's hit, after hit, after hit! For tonight's edition of Top of the Pops!” Simon Bates: “Hi. Try this one on for size. It's about a guy who wants to be on a prime TV talkshow. Anything but Jonathan Ross. Marillion, and Incommunicado.”

[6] Marillion: Incommunicado. Oh god. Fish is wearing a tie with a fish on it. It looks like a kipper tie. And his name is Fish. It's a double-fish Fish. Oh my sides. I'm sure the lyrics are equally clever but Marillion are a bit inaudible tonight. It could be a problem with the studio setup or maybe the single sounds like this (I don't care enough to check) but, regardless of cause, the opening line sounds like: “I've been wigjin my nitra if only I could rem-memba your nay-ayme.” The rest of the song doesn't get much better. Occasional words penetrate the audio fug. Oh. Is that another joke? That the song Incommunicado, is literally incommunicado. 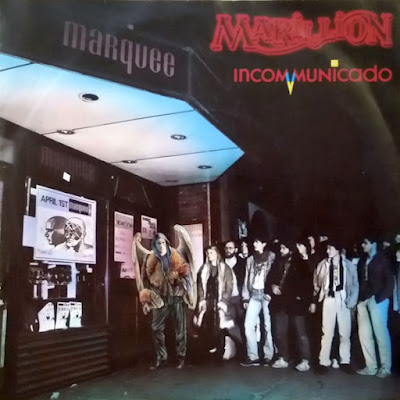 [14] Wet Wet Wet: Wishing I Was Lucky. Incommunicado left a massive blank on my memory but I remember Wet Wet Wet's debut. My mum was very taken with Marti Pellow, and said she thought he had a lovely smile. His smile is alright, mum, but being the good-looking one in Wet Wet Wet isn't difficult.

[11] Cameo: Back And Forth. Not a bad song, and it's a pretty nifty performance. I like the way the four piece band have, apparently, requested three microphones so at any one time, the one who isn't singing stalks to the back of the stage to dance. Also, the chorus is very catchy. I defy you not to find yourself lying awake at 3am muttering “back and forth and back and forth.” The problem is, this isn't Word Up. That was a magnificent performance, and the song was really in your face. Whereas this is much more mellow and laid back. It doesn't have the same impact. Top 40 Breakers. Brian Whitehouse is directing again this week. Last week he deferred to Stanley Appel, Michael Hurll's other occasional stand in, and went with Appel's preferred format for the Breakers.

Michael Hurll's obviously had a word. This week the Breakers are done as Hurll likes them, with each song being introduced in voice over as the clip starts. [26] Donna Allen, Serious; [25] Johnny Logan, Hold Me Now; [23] Bruce Springsteen, Born To Run; [18] Tottenham Hotspur FA Cup Squad, Hot Shot Tottenham. This last clip is footage from Blue Peter. Was “Hot Shot Tottenham” really too mean to make a video for this song? If this performance was lifted direct from Blue Peter why does it use slightly different match footage? Did Top of the Pops edit together its own clips from Match of the Day, and if they did, why? Licensing reasons? These are the sort of questions which keep me awake at 3am in the morning mumbling “back and forth and back and forth,” to myself until the cat leaves to sleep in the spare room.

[10] Whitney Houston: I Wanna Dance With Somebody. This seems like a big deal for Top of the Pops. Whitney Houston didn't fly across the Atlantic for either of her 1986 songs, but here she is for one week only on her way to the Montreux Rock and Pop Festival.
It's a charismatic and energetic performance, and Whitney Houston makes it look easy.
Top 10 Charts.

Performance of the week:  Whitney Houston: I Wanna Dance With Somebody 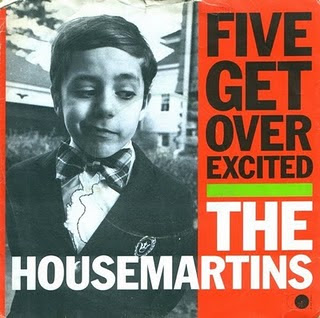 [13] The Housemartins: Five Get Over Excited. This week I am cross about countdown clocks. There have been three live editions since the 23rd of April and the copies I've been watching (downloaded from a mayonnaise jar on Funk and Wagnalls' porch at https://mega.nz/folder/h0snQACa#uiNNqosfbdrfzODHsE1clw/folder/kpVhQAqJ) are all digitised direct from the BBC archive. Shh! Don't tell anyone. They'll be furious.

The regular non-live editions all have standard BBC countdown clocks, but the three live editions are each differentt. 30/04/1987 starts with a regular black and white 30 second clock with the label “TOP OF THE POPS TX 23-4-87 OPENING TITLES”. 07/05/1987 has the same clock with a different caption! This one is labelled “P AS B” (programme as broadcast). This edition starts with a 10 second countdown, just labelled “TOP OF THE POPS TITLES”, and it's coloured orange! Sort out these inconsistencies Michael Hurll, you're supposed to be a respected international broadcaster.
The recording starts with a brief bit of studio chatter. Mike Smith says to the crowd, “30 seconds!” Then there's a pause as someone nearby chats to him and he replies, “yeah about that... yes I thought so. [clears throat] My gosh you're going to enjoy this. Anybody brought a torch? [a smattering of laugher from the crowd around him]. Having a little bit of trouble seeing in here tonight [audio fades].” It's odd to imagine Smith, the audience, the Housemartins, the studio technical crew, and assorted hangers on, all standing silently waiting those last few seconds for the programme to begin.
I have no idea what Mike Smith's banana comment is about.
[16] Bruce Springsteen: Born To Run. On video.
[7] Mirage: Jack Mix II. “One of the biggest climbers on the chart this week is a curious thing called Jack Mix II by Mirage, they're from Paddington!” Mike Smith is amazed and rightly so because when Jack Mix II starts it sounds like it could be an early rival to sample-heavy songs like Pump Up The Volume or Say Kids What Time Is It? Mirage are a trio who bounce energetically but all their bouncing can't conceal the truth. This is a medley, of the type that clogged up the charts in 1981; Enigma's I Love Music, Starsound with Stars On 45, Startrax and Startrax Club Disco. Mirage are not sample-based dance pioneers. They're just Gidea Park, with better hair. They're harbingers of Jive Bunny. 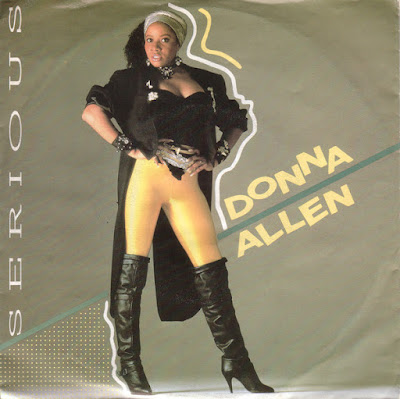 [15] Donna Allen: Serious. Standing next to Mike Smith is an incredibly overexcited young woman who shrieks all the way through his introduction. Despite being loud and nearly shouting herself hoarse, Mike Smith's got the microphone and so all her effort is inaudible. Are the BBC commissionaires going to be escorting her out of the studio during Donna Allen?
Meanwhile, Donna Allen is joined by a Mystery Man who dances and handles the rap bits. Mystery Man suddenly appears at the back of the stage. How did he get there without being seen on camera? The only obvious way is by crawling through the triangular gap between the base of the scenery and the stage. I'd like to have seen that. (Close analysis of the footage later reveals this stage has two layers of scenery and the top of a set of stairs can just be seen between the two layers).

Top 40 Breakers: Mike Smith is flanked by two women. It's the shrieking one from earlier and her mate, and they've both now got masking tape over their mouths. “It's got very quiet round here hasn't it,” says Smitty -who was setting up a bit earlier, and I fell for it. [27] Pepsi & Shirlie, Goodbye Stranger; [26] Gary Moore, Friday On My Mind; [23] Erasure, Victim Of Love. -the last one is Michael Hurll's holiday footage, sorry specially commissioned material for the Montreux Rock Festival. 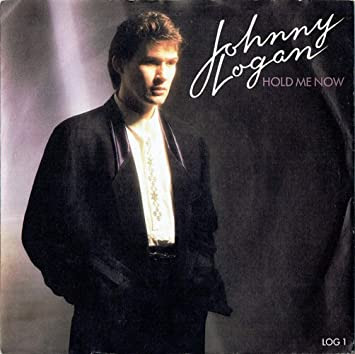 [3] Johnny Logan: Hold Me Now. Johnny Logan returns to Top of the Pops following his second Eurovision win in Brussels. How did Rikkkkkkkkkkkkkki, the UK singer, do? 14th with 47 points; almost as well as Sam Ryder this year. Johnny last trod the stages at Television Centre in 1980 when I described him as “Mr-Light-Entertainment. He's singing a song which includes the words "pain" "crying" "fear" and "alone" but he might as well be singing about boiling an egg.” Has he got any better in the intervening seven years? Not really, although at least he's not putting his hands in his pockets any more. There's a moment of supreme cheese towards the end of the song when he crouches down and gazes into the eyes of a front-row audience member for the line “what do you say when words are not enough?” Johnny Logan is singing on a stage decorated with perspex triangles and pyramids, and frankly I'm more distracted trying to work out if these are repurposed set dressing from the city of the Masters in The Tripods.

[5] Johnny Hates Jazz: Shattered Dreams. Gary Davies next week. As is traditional for a live edition, the tape keeps rolling once the programme is over. “Thanks very much, we're off the air,” says Floor Manager Ian McLean, “I hope you've recorded it because otherwise you've missed it.”

We also get some pictures to go with the sound. A shot from the side of the main stage podium, with the audience filing out. “Would you please be very careful and take home bags, coats things like that, because they are very hard to find afterwards. Goodnight” The picture then cuts to a wider shot of the studio, with more crowds milling around. Westworld's Sonic Boom Boy starts playing through the studio, and watching the crowd disperse reminds me of the Prince song U Got The Look, and the line, “Closin' time, ugly lights, everybody's inspected.” The camera pans left and a man in jeans, white top, and glasses, steps down from the podium. He's wearing studio headphones. Could this be Ian McLean himself? He's not on screen for long because the camera abruptly looks down, as if it's not allowed to point at Ian for too long, The camera continues to pan and we get a look at the main stage, with the Housemartins' instruments still set up -because, of course, they couldn't take them down during a live show. The camera pans again, more shots of the crowd, and a guy in a blazer politely but firmly guiding the crowd towards the exit. “You can kill this now,” says someone, presumably the camera operator, and the picture goes black.
Performance of the week:  The Housemartins, Five Get Over Excited