Midsomer Murders- Beyond the Grave

Ghosts and history haunt this episode from 2000

There’s a lot going on in this episode and though enjoyable some of it is rather superfluous. Steeped in historical references dating back to the Civil war, Douglas Watkinson’s characterful story opens with nothing more serious than a vandalised painting. Called in to take a look Barnaby and Troy are accompanied by Cully’s actor boyfriend Nico from the episode `Death of a Hollow Man` who is shadowing Troy in preparation for a role.  These early episodes had more continuity – the solicitor Jocelyn is mentioned here again- but this aspect would soon be largely phased out. 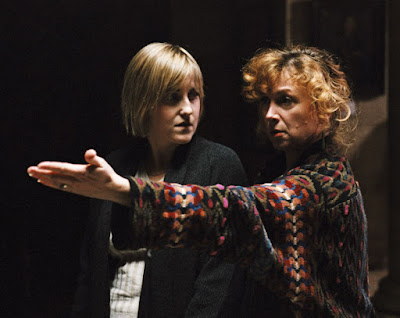 Nico’s presence offers an opportunity to comment on police methods but this just isn’t that sort of series though there is some fun to be had with the idea. Troy commenting that the actor will be getting paid more for playing a sergeant than he gets for actually doing the job is a good line but this plot sort of fizzles out. Instead Nico becomes a de facto second deputy for real and considering he’s a civilian Barnaby allows him access to a lot of police information and is not above putting him at risk either! Plus he does seems to have a knack for the job.

The pivotal painting is of a local historical figure who bears an uncanny resemblance to the late husband of Sandra McKillop who is all nerves and jitters as she struggles to overcome her loss. She is also starting to see ghostly goings on in the museum. A rocking chair rocks of its own accord, a bust of Shakespeare falls off a shelf and spooky winds blow. While the viewer also sees these things its initially unclear if they are in her mind or someone is trying to send her over the edge and, if the latter, then why?

Soon though it becomes clear that more earthly matters are at stake in particular a stash of money reputed to be buried under the museum floor and also a connection to a recently deceased criminal. There’s a lot of content but so much of the time is spent on the village’s quirky characters – who are of course a delight – that the plot seems to spill out quickly in the final half hour and could do with being a little clearer. One thing that puzzled me for example was the painting. Sandra says she never realised before that it looked like her late husband so was a new version substituted or is it because of the grief she now sees it?

The murders are typical of this early period and not as grandly choreographed matters they later became but nasty and brutal. Here someone is s bludgeoned into a tomb while another victim is found in the most macabre of circumstance. This contrast between the seemingly genteel and eccentric populance and their violent   acts was very much the foundation of the series’ success and this episode has plenty of lively characters. There’s Prunella Scales in battleaxe form as the formidable Eleanor Bunsall something of a medium whose intuition proves vital in one scene. 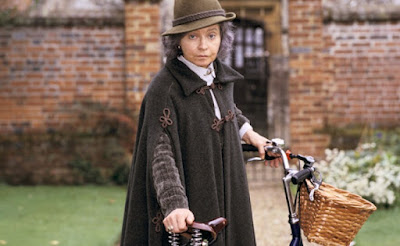 Malcolm Sinclair as Alan Bradford is always on the scene yet constantly amazed- I had him pegged as the antagonist early on thanks to the script’s careful placing of him. In a slightly under developed role as psychiatrist Linda Marquis is Sylvestra Le Touzel who plays her with just enough sugar coating for you to be suspicious of her as well! James Lawrenson is James Tate whose shady past gradually comes to light. There’s also a great supporting role for Roger Sloman as an outsider lurking about.

The episode has the expected lush scenery and super editing and I noticed how crisp the sound mix is as well- every time characters walked up and down a gravel path bot their footsteps and dialogue were perfectly combined.

The issue of someone trying to mentally control another person is suggested and you can see what the script is getting at but somehow this isn’t given enough time to work through. Also some of the explanations for the ghostly happenings don’t ring entirely true especially the crate that bursts into flames. How would anyone know the Sun would be shining that day and even so would it really be strong enough to ignite the whole thing and besides it doesn’t look very sunny on the day it happens. Perhaps to add a frisson of doubt about everything we’ve had explained to us the final shot is of that rocking chair moving seemingly under its own accord!