Midsomer Murders - Blood Will Out

Travellers and soldiers clash in this season two episode from 1999.

In any detective series the arrival of a group of travellers usually means everyone will assume they commit the crime only for it to be revealed that someone is trying to frame them. `Blood Will Out` does use this trope though luckily its only a part of wider picture. When Orville Tudway arrives in the village of Martyr Warren with a large number of travellers it triggers a number of simmering situations not least crystallising the hatred with which local sheriff and former soldier Hector Bridges causes amongst various parties. The scenario is complicated by an odd marriage swap and memories of the Falklands war in which both Bridges and Tudway served. So when Bridges is shot dead there are plenty of suspects. 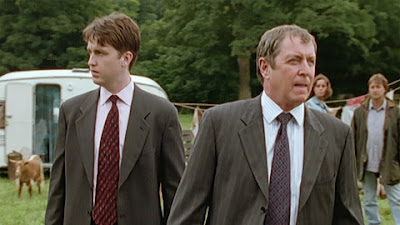 Barnaby and Troy looking for clues

The real appeal of this episode though is the way it has been constructed. Douglas Watkinson’s medium paced plot allows space for a number of interesting characters to emerge while director Moira Armstrong brings a very cinematic feel with her choice of shots. She takes us right into the heart of things especially during a thrillingly shot pony and cart race around the village. Often there can be a slightly stilted, placed feel about large public events in fictional series but this has the look of being filmed in real life. The script also diverges from the standard portrayal of travellers yet doesn’t completely exonerate them from dodgy goings on.

Watkinson also pens a surprisingly lively, witty Barnaby who tackles the case with considerable energy eliciting a hugely enjoyable performance from John Nettles. Barnaby trying to lose weight is well sewn into the overall narrative rather than tacked on for funnies and the interplay between Barnaby and Troy, the latter tasked by Joyce with making his boss stick to the prescribed diet is nicely played by both. In tracking the progress of the case the narrative is thorough enabling Barnaby to pick up on odd phraseology, people’s telling looks or simply judging their character. Barnaby is also willing to confront potential trouble to diffuse it using his wiles- in one scene he threatens to call in the armed response unit even though the area doesn’t have one! "Come on Dobbin, let's go and find that pirate ship..."

The dialogue is often quite witty too almost as if Douglas Watkinson realises what an odd scenario he is presenting and has more fun with it than some writers do. The episode shows up how more recent series have tended to make leaps that the viewer may not always understand whereas  earlier series often show us why Barnaby has reached his position because he is very good at this job. The murders themselves are a means to an end this being the period when they were rarely the showpieces they later became.

The guest cast are equally impressive with Kevin McNally as the shady Tudway whom you are never sure whether to trust or not while Paul Jesson relishes the pompous but also dangerous Bridges. Phyllida Law is the playful and flirtatious Felicity Dinsdale, Tricia George plays the somewhat merry widow Jenny and Jerome Willis bringing an earthy gravitas to the role of the senior traveller called John Smith. There’s a gag that all the travellers are called Smith by the way. The denouement is something you may not predict on first watch and proves to be the least likely aspect of an otherwise well -developed plot.