When Bernard Cribbins, who died today aged 93, published his autobiography in 2018 it was titled `Bernard Who? 75 Years of Doing Just about Everything` which encapsulates both his modesty and how his presence became a fixture for several generations of children and adults. Just looking at his IMDB entry reveals 121 different roles and that’s only tv and film. For some he was the man who made a record about digging a hole, for some the stationmaster Albert Perks in The Railway Children, for others the voice of The Wombles or the bird from the phone adverts. For others still he was Wilfrid Mott the first pensioner to become a Doctor Who companion or for younger viewers Old Jack. In these roles and many others he deployed a disarming warmth that meant you always liked and trusted him. His mantra, delightfully, was “do your best” and that seems like as good as tenet to live life by as there is. For me he sort of burst onto my radar all at once when he did The Wombles and was also in the 60s Doctor Who film Daleks Invasion Earth 2150AD which I saw during the summer holidays when they used to show them every year on our local cinema even though by then they were ten years old or something. The scene where his character pretends to be a Roboman always raises a smile. By the time I discovered him he’d already done such a lot. He'd had two hit singles in the sixties `Hole in the Ground` which reached number 9 in 1962 and in which he deploys both posh and working class accents perfectly. Noel Coward chose it as one of his selections for Desert Island Discs. `Right Said Fred` (after whom the 90s pop group were named) reached number 10.

One of my favourite Cribbins performances was his obstreperous guest in the Fawlty Towers episode `The Hotel Inspector`. He matches John Cleese’s classic hotelier with a portrayal of a irate guest pushed and pushed to his limit and beyond. Fawlty thinks the character is the hotel inspector so bows to his every fussy whim and both are superb as matters escalate till the revelation that in fact he sells spoons. Just the way Cribs says “spoons” is fun enough. 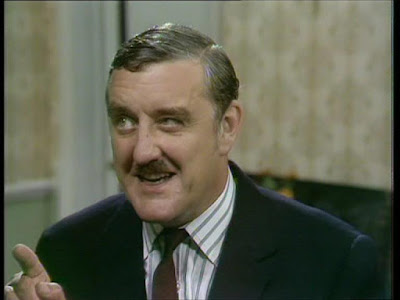 The Wombles was born out of something as ordinary as picking up litter yet it was Cribbins who breathed character into these creations – remarkably he voiced all of them giving each individual quirks and it’s impossible to see a photo of a Womble without thinking of his voice.  At the time I never imagined that it was the same actor speaking as them all.

His cv is packed with interesting diversions and he did so much you tend to forget. For example, he did more episodes of Jackanory than anyone else, his storytellers voice perfect for a variety of tales. In the late 60s he had his own tv show described as a “television revue” He also appeared in many theatre prodctions early and later in his career in productions including A Comedy of Errors, Run For Your Wife, Guys and Dolls and Anything Goes as well as a number of pantomimes. His best known film role was in The Railway Children of course but he also appeared in a range of movies including Frenzy, three Carry On films and She.

Unexpected late career visibility came about when he was cast as Wilfrid Mott in Doctor Who. His part grew in importance and I like to think it was because he was so effective on screen. Older characters in shows like this had always tended to be given tragic or static storylines but Wilf was out there with the younger character battling aliens (attacking a Dalek with a paint gun was the actor’s own idea!) yet also on hand to impart some grandfatherly wisdom. He was an especially good counterpoint to the energetic performance of David Tennant, every scene they had together gelled perfectly.

If I wanted to encapsulate his skill and appeal I’d single out a scene in the Doctor Who story `The End of Time`. This is a brash, enormous production full of fire and action yet in the middle of it there is a pause to allow Wilfrid a reflection on his past and how things are in the narrative as he rouses a downbeat Doctor. And it’s the moment you remember more than anything else which given the dramatic sequences in this story is saying something. His last job was back in the Doctor Who Universe just a couple of months ago. 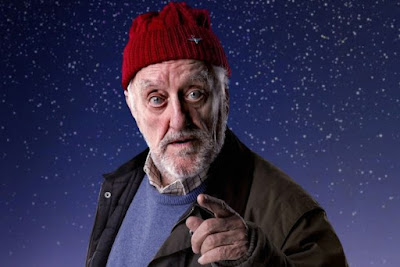 The warmth and affection evident in the thousands of tributes today from people who worked with or met him is testament to the fact that he was one of the good guys whose mixture of twinkly wisdom and energy meant he was by all accounts good company, always ready for fun. There’s a great clip that surfaced today which was filmed by Gary Warren during the making of The Railway Children that shows exactly how much fun he seems to have been during filming.  He was even still playing football in his eighties! The term National Treasure is too easily ascribed to anyone famous who reaches a great age but in this case Bernard Cribbins really was beloved by generations. Of course, if you’d asked him about it he’d have waved the very idea away proving of course he really was a national treasure. I imagine him now, up there, travelling the stars for real!