Midsomer Murders has been accused of becoming less bizarre over the years but it still has its moments and this 2014 episode opens up with someone being eaten by a wild boar.  I was kind of hoping for an army of wild boar to attack the town but I think that may be a different series! What transpires is that local farmer Martin Strickland’s demise is not particularly mourned by several women in his life and what ensues is wrangling over his estate, Wyvern House. This includes a restaurant, run with an iron spoon by chef Ruth Cameron a sort of female Gordon Ramsay. 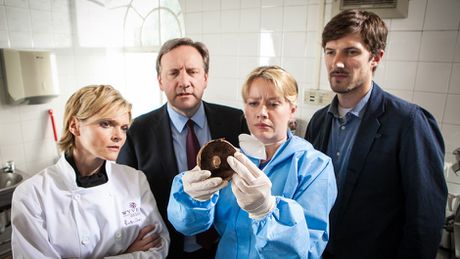 The chief suspect was the donut. Played with gusto by Sharon Small she is the kind of chef who shoots around the kitchen micro managing every dish and rarely offering praise.  I’d have imagined this never happens except I’ve seen it does on other programmes and the early part of the episode manages to reproduce the kitchen atmosphere fairly well. Mind you does any establishment have such a generously sized kitchen as this one?

As Renny Rye is behind the cameras this is one of those especially well directed episodes that takes advantage of it surroundings whether it’s the steel of the kitchen or the dark browns of the office and of course the picturesque woods. It’s also an episodes that manages to draw its plot over its ninety minutes to maximum effect. There are plenty of red herrings that lead us to supposed drugs, illegal auctions and Ruth’s latest recipe book allegedly taking ideas from one of her staff. The results of Stickland’s murder also provide much rivalry- a common theme used in a number of episodes- as first his daughter Amy inherits in an amusing  scene when his second wife is more than a little upset. Then along comes the second murder in which Amy herself is offed after quaffing some soup. I have to mention that Amy is a slightly oddly written character - her wry reaction to inheriting seems at odds to the hardworking member of the kitchen brigade. One minute she is somewhat haughtily proposing a business deal with the restaurant owner, the next diligently preparing food.

Like any good menu these elements gel together to make a satisfying meal especially as a lot of people might care to queue up to harm Ruth Cameron probably including some of the diners! The ending too is atypical in that rather than show the viewer what’s happened the script tricks both us and the main suspect as Barnaby tries the sort of deception more normally practised in urban police shows and it’s a satisfying change from the increasingly lengthy dialogue scenes that seemed to conclude some episodes around this time. 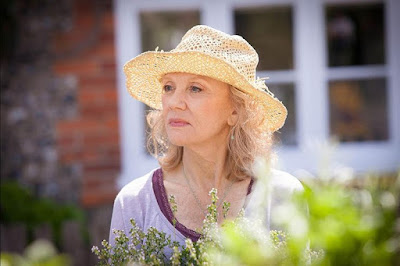 The cast are great with most of them making the most of heartily written roles allowing them to protest and shout at various developments. Yet there are also some masterly played relationships that surprise especially that between Johnny and his ex- wife Angela (played with subtlety by Arabella Weir) which remains cordial and realistic. There’s also Hayley mills whose character Lizzy Thornfield is still hurting from a car crash that killed her son twenty one years ago and which she blames Ruth for.

At this point Barnaby’s deputy is Gwilym Lee’s Nelson who is underrated in the pantheon of Midsomer assistants because his stay was relatively short. Nelson may lack humour but he makes up for this with a great chemistry with Neil Dudgeon’s Barnaby and it was a shame their partnership ended so soon. Neil Dudgeon incidentally seems to relish this episode gleefully picking up every suspicious moment.  The sub plot involving Mrs B undertaking decorating while on maternity adds a homely touch to balance out the coldness of some of the characters we’ve met. Just think- if this was Joyce Barnaby she’d probably have a part time job at the restaurant!