There are more villains than heroes in this excellent episode which is one of those which definitely would have benefited from being a two parter. As it is a lot of developments are nimbly squeezed into 23 minutes without a second of waste. Turpin and Swftnick steal a large sum of printed money from the Duke of Hertford though at first Swiftnick thinks it’s just paper! Needless to say the Duke is livid and calls in his henchman Tobias Moat to bring the county to heal. Moat has a reputation for ruthless cruelty and is accompanied by the sound of a whip every time he turns up. He also seems to have a set of black teeth for no other reason than to make him look even deadlier. Moat has history with both Turpin and Spiker having served with them – or by the sound of it more against them- in Gibraltar.

With Turpin away in London for much of the episode the stage is set for a villain-fest that is hugely enjoyable and well written. John Hallam plays Moat with a permanent scowl and, possibly because of those teeth, a threatening though tight lipped tone. Bernard Archard is the demanding Duke who has Moat clear the county of vagabonds aplenty. It does make you feel maybe a touch more sympathy with Sir John and especially Spiker who ends up sacked and on the run without his powdered wig. The scenes which all or some of the four inhabit are filled with extravagant performances yet they never undersell the menace that Moat brings. David Daker in particular had a lot of fun being enraged and desperate.

Director Dennis Abey manages to support the narrative with a great montage of Moat’s reign of terror plus he really gets up close in the fight sequences. There are a lot of possibilities with this episode and it just about manages to reach them all but had it been a two parter there is a natural break when Spiker is thrown out and Swifnick is captured and extra time would allow us more time with these interesting characters. In the end Turpin comes back and saves the day though it might have been interesting for Spiker himself to have done so. Packed with little period details and a willing cast `The Whipping Boy` is a melodramatic triumph! 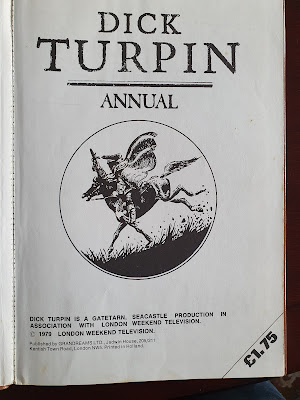 Something of a frolic this episode is built on the unlikely premise that Sir John is forcing Spiker to marry the eligible Phyllida Tranter so he can get his hands on her dowry. So while Spiker tries to smarten up, a somewhat hapless romantic called Nigel Ffoukes-Withers who is actually in love with Phyllida pretends to be Turpin whose exploits she admires. Turpin sets out to help him win her affection by pretending to be Spiker at his most obnoxious so Nigel can rescue her a plan which must have involved him telling all the regulars at the Inn. Its all going well only then the real Spiker shows up.

It’s a whisper away from outright comedy but plays so well into Richard O’Sullivan’s gift for mimicry. There’s some priceless dialogue well played by all including Julie Dawn Cole as Phyllida and Kevin Brennan as her blowhard father. While the stakes are low key compared to recent episodes it is tons of fun with every line that Richard Carpenter penned zipping off the screen. 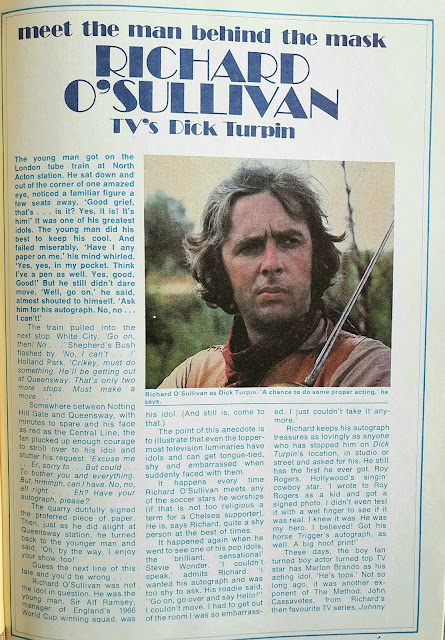 Though first shown after `The Turncoat`, this episode was meant to be watched first apparently. In an attempt to prove he can do things without Turpin, Swiftnick rescues two children being held by Sir John Glutton. Christopher Benjamin is at his bellicose best here, as Glutton bullies the kids and then leads the chase when they go missing. Michael Deeks plays well into a more heroic role while retaining his character’s relative naivete. There’s an early role for Linda Robson as a good hearted maid who works for Glutton but helps Swiftnick.

Not that Sir John seems to notice much that goes on in his own place, he virtually walks past the two of them sort of hiding behind a banister and would clearly have seen them in real life. The kids mother is accidentally knocked off her horse returning from London with a deed to pass over her late husband’s land to Glutton and she is helped by Turpin. This side of the tale is a bit hit and miss with there not being enough time in the episode for it to develop. I expected some sort of twist but it’s a fairly standard rescue goes wrong but our hero saves the day at the last moment thing. James Allen directs with his usual cinematic standard especially during a sequence involving a river though no director in the world could probably hide the fact that the hunting dogs look more soppy than fierce and would probably rather be curled up warm somewhere else!

I imagine Richard Carpenter particularly enjoyed penning this excellent episode which plays into real historical situations and makes good use of all the regulars. Spiker is entrusted with a letter by Sir John that is to be delivered at a secret rendezvous. However he is robbed on the way and soon a squad of soldiers are searching for the same letter which implicates Sir John as a supporter of “the young pretender” Prince Charles to the point of offering Rookham Hall as a refuge. For such a statement Glutton is liable for execution. Glutton reacts by imprisoning Big Nell and Davy the couple who run the Cock and Bull Inn as a ruse to force Turpin to help retrieve the letter.
One suspects the cast had an especially great time making this one too as they all get plenty to do though perhaps David Daker didn’t enjoy being left lying in mud! Stephen Greif guests as the charming Germanic Major Gerdhart who is as efficient as you’d expect and the actor has fun with it. The only character who doesn’t get much of a look in is Julia Hawthorne, the emissary the letter was to go to though she does get kissed both by Gerdhart and Turpin. I suppose you have to cringe a little a that though you do have Big Nell taking on two of Glutton’s servants with an oak table so women are not completely helpless here!

What really appeals about the episode is the way Carpenter writes the scenario with Gerdhart quite willing to concede at the end while Turpin’s willingness to work for Sir John doesn’t mean he turns on the duo who took the letter in the first place. Carpenter doesn’t have Turpin declare which side of the regal issue he sides with; in fact Dick seems to deplore any self appointed person “in a fancy hat”. There is one little thing though; Spiker’s nasty beating and exposure seem to initially leave him with some sort of fever but this disappears quickly even though he is still tied up and wearing very few clothes in a cold barn.

The climax is an inventively shot fencing duel in a confined courtyard in which director Gerry Poulson frequently places the camera above the action. Plus the episode ends with Swiftnick kissing a horse! 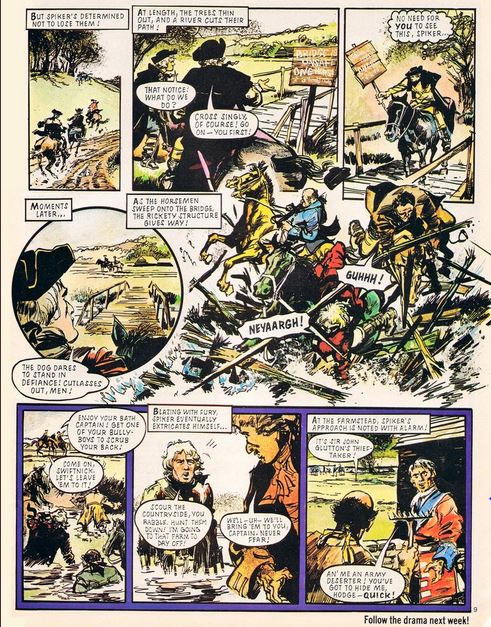 When Swiftnick impetuously strikes out on his own again he ends up getting both himself and Dick captured by soldiers. The real surprise is that also being held are Sir John and Spiker. This unlikely quartet find themselves sharing a cell in a talky episode that really shows us each character. It’s the sort of thing Richard Carpenter excels in bringing out little traits and behaviours while ensuring that both Glutton and Spiker are never to be entirely trusted.

As a season finale it brings together material from earlier including Glutton’s support for Prince Charles, the uneasy rivalry between Turpin and Spiker, Swiftnick’s impatience and even old Isaac Rag. Once again Alfie Bass threatens to steal the show and Carpenter writes him superb lines. Rag can be a sympathetic character one moment – he sparkles with delight that Swiftnick remembers his name - and a wily negotiator the next. There’s also a comic turn from  Bryan Pringle as the jailer whose loyalties shift almost every scene.  In a nod to contemporary celebrity he even asks Turpin for an autograph at one point! “Its not for me,” he insists, “It’s for the wife”. The episode also seem intent on underlining Turpin is an unconventional hero and the parent / child relationship he has with Swiftnick. Both Richard O’Sullivan and Michael Deeks are excellent again in this episode.

At times matters have the air of a stage play confined inside the cell for much of the episode.
To enable the four to ultimately escape it does mean that the dragoons guarding them seem to be very sleepy. No sooner have they quelled an attempted breakout than they’ve nodded off again!

Escape the four must of course and I love the fact that the key to the cell has been within their grasp the whole time but they didn’t know it allowing for a chaotically fun exit compete with Glutton covering his head with a shawl. The camera catches Christopher Benjamin’s expression as he navigates his way around the duelling and it’s a picture.

The episode even ends on a sort of cliffhanger as we don’t know what will happen to Glutton whose financial support for Prince Charles will still be known to the authorities. Meanwhile Turpin and Swifnick toss a coin to see which direction they will head for but we are left with a freeze frame and we don’t find out.

Coming soon – Back on your nags for reviews of Season Two!!