You may have seen e-scooters in your town or city. After a mixed reaction to hire bikes which require the effort of pedalling, e-scooters have proved more popular as they zoom along under their own power. The only effort they require from the rider is a sense of balance. You can ride e-scooters either on the road or the pavement avoiding traffic lights and busy junctions. They can be charged and do not emit the sort of air pollution that a motorbike would plus they are easier to park than bikes. There are seemingly no restrictions as to where they can be left- I’ve seen them parked in all sorts of places. It can only be a matter of time before someone creates a phot of one parked on the Moon! Inevitably there have been complaints about e-scooters being a public nuisance- but not for the reason you might think..

E -scooters’ popularity is largely due to their ease of use. There is an app to download to your phone to help you locate one, then you tap the Ride button in the app and the QR code. To start the scooter you step on, kick forward then push the throttle button down. You have to be aged over sixteen to ride one but you don’t need any sort of driving licence or permit, however for ones rented by a local council there may be limitations they have set. The scooters use electricity and the charge needs to be above 30% to go anywhere more than round the immediate area. A full battery takes you as far as ten miles distance and they have a top speed of 30kmph, just over 18 miles per hour.

At the moment the government is trialling e- scooters in forty cities across the UK with the schemes run by local councils. If the Liverpool scheme is anything to go by the trial is a big success in terms of actual usage. However, when it comes to the central aim of reducing traffic I’m not so sure. Most of the people riding them seem to be teenagers many of whom would not otherwise be driving a car. Also you couldn’t really commute to work on them unless you don’t need to take anything with you. Unlike a pedal bike, there is really nowhere to store anything. The scooters being used in the UK trial are made by a Swedish company called Voi Technology which was founded in Stockholm in August 2018 with the help of a number of prominent `angel` investors. They describe the scooters as “a clean, efficient, cost effective and zero emission” alternative to cars and taxis.

Electric scooters are not a new idea at all; in fact the first one was invented way, way back in 1817! Brilliantly called the Velocipede it was the brainchild of a German inventor Baron Karl von Drais de Sauerbrun. The first mass produced motorised scooter was the Autoped launched in 1915 and this was more or less an engine mounted over the wheel of a children’s scooter. It was described as “unsteady” if exceeding twenty miles per hour. Aimed at the rich it was, unusually for the time, advertised by a woman dubbed the “Autoped Girl” pictured zooming along while dressed up to the nines for a garden party. Its popularity was helped when renowned aviator Amelia Earhart was pictured on an Autoped. The vehicles were marketed with the suggestion, “In the future, we are told, no one will walk at all” and even the New York postal service tried using them. Yet they remained a niche product. Now there is a suggestion that electric scooters could be a viable tool in the fight against global warming and climate change. 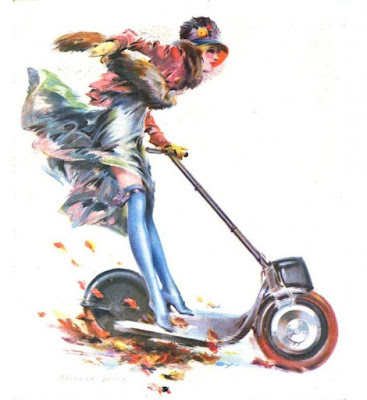 Autoped Girl- come on, there's got to be a tv series about her saving the world every week!

Are  e-scooters safe? They do seem to be as good as bikes in swerving away from traffic jams. In the United States last year it was reported that most accidents involving electric scooters involved ground obstacles like manhole covers, curbs or uneven surfaces. Also, in the US e-scooters are allowed to travel faster- up to 55kmph. At the end of last year, a report by a consumer organisation in Europe into electric scooters highlighted their relative unsuitability in wet weather listing both battery failure and braking issues in such conditions. American reports have also highlighted a high rate of head and neck injuries. It is noticeable that no helmet is even recommended when riding them never mind being made compulsory. This leaves the rider far more at risk in the event of an accident than if they were riding a bike plus in cold or wet weather you are even more exposed to the elements than on a bike.  On the other hand, you are less likely to travel long distances on major roads on an electric scooter. They are really designed for shorter journeys.

One of the more unusual news stories last week was that e- scooters will now make a humming noise in a trial in three cities. Despite one of the advantages of the vehicles being their near silence it seems this has caused unforeseen issues with pedestrians in Birmingham claiming e- scooters are “out of control”.  They are so silent that elderly, hard of hearing or partially sighted people have been caught unawares as one glides past causing shock and potential injury. They do have a bell but this is seemingly not loud enough for many people to hear. This doesn’t quite fit in with Voi’s slogan “Say Hi to Voi’s, Bye to Noise` though and after decades of noise pollution complaints about vehicles certainly takes a different route. 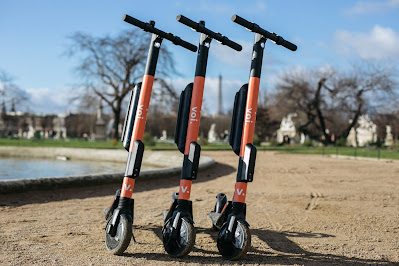