Appearances can be deceptive in this fun episode which opens with Turpin and Swiftnick’s latest coach having already been robbed. Seems there’s a poacher about and suspicion soon falls on a mysterious newcomer Joshua Vizard who certainly looks like he could be a highwayman with a dark demeanour that suggests villainy. On the other hand Sir John’s visiting cousin Willoughby is a powdered ponce fond of quoting poetry and sporting the latest fashionable wig from London. He couldn’t possibly be the poacher could he? Richard Carpenter’s script creates a pantomimesque atmosphere filled with word play and somewhat exaggerated performances from the cast. This is Carpenter in his element jousting with language and the proceedings play well for all ages- kids will enjoy the action and the silly accents, older viewers will appreciate the allusions and the neat twist of the plot. Perhaps the final five minutes which becomes a sort of hide and seek in Glutton’s manor is a touch too overplayed but by then you’re with it all the way. 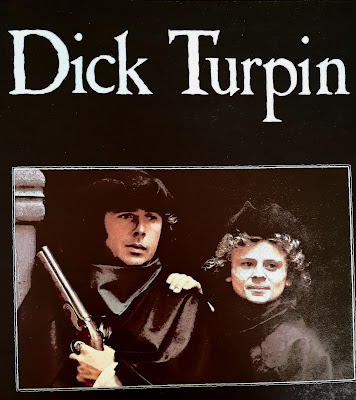 James Allen directs to give a sense of space with some fabulous wide shots of coaches and riders while the action scenes, especially those in the house at the end, are tightly presented. Guesting Rupert Frazer is a lot of fun as Willoughby and I like the fact that even when his true intent and skills are revealed he remains as foppish as ever even when engaged in a fencing duel. Michael O’Hagan glowers and mutters as Vizard while Richard O’Sullivan has a ball with more disguises, something that is becoming a series trait. And watch Christopher Benjamin’s Glutton being more concerned with his pictures getting damaged during the fighting as he hides behind the women! Some may find the whole thing too arch but it really is a little gem with so much packed into twenty-three minutes.

03/02/79 W Richard Carpenter / D James Allen
“Of all the artful, scheming, cunning…captivating little charmers. Just wait till I catch her.”

If the previous episode sold us an unlikely highwayman, `The Pursuit` pulls the same trick albeit with a girl turning out to be the thief who takes all of Turpin’s recent gains. The episode lives up to its title which refers both to the lengthy chase sequences and also the fact that Turpin is rather smitten by Belinda who resides with her mother and sister in a well appointed country house. Matters don’t go quite the way you expect with Turpin constantly outplayed by the wily Belinda, at least until her cousin tricks her.

Stacy Dorning plays the role with a light touch while her real life sister and mother play Abigail and their fictional mother too. It’s a jokey episode which James Allen shoots with emphasis on reaction shots at which the cast excel. We also learn that Turpin can turn his hand to the piano if needed. Outside there are some dynamically staged chases on horseback on what was clearly a very warm day filming.

In the end Carpenter’s preference for double crossing rather overwhelms the episode with a late addition of some Americans cramming just a bit too much so a handy collapsing jetty solves a problem just in time. 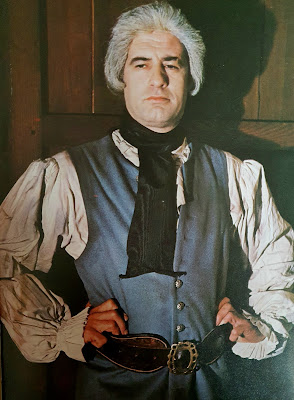 The best episode yet shows how the series works even better with slightly less hysterical performances. When blacksmith Sam Morgan who is also looking after Turpin’s horde is arrested by Spiker, a plan to spring him from jail ends up rescuing a man of the road and as it tuns out opportunist called Isaac Rag. Played with seedy charm by Alfie Bass, Isaac proves a crucial character in the story as liable to help Turpin as he is to also pilfer from him. He calls Turpin “Captain” and Swiftnick “young spark” and I hope he’s back
As the scenario develops Sir John finds himself as the guest of Turpin allowing Christopher Benjamin to scowl magnificently though Glutton also makes sure he helps himself to plenty of wine. Thus far the clashes between these recurring antagonists and Turpin have had a speedy quality that allowed for only a lot of shouting and cajoling. This is better staged as the story demonstrates just how much everyone tries to get the upper hand.

David Daker gives Spiker the demeanour of a put upon child at times as nothing goes quite right for him this week! It’s a great episode too for both Richard O’Sullivan and Michael Deeks who have really gelled in these roles and are great at interpreting Richard Carpenter’s lively dialogue. It would be so easy to make them darker characters (as I suspect a Dick Turpin series made these days would) but this series and its two leads have such a light touch it does must of the heavy lifting and keeps the audience on side.
This episode also highlights the tiny detail that Carpenter puts into his scripts like the reference to the circular horse shoes. There’s also a stand out sequence involves a fight that makes inventive use of a smithy utilising almost everything that’s around to incapacitate or trip someone. This gymnastic confrontation is a perfect advert for the skill that goes into the fight scenes which could easily look too staged. In consideration of the family audience nobody is killed yet each of Spiker’s men are put out of the picture with ingenuity and imagination.

Things turn more serious when Spiker’s plan to discredit Turpin by hiring an imposter to carry out nasty deeds gains traction even to the point of convincing Swiftnick that Dick has gone rogue and he ends up shooting him. Yet a wily Isaac Rag helps the injured Turpin for reasons that are not entirely clear. For an elderly gent he also seems very lively and well travelled but it’s worth it because Alfie Bass’ performance is gold once again. Isaac is the sort of character at which Richard Carpenter excels so you can forgive his use as something of a plot device in this episode.

It’s a slightly unlikely tale well handled by all especially Michael Deeks whose shock at what he sees as a betrayal is put across very well by the actor who gets a strong speech. You really feel the sense of shock and their later reunion is sweet. For a story that hinges on appearances though you can’t help but be amused when Turpin and Swiftnick turn up for a fair at which the fake outlaw is due to appear dressed as farmers looking like The Two Ronnies! With a lengthy time period and a somewhat speedy recovery from Turpin this is an example of why this series needed longer episodes. 23 minutes is not quite enough to convincingly work through the storyline in but watch `The Imposter` for excellent performances from Alfie Bass and Michael Deeks as well as the novelty of Sir John actually going outside and not eating! 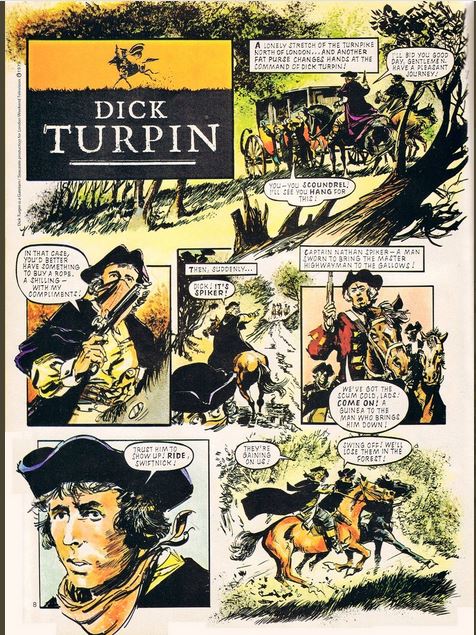 24/02/79 W Richard Carpenter / D Charles Crichton
“You’ve got a squealer in the brotherhood- why don’t you admit it.”

The great thing about Richard Carpenter’s series was the sense of authenticity he brought into the plots even if they may not always be 100% accurate. This episode - complete with an odd table lifting contest - shows us a brotherhood of rogues ruled over by the so called Upright Man. Tyson Sarney as he is slightly amusingly named is played with a gallon of pirate-like relish by Ray McAnnally and the viewer is let in early on the fact that he is betraying other members to the ambitious Lieutenant Price. Those captured are subsequently hung while he and Price share the reward.

Dick Turpin comes to see the widow of the latest victim only to find he’s been hounded out of the pub they ran by Tyson’s gang. Cue much ribaldry and ale as an already suspicious Turpin joins the brotherhood to expose the “squealer”. He suspects the unpleasantly dour Harry Bassett (Tony Haygarth snarling as only he knows how!) but when Dick himself is tricked he finds out who is responsible and turns the tables in style.
It’s an episode that really takes us deep into this time and also shows how clever Turpin can be. Richard O’Sullivan’s measured performance contrasts well with the loutish behaviour of the brotherhood as he watches and takes the measure of everyone. There is a moment near the end when it looks like the brotherhood will turn on Tyson in a shocking way but even though that doesn’t happen this is an episode that shows the grim life some of these people were living. It shows how clever Carpenter was at being reasonably accurate yet also framing a good story as well. 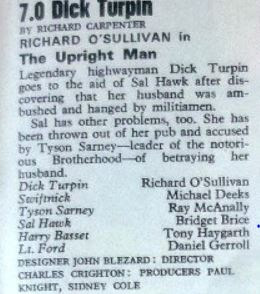