Words don’t come easy according to Eighties singer FR David but he was wrong was FR. There are in fact as many as a thousand new words or phrases added to dictionaries every year as language evolves and develops endlessly. If you were a social influencer you could probably popularise a word so much it would be added to dictionaries. So how does this happen, who are the keepers of the Dictionary (I’m imagining characters in purple robes in an underground cavern chanting each new word) and what are the very, very latest up to date new words? 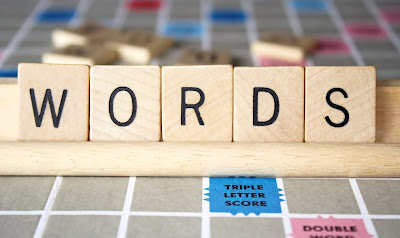 Naturally the pandemic continues to give us a lexicon of its own with `long hauler` the latest addition to an ever growing list of which `social distancing` is probably the most widely used. Last year such phrases  as self isolate`, ``WFH` and `contactless` were added. Amongst 2021’s newest are `makerspace` (a communal public workshop), `hard pass` (a firm rejection of an offer), `flex informal` (an act of showing off) and `hygge` (a state of contentment and comfort). Sometimes these new phrases or words seem to lag behind everyday usage for example `me-too `has only just been added to the Oxford English Dictionary this year as has `essential worker`. In truth there is no cavern full of high priests of words (go on, you’re surprised) instead the criteria is that the words or phrases first have to be in everyday usage for some time. However much a small group of people might decide to use a made up word like Squench for something, unless hundreds of thousands do so and it sticks the word will never see a dictionary. Dictionary editors study what language is in everyday usage and in what context.

Some of 2020's new additions to directories included `A -game`, `influencer`, `sadfishing` and `ath-leisure` as well of course as `social distancing`. 2019 newbies included `mic drop`, `fake news` and unfeasible but true `Jedi`. Most of these new words or phrases are combinations of existing words or else giving new meaning to words we already know.

The Oxford English Dictionary has four major updates per year and its editors consider thousands of suggestions leaving some on a watch list for future years while ones which could be included are given an editor.  Being the editor of one word or phrase sounds simple but in fact takes a thorough investigation across every possible information channel using researchers to find everything they can. The entry will  need to include pronunciation, forms, etymology, definition, example quotations, and any  associated phrases.  It is a thorough process and perhaps that’s what FR David was getting at. These editors may choose to wear purple robes and chant but that is coincidental and they cannot shoehorn words in that nobody is using.

Does it matter though? People will surely say what they like regardless of whether a dictionary publishes it so in that respect dictionaries are following trends rather than setting them. Also they rarely credit the real inventor of the word  because their name is unlikely to be known so there are probably people seething about the fact that they created a word now in popular use but nobody knows it. You could invent a word for that.

What about the other side of the coin? Words that were once in common use but now nobody really says. Like “by jove” for example which ended up only ever being said by Ken Dodd. Looking at some words removed form most (though not all) dictionaries last year we find the likes of  `aerodrome`, `chararbanc` and `vitamin g` (which I’d never heard of in the first place) Most surprisingly some dictionaries have lately removed `aisle` even though supermarkets have them and `bishop` despite the fact there are loads of bishops about. If you check back there are some very nostalgic things that have long since been removed  including `millennium bug`, `vhs`, `cassette player` and `video jockey (or VJ).

The first English dictionary was Robert Cawdrey's Table Alphabetical published in 1604. It lists approximately 3,000 words, defining each one with a simple and brief description and there is a copy of the fourth edition from 1617 available to view online in which the first word is `abandon` and the third word is `abba`. This is said to mean father rather than Swedish pop group of the 1970s. The page also includes `abdicate` and `aberration`. As you scroll through it the words are often familiar, `barnacle`, `barbarian` for example but then you get completely unfamiliar words such as ` extirpate` which means `to pull up by the roots`  or `luted` which meant `made with clay. There are long abandoned words like `exult` or `felicitie` or `halcyon`. Perhaps one day they will come back into useage? In the meantime shall I try and invent a new word now? Erm....