If I’d seen this film a year ago, I might have freaked out! Remember that time when there was enormous uncertainty about the nature and scope of the Covid pandemic and nobody knew quite what to expect? That it could even be the end of the world..? It is that unsettling unknown that is evoked in this lively and frequently thrilling adaptation of Scott K Andrews’ book.  Writer and and also director Oliver Milburn homes in on the fear and chaos that could easily have become reality in 2020 though this film was made back in 2019 when no-one had heard of Covid. Thankfully such prescience only adds to the sense of tension running through this movie which explodes in a series of incidents.

The film is based on the first book of the Afterblight Chronicles, whose protagonist Lee Keegan is a disruptive teenager at posh St Mark's public school and in the opening few minutes he is expelled while somehow his accomplice, known as Mac, appears to get away with it. This friendship of opposites will become a key driver in the ensuing narrative. On the way back home Lee’s father is more interested in disturbing radio reports of some sort of pandemic with now familiar sounding debates about whether borders should be closed. At this moment it seems like the film will unfurl into some sort of epic global tale yet instead it becomes a far more satisfying microcosm of the worldwide scenario.

Courtesy of a very effective jump the narrative shifts by just three weeks and we see Lee taking the garbage into the drive and barely noticing a body lying in the road. This is excellent shorthand for a new normal which is thankfully considerably more extreme than it was in real life. What follows is a visceral journey with echoes of  Lord of the Flies and also the more recent Slaughterhouse Rulez which had a similar setting albeit with zombies. The latter provided a fantastical element however here we just have desperate people making bad decisions under pressure which being more likely is also more unsettling. The virus depicted kills all except those with a certain blood type giving it a randomness even scarier than Covid (face masks and social distancing are irrelevant) and meaning having lost his dad to the illness Lee treks back to the school where a group of pupils, a teacher and a nurse are hiding out.

This film is superbly directed with Oliver Milburn using both deserted locations and close up shots of victims to emphasise the dangers. The narrative has the group making best use of what is lying around while the large school building (in real life Eltham College) is utilised to its full potential. Built in the mid- 1880s it has all the requisite nooks, crannies, bleak rooms and unpleasant cellars the production requires plus it looks a bit like a fortress.  A budget led decision to shoot the action sequences always from one character’s perspective pays huge dividends pulling us into some violently staged close quarters struggles that feel real rather than choreographed. The hectic pace is underscored by doom laden percussion and a sparse soundtrack. Towards the end you really will be edging to the end of your seat, I was! 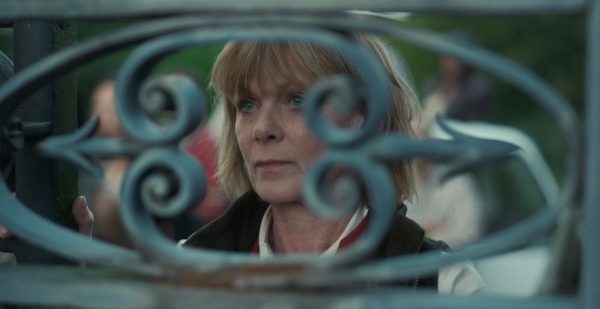 The story has something to say about the way people respond to crises with a suggestion that the more desperate things get the more extreme actions people are prepared to countenance. This develops when a couple of self -styled vigilantes burst into the school looking for people they allege have stolen something which after all the violence that follows turns out to be nothing more than a tin of beans.  It’s an indication of how society has already collapsed into a struggle for survival. The results of this incident have serious repercussions for the rest of the film as the school ends up under siege from the heavily armed parish council (!) who have taken charge.

While I would challenge the publicity suggesting this a comedy- horror something the flippant title also tilts towards- there are definitely some lighter moments which are never forced for laughs. This seems in keeping with the gallows humour which is always a feature of dark times.  However the final section becomes grim and shocking once it is clear that those you expect to survive may not and vice versa.

Lee, played by Oscar Kennedy makes for a satisfyingly different lead – the character’s unwillingness to take direct action becomes a crucial factor and unusually for this type of movie he is less willing to join in the carnage trying some diplomacy to unlock the situation. I think this is considerably more realistic than the stereotypical quiet boy who becomes the hero and Kennedy’s expressive face really does convey the different pressures so well even if the script sometimes doesn’t give him enough to say. As Mac, Liam Lau Fernandez proves willing to go all the way into madness in a role that could become unsympathetic where it not for the actor’s ability to retain something of the joker we see at the start. You keep thinking- maybe he won’t go that far. Then he does! Having an unstable, unpredictable character like this generates enormous tension as the film progresses. 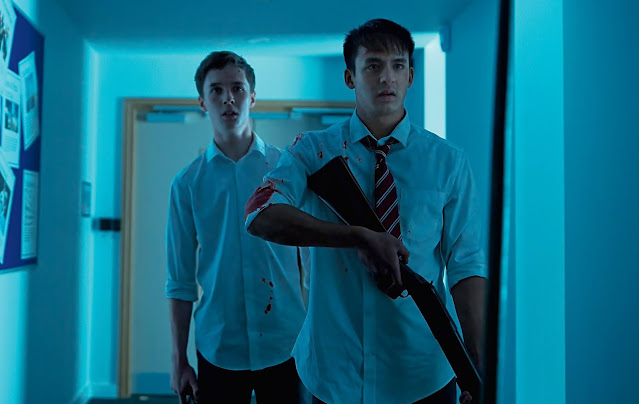 Jasmine Blackborow as the very young matron provides another different take on the expected as she struggles at first to deal with developments but gradually develops.  Samantha Bond appears to be enjoying her role as Georgina Baker whose personal stake in the outcome of the stand off is well conveyed both by the actor and script. Georgina directs the militia yet there are tiny moments when she seems like she’s uncertain of what she has started or unsure if she can control her army. Meanwhile Alex MacQueen (who was also in Slaughterhouse Rulez) suffers for his art as teacher Mr Bates‘ authority is gradually usurped by Mac’s preference for rabble rousing radical solutions. Though initially playing the sort of role he’s been seen in before (slightly comedic and struggling to maintain control) both the script and the actor develop the part into different territory later on. There's even a cameo role for Anthony Head as the school's stuffy headmaster. Perhaps a little extra background for the other pupils may have benefitted the latter scenes but they are sketched well enough for us to get a sense of who they are.

The ending leaves potential for a sequel though you suspect that a story like this could only get wider and less involving or else repeat the scenario in a different location. This is a terrifically terrifying rollercoaster that is far better at conveying the panic and desperation of a worldwide catastrophe than many a mega budget movie I’ve seen. Rooted in the everyday and focussing on our reaction to events it also has a relevance that really connects right now if only because we can be relieved our current pandemic didn’t end up like this!