Midsomer Murders- Dance with the Dead

This episode seems to turn up a lot on repeat channels and is well worth a look or even another look if you’ve seen it. By 2006 Midsomer Murders had reached its tenth series, an achievement only a handful of non -soap dramas ever get to mark but was it still as bizarre as it had started out? This series started with a typical PJ Hammond mystery centred around the charms of a wayward girl in a story that mixes wartime nostalgia with modern day concerns and throws in some ballroom dancing as well. Hammond’s characters this time round are a strange lot but all are in different ways dancing to the tune set by Laura who we only see fleetingly at the start in a midnight liaison with a local boy Simon Bright. Next morning his body is found in a fuel filled vintage car at a disused airfield. Though this is initially believed to be suicide it soon becomes apparent it is not.

We learn about Laura through others- the publican at whose bar she works who knows she’s been stealing from the till but hasn’t got round to sacking her, her other employer at a kennels who seem to accepts her tardy approach to the job, her landlady who is owed rent and the post office manager who doesn’t report she collects unemployment benefit despite the fact he knows she has two jobs. Now she’s missing these secrets emerge. The title could refer to the way the missing girl danced her way through a number of lives and it is those people’s subsequent feelings and guilt that the narrative plays on. Naturally there is a prurient streak to some of this interest as well.

Hammond does a strong job teasing the different ways Laura affected people’s lives while adding additional colour via a dance school, bowls club and  an elderly woman who leaves neatly folded clothes at the airfield each night in the hope her nephew (missing since the war) will come back. This element of the plot doesn’t quite hang together as well as the others if only because she looks too young to have been a teenager in the war and who leaves clothes outside an airfield anyway?

Its one of those episodes where watching for the first time you’ll be changing your mind about who the killer is and why they are doing it every ten minutes. The cast make a memorable impression notably Derek Hutchison’s clingy post master Richard Budd, Felicity Dean as the frustrated Frances Kirby and Nicola Redmond as the hard edged Marissa Clark. At times you feel there is almost too much content so someone like Danny Webb, as a sleazy former airman and Harriet Thorpe as strident dance teacher Harriet Trim don’t get as much plot or screen time as they probably deserve. One of the best performances is also the most understated. As Simon’s father Ifan Huw Dafydd gives a restrained show as a parent battling with grief and a desire to find the truth. John Nettles also seems to be having a good time in one of his later episodes as Barnaby shows us his dance moves while Jason Hughes has by this stage mastered the mix of bafflement and conviction he brought to the part of Jones. Oddly he comments on how odd the villagers are but surely he meets odd people every week! 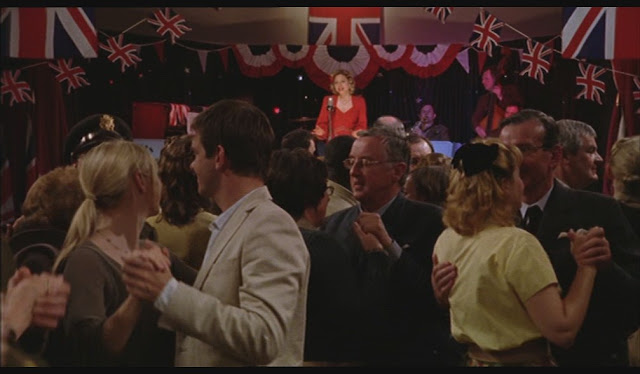 There are some strong visual and aural touches to give the episode its own identity. The musical soundtrack fades in wartime songs while the sound mix seems to pick up every footstep, car tyre and opening door. The night time shooting around the old airfield is atmospheric and there is a moment when footage of second world war planes is inserted into a scene for no other reason than to add atmosphere.

Often episodes from this era enjoyed a lengthy sequence at some sort of outdoor fete or event or even in one episode a pagan ritual. Here there is something different- a extended sequence set in a wartime dance at the church hall that allows a number of characters to interact.  You even get to see everyone do the Hokey Cokey! With most in period costume director Peter Smith goes one step further and has the picture turn to monochrome during one dance. Throughout the story he offers a well crafted realisation of Hammond’s script that brings together an episode that hops from one locale to another very frequently.

The mystery of what did happen to Laura is taken to the wire though we do find out at the very end. The one thing that remains unanswered though is how she had so much time to pander to her many male and female admirers as well as hold down two jobs!