Anyone who has watched the evolution of our national game should not be too surprised at the latest development. Our so called Big Six clubs are joining a European Super League (ESL) to play the cream of the continent’s teams in mid-week matches. As well as appointing themselves to this elite they have declared somewhat unilaterally that they will continue to participate in existing domestic and national competition. The move has resulted in a barrage of criticism from fans, senior figures, celebrities and politicians suggesting that, despite its distinctly pro-European approach, this is nothing less than Football’s Brexit. The idea has been swirling around for years though and simply confirms what even the most ardent supporter really knew- that those who run big football clubs are more interested in money than sport. 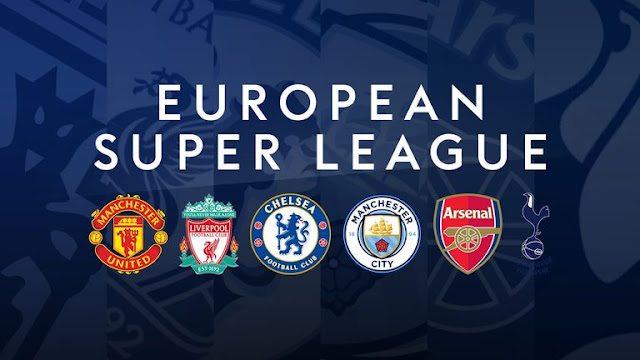 Our football league long since ceased to be `local` with the Premier League teams becoming businesses no different from Microsoft or John Lewis. Much gets more as they hoovered up the best players and poured out merchandise to maintain their hegemony. Now it seems they are bored of the `little` clubs they have to play each year so fancy a tilt at Europe’s other big fish on a guaranteed regular basis without the hassle of having to qualify for the privilege. These Big Six know they may not always be the Big Six in the Premier League and are trying to alter the natural ebb and flow of football to ensure they remain part of an elite regardless of how good they really are. The ESL is designed to keep them in the money; earlier today for example Juventus’ share price rose by 10% simply on the announcement.

This is boardroom stuff though; managers and players have already been complaining in recent years of an overcrowded fixture list so adding all these extra matches is going to support them how? Fans have been complaining of the rising prices of tickets – or having to pay extra above subscriptions to watch them live on tv- so now are being asked to fork out additional cash to travel over to Europe mid - week. Well those that don’t have jobs but can still afford to go that is. The ESL’s statements suggest that the cash generated by this development will find its way to all levels of the game but that is easy to say and in the past this kind of promise has been much harder to realise than to promise, for example after the 2012 Olympics.

The condemnation has been vicious boarding on aggressive with suggestions that the Big Six be expelled from the Premier League. It sounds unlikely that would happen as it would devalue the league itself and it would almost be trading under a false name. The Football Association has said they will not recognise the breakaway ESL raising the possibility that they will schedule games mid- week and these Big Six may have to field two teams on two locations on the same night! Another suggestion is that local councils could refuse permission for the teams to use the city or area name so Manchester United for example would not be able to play in the Premier League under that name.

Meanwhile the perpetrators of the ESL are blaming the pandemic though it is difficult to see how it has “accelerated the instability in the existing European football economic model" as they put it. It’s not like physical shops whose decline has been accelerated by the pandemic, football clubs were raking in plenty of money pre Covid. Like everything else this model will recover in time, it certainly has more money to play with than most businesses have. And if they really wanted to restore the stability maybe they could think about making the game more accessible and more local, of spreading the resources down rather than keeping it for themselves?

They also seem to be suggesting that there is public demand for this move yet with little actual proof; trending strongly on Twitter today has been #ripfootball. The president of UEFA has referred to the teams involved as “the dirty dozen.” Supporters groups of each of the Six and the other European clubs involved have condemned the move as well. One of Liverpool’s groups Spirit of Shankly said “Football is ours, not theirs, our football club is ours not theirs.”  A banner has been placed on the Anfield Stadium fence saying Liverpool RIP. People in the game and supporters seem to be mostly against the move. There is even talk locally that Liverpool’s manager Jurgen Klopp, who has already stated his opposition to the ESL- may resign over the situation- and possibly other current managers may also do the same. Such a strong reaction does not look like public demand to me.

The scenario could be an early example of how post pandemic the big beasts across all industries and culture will attempt to recoup lost revenue by resetting the landscape in their favour. In the end it will result in fewer people earning more money. We have thus far tended to view the pandemic as something that affects us all adversely. Yet you can guarantee that there will always be people who will seek to make personal gain from something like this. Even if you’re not bothered about the European Super League sooner or later something you are bothered about may find itself in a similar situation.  Doesn’t look like “We’re all in this together” is a phrase we’ll be hearing much longer.