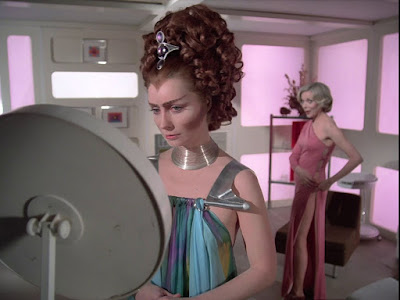 The key thing Helena discovers (after being warned by one of the robots not to do what the Vegans want) is that in fact the robots are the real Vegans who disguise themselves as robots and, er, the other Vegans- who are telepathically linked somehow- are robots who want to kill them but can’t because they don’t have any emotions. So they’re trying to trick Helena and Tony into becoming aggressive so they can somehow see how its done allowing them to kill the real Vegans. Who in the meantime pretend to be robots and serve them vile soup.

This is so ridiculous on any level. Why do the robot Vegans let the real Vegans pretend to be robots and indeed why do the latter disguise themselves thus? Surely it doesn’t matter what they look like if the robot Vegans can’t kill them?  Later Zamara goes to Alpha to mentally absorb classic plays to see what inspires human jealousy so surely that is enough to tell her- why do they have to actually see it acted out? Why if they are actually robots do the robot Vegans spend presumably hours getting dressed up in elaborate costumes and give themselves expensive hairdos? Amusingly even when we see the real Vegans in their little hideout they remain masked even amongst themselves. One of them is Geoffrey Bayldon gamely playing their leader.

So the Vegans first trick Helena and Tony into believing they can just pop back to Alpha and when they do it is deserted. In the episode’s most interminable sequence they sort of stalk each other believing the other has tried to kill them, a ruse that surely Helena would see. And if they thought they were the only two on the base would they really separate so quickly? Mind you Tony is really the dullest character this series has ever had, three episodes in he seems to be there to make up the numbers. What we really want to see is a twitchy Koenig on Vega with his usual consternation and defiance and finally they get him and also Maya there.

In an episode packed with queries the biggest one is why none of the Vegans then notice Maya change into a parrot and fly off. If they’re all linked surely somebody would notice. She investigates the master computer which in keeping with season 2 so far looks more like a nightclub complete with a shiny tassles and large white balls than a piece of engineering. Oh and the corridors of the planet are the same set as her home planet though painted a more sober grey. It’s a wonder she doesn’t notice!

Anyhow armed with Shakesperian texts Zamara forces her cohort Zarl to woo Helena while Koenig watches. Clearly intended to be something of an erotic sequence this is hilarious stuff. With movement by Lionel Blair (!) and funky jazz rock music with busy drums, Zarl engages in a modern dance with Helena (how does she know the moves?). At the end I was half expecting the Strictly judges to award marks out of ten- a 4 would be generous here. Finally- phew- after 45 minutes of this whole palaver the thing ends with Zarl realising that he has had - you guessed- one moment of humanity and dropping down dead (or fused I suppose). Not much of a date then. All the other robot Vegans freeze and the real Vegans are free to take off those masks. As long as they socially distance of course. 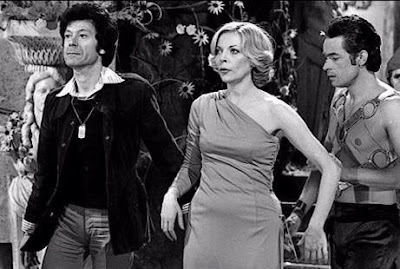 
I watched this episode with a mixture of disbelief and fascination. I’m sure it was never shown back in the day in my region possibly due to its content or maybe it was felt to be too silly for any time slot. The idea of a robotic race wanting to feel emotions is certainly a sound one but I can’t think of a worse way to convey it than here. Its as if Tony Barwick was writing something just to get to those last lines at the end. And yet I think this episode perhaps does just tip into that netherworld of being so bad it’s good!

All That Glisters
Another search for a rare mineral leads a small party to a desert planet where it never rains. However when they find the supposed mineral it turns out to be a glowing rock with some unusual qualities. On paper this probably looked intriguing and certainly director Ray Austin does his utmost to make it so but somehow the episode just doesn’t gel as well as it might. The problem is that developments unfold very, very slowly and largely within the confines of either an Eagle craft or a cave (we don’t even see the Moonbase.) When a piece of the rock is taken back to the craft it does a number of things. It seemingly kills Tony then animates him to collect another piece of rock with which it fuses together. It can temporarily paralyse people or hold them still or it can scan objects. It can do everything except be interesting because it’s a chunk of rock that won’t speak- not even to Maya when she turns into another lump of rock. Like many a mysterious alien force it’s abilities depend on what the writer wants it to do at any given time. For example how come it takes so long to scan the containers on the craft? Or why couldn’t it get Tony to search for water? 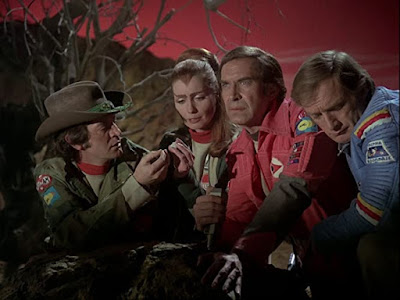 It is here that you miss the melodramatic aliens with whom Koenig normally tussles; all he and his crew mates are left to do here is work it out for themselves. I suppose it’s a more intelligent idea for an antagonist than a well -known actor in a glitter cape and red eye shadow but is really more of a literary concept than a televisual one. Mind you the glowing rock is a strong entry in the pantheon of telefantasy glowing rocks.

About three quarters of the way through they realise the rock is a living organism (the viewer will have worked this out much sooner) and that it wants water. Despite Maya’s ghoulish observation that humans are mostly water it seems unwilling to go with that plan. After extracting themselves from it’s grasp they end up helping it by creating rain in a hIppyish final sequence that seems out of character with the rest of the episode.

Matters are livened up by a guesting Patrick Mower playing an Irish geologist who manages to encompass most of his nation’s clichés except drink Guinness. Sporting a cowboy hat Mower is fun with a roving eye where Maya is concerned and also a roving accent! Everyone else is deadly serious but somehow it comes across as unconvincing however many directorial tricks Ray Austin utilises.