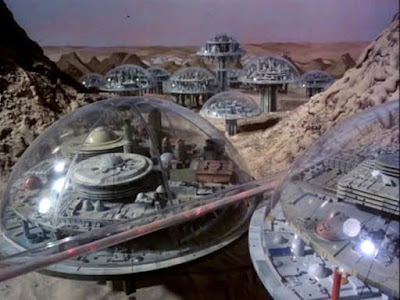 The viewer is thinking this must be a hoax and some aliens are pretending to be human but thankfully this does not seem to be the case despite guesting Freddie Jones adding a shifty tone to initial communications. A test run is established to take Koenig, Helena and Alan home (so much for the captain being the last to leave!) only an earthquake happens at the same time and the trio are lost neither remaining on Alpha nor arriving on Earth. Yet their vital signs are still working suggesting they are alive. We see them outdoors (itself a surprise for this show) somewhere that seems very Earthlike.So where are they? Like I said, check that title.

The episode gives Barbara Bain another opportunity to show her acting chops. It’s been a revelation to me how good she often is in this role when my abiding memory before the re-watches was of her as a rather dull, soft focus character. Here as Helena quickly succumbs to a virus she manages to do all the coughing and illness convincingly. The reveal of course has been signposted not just by that title but several developments and once again the characters work it out long after the viewer. Still director Tom Clegg shoots these scenes so strongly with hand held cameras for fights and making the hideout of the people they encounter as dark and dingy as it should be. The story ramps up the tension till the very last minute and the trio’s eventual escape relies on something as delightfully old fashioned as morse code albeit delivered through technology.

The story works well from a modern viewpoint too if you replace `pollution` with `global warming` the view of Earth in the twenty second century is not dissimilar to current forecasts. Plus as Helena falls ill it is very similar to those now familiar Covid symptoms. More than that though you get a real sense of danger that is often missing from the programme. It is such a rollicking story you can forgive the fourteenth century Scottish chief we meet his terrible accent! Freddie Jones and Isla Blair fare little better with their American ones. Why even the obligatory comic subplot – this time Tony’s homemade drinks- is not too bad. 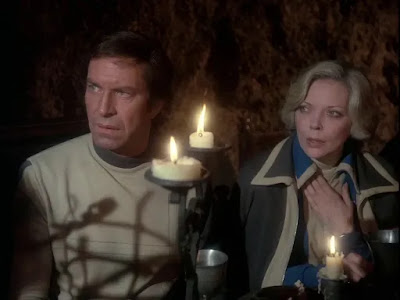 The Taybor
Alpha is visited by a flamboyant and loquacious space trader called Taybor whose initial gifts cause minor injuries but who is soon welcomed to dinner. Needless to say he is up to no good but it takes so long for this to become clear that the viewer’s attention may have wandered by then. In the role is Willougby Goddard a well known tv actor of the Seventies whose larger than life demeanour is perfect for this role. Sporting purple hair shaped at the top into a sort of Unicorn’s horn he looks ridiculous of course. The Taybor may well be a bit of a bore but Goddard enlivens him considerably with much pirate chatter and is a hoot when he gets drunk on Tony’s wine and ends up falling on the floor. There is one interesting aspect in Thom Keyes’ script. For the first time we get a sense of a larger Universe, a place with trade deals and markets, a place with planets that are casually name dropped. It makes you realise how each episode works in isolation with little sense of a broader journey. Surely Alpha sometimes meets people they can trust in off screen encounters? For example they must have had some decorators in since season one? It’s a wonder that this seems to be the first space trader they have met; the role is a sci-fi trope and the episode plays up the pirate parallels with abandon. If it lasted thirty minutes it would be fine but at forty five it overstays it’s welcome. Even Goddard’s presence cannot galvanise matters to move beyond a snail’s pace.

Visually it’s another trip to the seventies art college as Taybor’s ship is all plastic shapes and bold colours while his outfit is bright silk. His ship travels in hyperspace and there is much talk of the drive that enables it to do so. When we see it you cannot believe such a thing would generate any sort of power at all. Ultimately the story proves to be just as scrappy with another all powerful figure who can pull things out of the air and is always aware of what’s going on yet doesn’t notice Koenig disappear and place a tracker device on his ship. 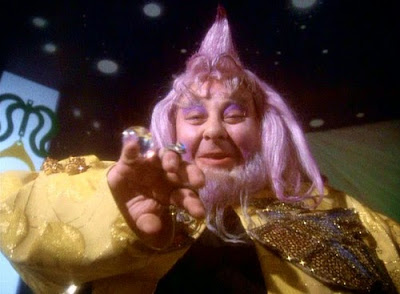 I suppose it is a change that his ultimate aim is not conquest or even more riches- he wants Maya. In a bizarre sequence the Alphans make him a robot duplicate with some sort of machine we’ve never seen before and probably never will again. Mind you Koenig could use it if he wanted to be seen in the command center but would rather pop round to chez Helena’s! For the second episode in a row the prospect of a return to Earth is initially greeted with less than enthusiasm by Maya yet elsewhere she acts as if she is human. Catherine Schell is not really being given the right sort of material and the comedic sort of relationship she and Tony have is awkwardly written.


Maya’s ultimate escape ruse is to turn into an ugly version of herself named in the credits as “slatternly Maya“ and played by Rita Webb a comedy actress known for her distinctive laugh. There is possibly something to be said here about beauty and loneliness but whatever it might be is lost in a haze of psychedelic spirals and throaty laughter. The thing that could really pivot the plot- the idea that Taybor’s hyperdrive could take them back to Earth- is not really explored properly. Keyes has Taybor- who has already shown his knowledge of the Universe and hinted at multiple contacts- not understand how it works. It’s a let- down in an episode that diverts for a while but soon becomes rather dull.