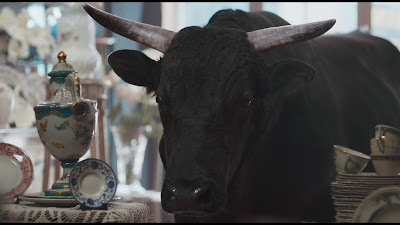 It starts with a view of hooves walking into a shop filled with fragile looking crockery. “A bull in a china shop?” enunciates Matt very clearly, “It should be going berserk….but it’s not.”  Accompanied by Mozart music, we then see this bull in increasingly unlikely stressful scenarios – surrounded by Morris dancers, being shouted at by a drill sergeant on a rain soaked parade ground, standing in a window cleaner’s lift which is plummeting down the side of a building. Then he’s in some sort of control room plotting the imminent arrival of a falling meteor about to hit the Earth. All around people are panicking but this bull remains unmoved. “Be like the Money Calm bull” says Matt, “and get money calm..”. Finally we see the bull actually standing on the meteor itself as triumphant as the ad! The full length version also includes the bull at a crazy kids party and on a fishing trawler in rough seas as a sea monster awakes!

Launched in June the ad is the fourth in the company’s somewhat surreal `Get Money Calm` series. Created by the ENGINE agency, directed by Nick Ball with Blink Productions and with post production from Untold Studios the advert was filmed in January though some of the post production happened in lockdown.

ENGINE creatives Charlie Gee and Tian Murphy explained the concept: “We asked ourselves ‘what’s famous for being the opposite of calm?’…. It was relatively easy to think of different scenarios, the tricky bit was …selecting the most entertaining and effective situations. They needed to be quick reads, ranging from the everyday to the epic, spanning across the different genres of stress, whether it was a social anxiety or a terrifying fear of imminent death.”

Nick Ball, the ad’s director was aiming for an advert “that started super small, and ended up super big. I didn’t want it to look like a traditional Blockbuster style parody commercial of Michael Bay style movies - but instead a more gritty and grounded approach to the cinematography and production design so it felt more naturalistic.”

All concerned wanted the bull itself to feel real rather than obviously CGI. To that end an actual two tonne bull from Uruguay was used with the crew travelling to the country to shoot it from every possible angle in a very hot old car factory. Remembering the shoot, Gee and Murphy said: “We all stood there in silence, holding our breath looking at this huge, imposing, powerful bull thinking, what are we doing...? Thankfully he was really calm and had a wonderful relationship with the handler who was very protective.”

The idea was to use as much of the real bull as possible and then add post production effects to clean up its appearance. A fully CGI replica was created for scenes where it wouldn’t be viable to use the real animal such as on the swaying trawler. Sometimes a hybrid of the real and CGI bull is seen.

David Fleet, the head of VFX at Untold Studios said: “I really enjoy the way this spot builds. From the unusual, yet plausible, china shop scene through to the straight-up extraordinary scenarios like the window cleaning cradle, the fishing trawler and the asteroid scenes. It’s difficult to not find the window cleaning scene funny. I mean, what’s a two-tonne bull even doing there?”

This is really the key to the ad- by placing the bull in such unlikely places it raises lots of laughs when you first see it. For the company of course the priority is to focus on their product. Lloyd Page, Marketing Director at MoneySuperMarket said: “The campaign is about communicating the universal, wonderful feeling of calm you feel when you know your bills are under control with MoneySuperMarket”. Even if you don’t need to use the company perhaps we’d all be better off at the moment being like that Money Calm Bull.

“A bull in a china shop?” It is one of those expressions we use without thinking how unlikely it would be to happen. The phrase was first used in an 1834 novel by Frederick Marryat called `Jacob Faithful`. Its origin is believed to come from seventeenth century London when live cattle brought to the market occasionally strayed into nearby shops causing considerable damage to produce especially to china. Nowadays it is more used to describe a clumsy or nervous person who is “like a bull in a china shop”.

Heycar- “Buying a car never felt so good”
Online car marketplace Heycar is a very new company which only launched in August 2019 and their most recent ad is a refreshing change from the sometimes over elaborate and epic car adverts. Here, a man is lip synching – and miming - enthusiastically as he sits in his brand new Audi S3 car. It’s a very simple but effective idea focussing on actor Oliver Britten’s ability to pull expressive faces and generally get into the song in a total way. The song is “Good Feeling” by Flo Rida which was a UK number one nine years ago. The actor Oliver Britten has previously appeared in the likes of Doc Martin, Doctors and The Limehouse Golem.

The ad was launched in August, created by Atomic London and directed by James Rouse. Its great and here it is…


Virgin Media  – “I really, really, really, really, really, really like you.”
Carly Rae Jepson’s song is the soundtrack for the latest Virgin Media ad to show how essential our phones (well, Virgin’s phones actually) are in the current pandemic scenario. You’ll probably remember the `Come Together` one earlier this year which used multiple home musicians performing the song or the army of kids giving it some welly on a version of `Nothing’s Gonna Stop Us Now`. Both were signposted by company as being pick-me-ups for this strange year and the latest offering is similarly angled.

Here there are some mini dramas each of which demonstrate how it’s our phones that keep us connected whether we can meet or not and how to date in the so called New Normal with social distancing, the Rule of Six, being from separate households and the rest of it.

So we repeatedly see two girls spending the day preparing to meet and constantly communicating with each other, there’s also a couple of Tik Tok style dancers, a guy who uses photo apps to take a distorted picture of his girlfriend assuring her “you look beautiful” and a hopeful lad texting his girlfriend to see if they can try again (she says yes!). It finishes with the main couple lying together in bed after falling asleep on a video call. It’s a lovely world thanks to Virgin Media! It is one of the better `let’s get through this` ads this year though events have overtaken it somewhat. In many parts of the country the things we see here are once again not possible.

Created by adam&eveDDB the ad is called `Stay in love, stay connected” which sounds a bit like one of those government pandemic slogans and in their press release Virgin Media say: this is “the third instalment of morale-boosting ‘Stay connected’ campaign”

Paul Knott, Creative Director at adam&eveDDB said, “We looked to transition away from a UGC-only approach. Instead, we put the focus back on shooting the scenes, albeit with the current restrictions in place.”

All of which may be true but of course other smartphones are available and can offer exactly the same togetherness. Still I like this ad which seems very natural and is so well matched with the song. Those couples featured though should beware that the song’s lyrics seem to place doubts about the relationship- “It's way too soon, I know this isn't love,” sings Carly… 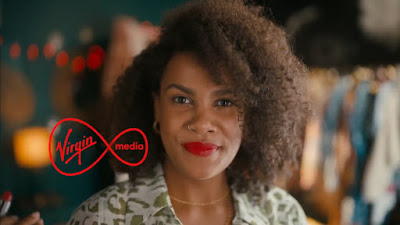 P.S…
I don’t think trying to evolve an established series of ads rather than coming up with a whole new campaign works too well. There’s a couple of examples running at the moment. Confused.com have abandoned the desert road and broad narrative (remember “the year of confusion”?) for “little confusions” in an English town. Go Compare have gone meta with opera singer Wynne Evans literally talking to himself as Gio Compario and even showing us a clip of his real self singing. Somehow these ads are nowhere near as engaging as the campaigns from which they sprung.