Against this short time frame Koenig has to make one of his difficult decisions. Given that he is always right about the hidden intent of visitors to the Base you’d think the others would give him some slack by now but here they are again arguing for these exiles even if it threatens their life support system. Au contraire says Peter D, we can make your life support better if you rescue us. You know what’s coming of course. When Peter and his other half Stacy Dorning are let loose on the system their real intent is revealed.

The early suggestion is that this will be a dull episode- the sequences involving hoisting Cantor’s tube from space into a hitherto never mentioned research cave is typical model work stuff that is always helpful in padding an episode out a bit. There’s even time for a scene where Helena has sculpted a life sized face of herself from clay (!?) and Maya uses it to become her. Thus we have to sit through a scene that is as excruciating for us as it clearly was for Martin Landau when they want him to choose the real Helena. lol (not)

Just when your attention is headed for the door the episode comes alive with a few genuine surprises as Cantor first of all is revealed to have faked being affected by the base’s guns and then he and Zova teleport themselves back to the home world with talk of revolution and taking over. Defying expectations Peter Duncan is very effective in this role and though she has less to do Stacy Dorning proves his equal in sly smiles and a change of tone now and then. 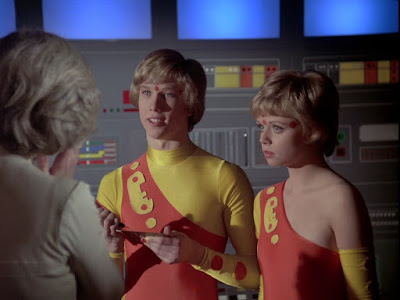 The new Costa uniforms were a surprise.


The climax is quite bizarre at first as Helena claws at Cantor’s face but she is damaging the membrane that has protected him during his long space journey and he starts to age. It’s a well done sequence even if Cantor’s hair does go a bit AWOL. Course it doesn’t make a lot of sense as there are surely gaps in this membrane to allow the aliens to eat and breathe?

Visually the season seems to have taken a step back from the first with another alien planet decorated by the same people who did last week’s while the alien’s jumpsuits are a vivid bright orange and yellow. I was amused by the superfluous danger signs flashing throughout the scenes when the pod is being examined not to mention the less than rigorous safety measures. One minute there’s two guys in hazmat suits while everyone else stays behind a sealed window and door, the next they all pile out in normal clothes.

Maya seems to have settled in though, with a uniform and her own station in central command to actually do some work while Tony drinks coffee. Does he always have a coffee because the producers think that’s what Italians do? Nobody else in the Command Center, as its now spelt, seems to get one. Maya’s ability to change is also something everyone seems to have got used to. When she’s a big alien gorilla nobody turns a hair!

Donald James’ script manages to make a familiar type of scenario seem fresh with plenty of ideas even if his attempts at humour fall very flat.