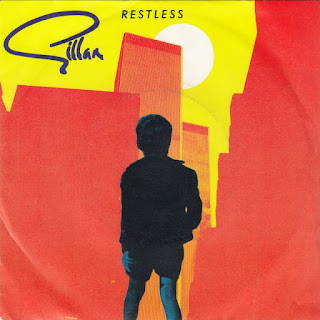 Jon & Vangelis: I'll Find My Way Home[6]. A repeat from the 07/01/1982 edition.
Phil Lynott: Yellow Pearl [14]. This is the third Top of the Pops of 1982, but that Jon & Vangelis song was the first repeat performance from an earlier edition. The reason is the increasing popularity of videos. Here's another one because Phil Lynott (although David "Kid" Jensen -like Peter Powell- refers to him more formally as Phillip) can't come to the studio.
The Mobiles: Drowning In Berlin [13]. BBC4 have skipped the 14/01/1982 edition because it was presented by D*v* L** Tr*v*s. This is frustrating for modern viewers because we get two back to back editions with a lot of the same songs. Still when two of them are Yellow Pearl and Drowning In Berlin that's not so bad. Passing over the 4/01/1982 edition which was closed by a re-release of Being Boiled allows this BBC4 repeat run to continue it's tradition of missing every song by The Human League except Don't You Want Me. The Mobiles, unlike Phil Lynott, make the effort and come in to the studio. The lead singer is doing her best but she's overshadowed by the guitarist on her left who looks like the younger more attractive brother of Lurch from The Addams Family. 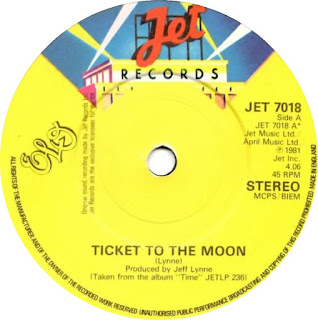 Electric Light Orchestra: Ticket To The Moon [26].This Zoo routine starts off with a couple CSO'd onto an moving background of black and white shapes. Could we be about to get a Zoo dance routine which makes use of modern electronic effects to create an abstract dance space? No. We quickly fade to the studio and watch some dancers go through a dated ballet-lite routine. It's Legs & Co deja vu all over again. A man sits at the back of the stage in a spacesuit costume. Ticket to the moon? More like ticket to instant death. (John- He probably left his ticket in them as well so he's not going to the Moon anyway)
Meat Load: Dead Ringer For Love [7]. Another song that featured on the 07/01/1982 edition. We get to see the video again, although this time it's cut short.
XTC: Senses Working Overtime [41]. The pilot episode of The Young Ones was filmed in January 1982. It's hard not to shake the idea that Rik Mayall based some of Rik's facial expressions on Andy Partridge.
Orchestral Manoeuvres In The Dark:  Maid Of Orleans (The Waltz Of Joan Of Arc) [31]. Andy McCluskey has done up the belt on his leather jacket but not the zip. The resulting effect looks like a lumpy bin liner tied round the middle with string.
Christopher Cross: Arthur’s Theme (Best That You Can Do) [18]. The top 30 countdown boldly sails past number 20  to halt at this slice of wimp rock sitting at number 18. Christopher Cross looks like an older version of Chris Pratt's character from Parks and Recreation.
Foreigner: Waiting For A Girl Like You [8]. This time the top 20 countdown continues to 8 so that we can marvel at Foreigner filmed in blur-o-rama.
Number One: Bucks Fizz, The Land Of Make Believe. A repeat from last week's skipped  D*v* L** Tr*v*s edition. What are Bucks Fizz wearing? Bobby G's done up in a shirtless Captain Hook outfit, Cheryl is dressed as Peter Pan, and Mike might conceivably be dressed as a lost boy. You might think there's an attempt being made at a pantomime theme. Why then has Jay pulled on a wedding dress?
Closing Titles: Shakatak, Easier Said Than Done [22]. Zoo this week featured Alison, Colin, Foxy, Helen, Mary, Nola, Voyd, and Wanda.
Performance of the week: XTC: Senses Working Overtime