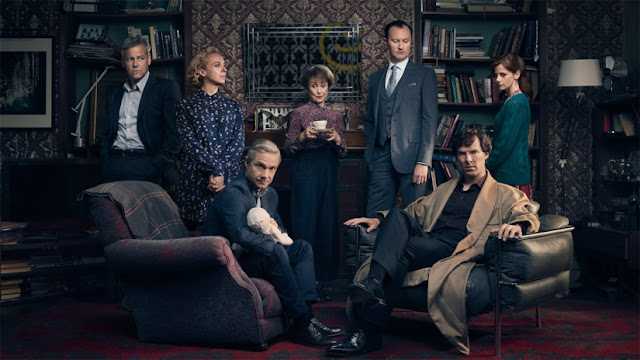 Spoilers beyond this point…


Mark Gatiss chooses this moment to deliver his best script for the series to date as he deftly manipulates the characters through a deceptively simple case of a death that leads Sherlock into a more knotty matter of smashed busts of Margaret Thatcher (and yes she does get lampooned but not as much as you might think). Though ostensibly a more straightforward plot than some of the knotty mysteries the series has offered, it has more personal stakes and a great balance between action, mystery and dialogue.
The episode opens with a burst of humour so broad you might need to check you’re not watching a Children in Need special. A spaced out Sherlock behaves like a hyperactive child as his straight laced brother Mycroft briefs him on what will be the true story of the recent events. It’s a sign of the deceptions that are woven through the narrative. Yet the mood changes as matters become more personal and Sherlock catches up with the bust vandal who turns out to have a vendetta against Mary from her past life as an agent. Great gag when he does show up too!
Till now I struggled to match the idea of Mary’s past with her present self; it just seemed too incredulous a development to believe and I thought it must be the series’ jumping the shark gambit. Instead it turns out to be rather an ingenious way of developing a character and as Amanda Abington dons a variety of disguises to escape her pursuer around the world you can absolutely buy it. The Mary that we previously got to know was just another disguise really. The comparison of these globetrotting scenes and the gradually revealed attraction  John has for someone else- and we’re left in suspense as to how far that went- could not be more pronounced.
Apart from some breathlessly unravelled cases at the start, the episode leans more heavily on espionage rather than detective drama and none more so than the final stretch in which the villain of the piece is revealed not to be some posthumous Moriaty plan as Sherlock (and indeed the viewers) expect but something much more likely. Not for the first time in the episode Sherlock uses his verbal patter to delay matters but there’s a stunning twist you need to see.
The episode pushes and pulls at the differences between Mary’s old life (balaclava wearing missions, guns, danger) and her current life (marriage, baby, domesticity) that you just know something has to snap. Yet you’re never sure what it will be and Gattis’ script keeps you guessing throughout. That it manages to encompass a fight sequence that looks like it’s out of a film is just the icing on a very impressive cake. Director Rachel Talalay brings her own big screen experience to bear on all aspects of the production. 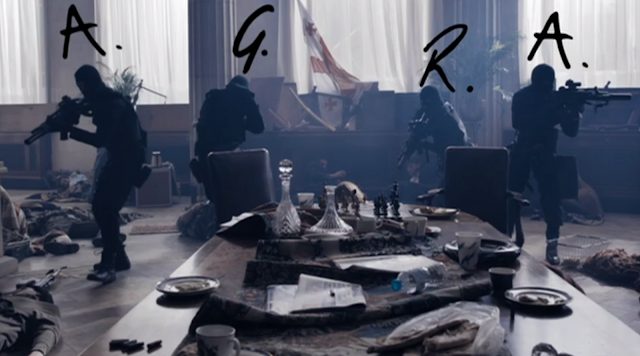 Needless to say with such a rocket of a script to hand all the actors give amazing performances; Benedict Cumberbatch has added more humour into the role of Sherlock while his deductive hundred miles an hour delivery is like listening to some off beat opera! Mark Gatiss’ Mycroft seems to have become steelier, why do we even trust him? It must be fun to write yourself a role as wily as this! Amanda Abington gets to showcase an impressive range of emotions (her awkward American traveller is a hoot) while Martin Freeman again shows just why this role of Watson is perfect for him. All the emotions kept under the surface yet showing in every movement. Additionally Rupert Graves’ Lestrade is always good value and I’m hoping one day he might get his own spin off series. There are a couple of riveting guest performances too from the always impressive Sacha Dhawen as the damaged former colleague of Mary’s and Marcia Warren as Miss Norbury who turns out to be more than just a fuddy duddy secretary.
The episode rekindles the excitement of the series’ first six episodes with a sense of abandon and intrigue. Sherlockian experts are already poring over the nuances to pick up clues and references but from one viewing what I have deducted is that this has set the bar for TV drama in 2017 high.