Spoilers ahead. Or are there? Yes, actually there are.
Though I enjoyed the game it hinged on a somewhat mannered performance from an actor normally good at slipping into roles. I’m not sure whether this is down to the writing or the performance but while Toby Jones lugubriously slimy Northern toned amalgam of any unpleasant billionaire you may name might sit easily on Steven Moffat’s other show if he turned out to be a big green alien from the planet Morg, here it just seems too much. In a show like this only Sherlock should behave like Sherlock; everyone else is smaller and more normal. Isn’t that the point? When the whole cast starts behaving like Sherlock you do wonder if you’re watching an episode or simply the detective’s drug addled version of an episode.


So apart from Jones’ strained attempts to be more evil than even Moriaty we have Miss Hudson speeding about in a red car with Holmes tied up in the boot and brandishing a gun. We have Mycroft spending his time watching surveillance drones following Sherlock about London and we also have the actually dead Mary appearing as a sort of conscience with a distinctly Sherlockian tone. The entire thing ends up too arch for its own good- and this may of course be deliberate. Take the hospital room in which Sherlock ends up helpless and at Smith’s mercy – doesn’t it look like a stage set. Perhaps this is deliberate too? Yep, Smith is a serial killer btw which is actually a disappointing resolution though at least we do have the episode’s most insane / fun part when it seems Holmes is the one with the issues and Smith is merely a brash businessman.


You have to wonder too about such scenes as the opener in which Smith’s management board and even his daughter seem remarkably agreeable to being drugged. This scenario, apart from being ridiculous (who would really just sit there and go along with it?),undermines the mystery as to whether Smith is a killer. How could anyone who would do that not be?


Perhaps somewhere inside this stylised construction there are messages about friendship, about public personas and even, somewhat chillingly, about a celebrity with easy access to a hospital. It is however often bogged down by its presentation and performances. I can’t help but feel a less elaborately staged drama might have got those points over better. Other critics have already highlighted the episode’s excessive use of drugs as a tool to support the detective’s plan which seems like a rather unfortunate message to be sending. 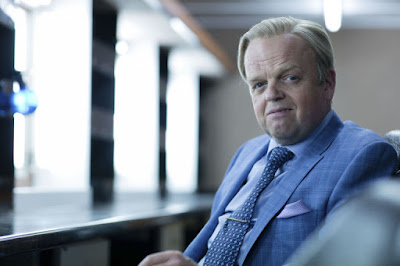 It is very telling that the best scene arrives near the end with just Sherlock and Watson in a room together talking about stuff. It has some great notes after all the noise of the previous 85 minutes and feels like we’re back in reality. It’s a shame too that Martin Freeman’s deft performance throghout the episode may be lost amidst the clamour. He really does give his all here- and this makes it harder to criticise the episode- every nuance so perfectly delivered. Everyone around him is visibly giving a performance whereas Freeman’s Watson seems real, torn between the past and future. Off the leash entirely for the whole episode Benedict Cumberbatch exudes an exhausting energy the whole time and seems to be having fun.
Having just arrested one crazy villain the episode ends on a cliff-hanger when the psychologist that John’s been seeing turns out to be Sherlock’s long lost (and of course) crazy sister who we’ve already seen as the girl on the bus last week. Different characters before she reveals her true identity. Hang on, isn’t that how Moriaty was introduced back in the first season?  For a moment I thought she was going to turn out to be Moriaty! With this series you wouldn’t put it past them.
Posted by John Connors at 00:23