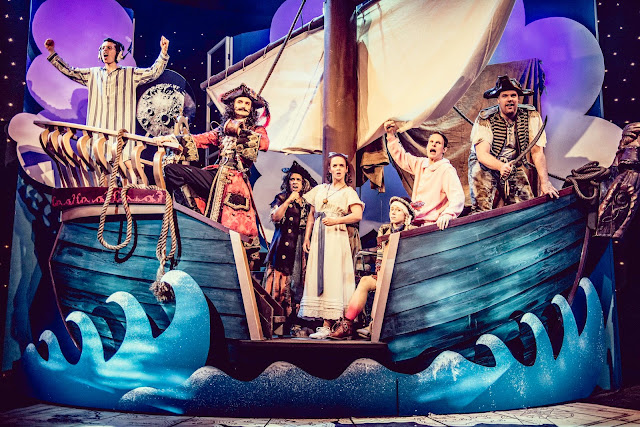 Most people know the Peter Pan story- I’ve seen two different versions in the past year- and most people have seen a rubbish play. Usually in school but not always. Mischief Theatre are a company whose The Play That Went Wrong became a sleeper hit in the West End and they have another play The Comedy About a Bank Robbery on at the moment while Peter Pan Goes Wrong debuted in 2015. Both take the premise of an amateur drama company – the Cornley Polytechnic Drama Society-staging a play during which anything that can go wrong does. There’s also a fourth wall busting knowingness about the productions which leak into the personal grudges and crushes of the cast members as well as sometimes `accidentally` including the technicians and crew as well. The result is literally organised chaos.


Some may find it too silly or lacking in sophistication- though the amount of timing and rehearsal it must take is surely enormous- but if you’re willing to go with it you will surely love it. The stage show is probably not quite as frenetic as this hour long version which allows you no time to recover from one gag before another one kicks in. Refreshingly it avoids contemporary references for the most part – apart from a recurring taxi gag- finding fun in situations that might have attracted the attention of classic silent comedians back in the early days of film. Doors, bunk beds, windows, revolving sets and props all become the cause of some calamity or other and there is some impeccable timing to make it all seem so messy.


The range of characters means that everyone plays at least two roles and this itself is excellently realised by Nancy Zamit whose quick changes from Mrs Darling to the maid Lisa just get funnier each time. Some of the ideas are genius- one character Dennis played by Jonathan Sayer, one of the show’s writers, can’t remember his lines so has to wear headphones and ends up relating everything that is said to the audience. There’s a hilarious sequence where the dog Nana played by the bulky Lewis Henry becomes stuck in the dog flap on the door having to be cut out while a musical number is taking place. When Peter Pan flies in he pulls off a window frame! I can’t list them all- and these are all in the first fifteen minutes.


The pace is relentlessly hilarious in a way that I haven’t seen in any comedy for a very long time. Another co-writer Henry Shields seems to riff on the spirit of Basil Fawlty at times interacting with the audience to declare this is not a pantomime. The game David Suchet shows a gift for this type of comedy as he struggles to do his narration and even gets to have a Poirot moment.


This is the sort of thing there should be more of and if it sounds like something you like it’s still on the BBC iPlayer and you can check out their latest theatre productions on their website. Mischief Theatre
Posted by John Connors at 00:45