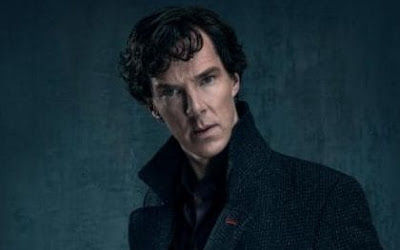 I was watching Endeavour, (stick with me, this is relevant) another detective drama that leans heavily on a well- liked source and I started thinking that it might have been better for Russell Lewis and co to just have invented a Sixties character whom we could follow rather than making him a young Morse. Many aspects of Shaun Evans’ performance and the characters surrounding him are constrained by the need to try and make us believe this is the same man as that portrayed by John Thaw.  Yet you feel both the actor and series would be better served if they had more freedom to create something new; it’s why Roger Allam is the show’s true asset because his is a character of which we have no preconceptions. So when I started to watch this episode of Sherlock later on the iPlayer the same sort of thought struck me.  While the first two series did draw the distinction and were very much a modern, updated Sherlock Holmes since then it seems to have morphed into something else. On the other hand does it even matter what it’s called?
Penned by both Steven Moffat and Mark Gatiss the episode pools their respective writing preferences so well; the former’s love of deception and twists is matched by the latter’s predilection for the macabre and the darkly humorous. The story also demands that the viewer suspends both their cynicism and their disbelief.  I don’t doubt that everything is explained on screen but it will take two or even three viewings to absorb it all. Hence we’re left to wonder whether five years plus of forward planning by Sherlock’s long lost sister Eurus from within a top secret secure facility is plausible or even possible. Or that however much information she might be able to give to Mycroft and MI5 whether Sherlock’s duplicitous brother would really allow her five minutes of unsupervised time with meddlesome Moriarty. In fact why didn’t Mycroft just ask Sherlock to work things out if he was having such trouble? Would the entire intelligence machine really be so threadbare as to have to rely on a convicted murderess? At the end I can’t work out either why the in control person on the screens becomes a gibbering wreck inside a burned out house. Was all the games stuff pre-recorded? In some ways these are details we can work out later, unless of course you already have. There are probably others indeed Digital Spy have helpfully compiled a list of 18 though I can actually answer some but if you want to check them out, they're here.
The episode is clearly designed to confuse us in such a way; the casual viewer would be utterly baffled! Time and again we are wrong footed by a narrative that is presented from multiple perspectives sometimes to the point where we are seeing things that are not really happening at all.
The overarching threat involving a little girl on a plane full of comatose passengers turns out to be a fiction. Eurus teases memories of a dog called Redbeard, a pet whose disappearance has seemingly been erased from Sherlock’s memory, but which is later revealed to be a trauma of much more serious dimensions. Euros’ cell is- we and Sherlock assume- protected by bullet proof glass but courtesy of a superb reveal there is no glass at all!! There’s a sequence when Sherlock wakes up in a room that turns out to be a `set` whose walls he pushes over revealing he is now outside the old family home, a moment symbolic of this entire series. There’s a great gag based on a clearly disguised Holmes which turns out to be Mycroft rather than the Sherlock we’re supposed to think it is.
Each of Eurus’ lethal puzzles that give Sherlock, John and Mycroft unsavoury options which nobody would want to choose from are then upended at the last minute so essentially they can’t win but their morality and relationships are tested. The best example is when it appears that, against all the odds, Moriarty really is back as he arrives in style at the prison…only for the caption `Five years earlier` to pop up rather tardily after we’ve taken in the moment! 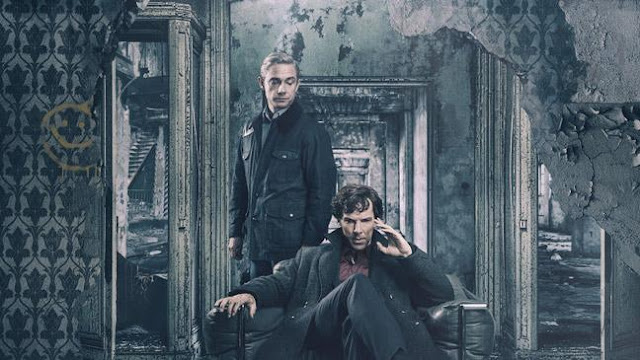 This invigorating cat and mouse game is as much afoot between us and the writers as it is between the Holmes’. It is the closest drama can come to being interactive because although we can’t affect the outcome we can speculate and guess while it unfolds. Of course it only works because matters progress so swiftly it leaves us no time to ponder on the verisimilitude of what we’ve just witnessed before we leap to the next thing. It’s the opposite of other tv detective dramas which luxuriate on every plot point, as if trying to help us work it out. Moffat and Gatiss instead ask us to be like Sherlock and spin multiple problems around in our own mind palaces. No wonder these episodes take so long to write.
Never mind Conan Doyle, there are plenty of influences at work here, notably the Redbeard motif which calls back to Citizen Kane while the ancestral home strands seems to echo James Bond’s least Bond-like film Skyfall, ironic considering how this series of Sherlock has been accused of turning into Bond. Mind you here we get a big base on an island that could easily be from a 007 caper. There is also, I’m told, quite a bit of the Saw film series in some of the puzzles. Meanwhile Moffat and Gatiss’ Doctor Who influences have never been closer to the surface in this series than they are here with the puzzles being a more adult version of those once seen in a 1974 story `Death to the Daleks`. The overall scenario draws from many a Moffat era time hopping Who tale for his other show. OK we’re only leaping around within a lifetime and back and forth by five years but Eurus is a character type who could easily be manipulating time itself; her hypnotic ability resembling that of the show’s arch villain The Master. And where did The Master end up in one story? Well he was in an isolated prison on an island where he was actually in control even though when the Doctor visits him he appears to be contained”! We even find John trapped down a well though no sign of Lassie - I think they missed a trick there! Needless to say the performances match the tone of the story with everyone being a stand out though it is Sian Brooke’s unusual mannerisms and changing voice that linger longest as she shows just how you can be menacing even on a screen.
This phenomenal whirlwind of a plot comes to rest rather suddenly with an ending that, after all the hardware and trickery, is simply a brother and sister reuniting as equals again with all secrets out in the open. It’s probably not the conclusion many expected and it might have been tempting- and certainly in the character of the piece- to have had some melodramatic last minute turn as the episode often hinged on good and bad choices. Yet there is something satisfying about the way they chose. Sherlock and Eurus in the shell of the old family home stripped of all the preceding artifice. However nothing can take away the grand sweep of the 90 minutes which finally show our hero that sometimes the heart is as important as the head something of course that John has been proving from the start.
The coda suggests a back to business air though media reports indicate this is either the last ever episode or at least the last for some time. Perhaps the third and fourth series’ agenda of familial and personal crises was actually always the point of the show and those first two seasons were merely scene setters to show us what Sherlock’s regular life was like. Would anyone- writers, actors, even viewers - really now be happy to just go back to (ab)normal cases?
Sherlock remains this decade’s most fascinating ongoing drama series with a brio that rivals on all channels cannot match. That kind of bold production is bound to come with a few flaws and developments we do not expect but isn’t that thrill the whole point?