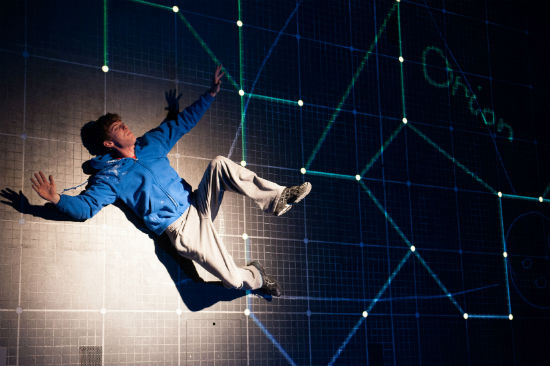 14 year old Christopher Boone suffers from an aspect of Asperger’s Syndrome though Haddon has since stated he regrets using the name of the illness simply because Christopher himself is supposed to have written the book which is the conceit by which we enter his crazy paving mind. Though brilliant at maths, he struggles to communicate adequately though never lies and speaks literally as he sees. Wandering around one night he finds a neighbour’s dog called Wellington has been killed with a pitchfork. He is determined to discover the culprit and keeps a diary of his investigations but discovers far more than the fate of the unfortunate canine. Suddenly his whole, fragile world is turned inside out and he faces some awkward moments and what is for him a potentially perilous journey.

How to realise the story on stage has been solved in two ingenious ways. His thoughts are expressed by a number of members of the company but mainly a teacher called Siobhan (Niamh Cusack) who seems to be the only person he trusts once his relationship with his patient father Ed (Sean Gleeson) runs into difficulties. Then there’s the staging itself. At first it resembles three sides of a box until you realise the tall walls are representations of graph paper. Lights flicker on and off along lines, some portions open, steps appear, things are scrawled on the floor and appear on the back wall which itself can move backwards and forwards. We are inside Christopher’s mind to a large extent, these straight lines and walls representing his organised way of thinking. It’s an extremely adaptable set that can double for almost anything and with which can be climbed if need be. At the end of the first half and for what we might call the encore, it proves just how much such a technical delight can become an emotional one too. 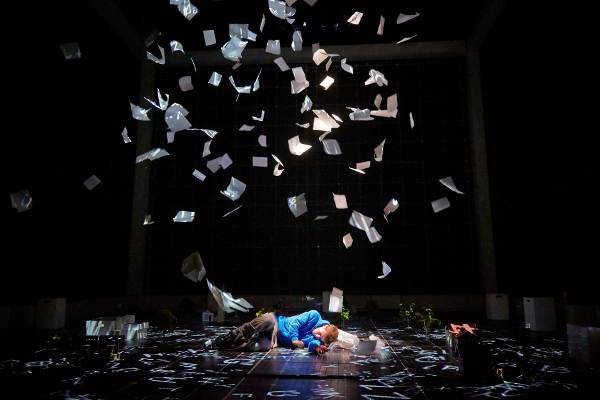 At the heart of the production though is Luke Treadaway, deservedly winning an Olivier Award earlier this year for a role that clearly uses up huge energy especially in the current heat wave. If we were sweating in the richly covered seats and confined space, the actor was dripping buckets but never faltered. Such a performance could easily be misjudged because Christopher should not be a manipulative character in that he says as he sees. Emotions as you and I know them are alien to him- he cannot even bear to be touched except with his father palm to palm. Simon Stephens includes the humour that arises from what might read as a tragic story and Luke Treadaway is elastic and mesmerising from start to finish. We never feel manipulated by this character or this actor and the results are stunning especially as he is portraying a teenager and is actually 28!

It’s an entrancing, fascinating production that is full of visual surprises and moments where the absurdity turns to seriousness in a second. The confines of the Apollo Theatre suit it perfectly and if you happen to get a seat that’s a prime number there’s a little extra too. If you can get to see it, you really should and you never know you might just learn a bit of number work as well!