The documentary follows the group on what would turn out to be its last tour as a reasonably successful outfit. Down the road were splits and a disappointing second album though you wouldn’t think so from the enthusiasm all concerned display here. TRB’s music is best described as chunky; that is to say it’s built on the thick guitar playing of Danny Kustow, the Keith Moon influenced drumming of Dolphin Taylor and waves of 1960s style Hammond organ vibes. The results are far more eclectic than you might imagine if all you’ve heard is the hit `2-4-6-8 Motorway` or the well known anthem `Glad To Be Gay`. There’s often a sense of the vaudeville about Robinson’s witty lyrics and on stage delivery. The film included considerable footage of the band and their seemingly devoted audience from a gig in one of those medium sized theatres.

Several songs- shown in full- represent the breadth of TRB’s repertoire from the straight forward new wave of `Up Against the Wall` with its depictions of “panic in the County Hall” to the mockney vocal and good hearted humour of `Martin` which –with different lyrics- might have been sprung from the music hall of  decades earlier. `Glad to be Gay` is sung with bile and a sneer, Robinson perhaps mindful of the cameras. Interestingly this is the one song on which the crowd seem unsure whether to join in or not and Gold never shows them. It is clear that however open minded people around Robinson thought they were this song made some people awkward. Musically it could almost be a waltz, a rolling tune is an odd counterpoint to lyrics like “resisting arrest while being kicked to the ground.” `Power in the Darkness` sees Robinson hamming it up even more as he dons a false nose to portray an enraged politician railing against minorities though you wonder  how much of the subtlety of Robinson’s approach registers. The real surprise is the love song `You Turn Me On` which is smooth enough to come from Eric Clapton’s latter years.

Off stage Robinson is as candid as you might expect about his life and philosophy but he puts his views across with politeness and patience. He is very articulate especially about his sexuality - “”you’ve the person your parents are still warning you about” he says – and his socio- political standpoint.  Sometimes he is ridiculously right on exemplified by a sequence during a planning meeting for the group’s fan bulletin wherein a discussion over the inclusion of a silly photo of Kustow in drag ends up as a serious discussion about women’s rights. You sense that everything, however trivial, could end up with this sort of discussion; Robinson himself admits later that he can’t resist plunging into issues when asked the simplest of questions. Perhaps it is this that wore down his band-mates as time went on? The success of Gold’s programme is in allowing the cameras to stay where they are so he has his say.  It is an approach that wins dividends especially when we the singer helping out at the Gay Switchboard the pre- Internet lifeline for teenagers struggling to come to terms with their sexuality. 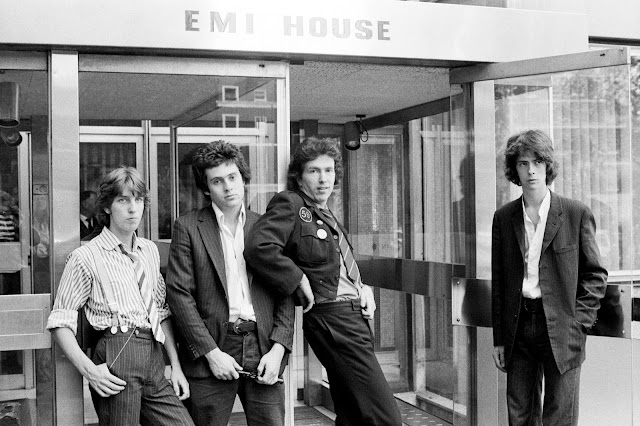 You can’t fault his loyalty to fans either as we him hand writing and addressing replies to fan letters and you wonder how many others, even at this comparatively lower level of pop’s tier, would bother. It’s a shame Gold doesn’t talk to those fans more. Apart from a brief vox pop after the show, their opinions remain unheard yet the feverish enthusiasm they show for the songs suggests the band connected with them at some level even if it’s only because kids like jumping around to catchy songs. There might well be a disconnect between what the band and the fans feel about the music but despite ample running time Gold doesn’t go there.

The film is a snapshot of a level of the music business where hard work delivers success but wears down its participants. Kustow’s on camera reticence may well be exhaustion; Taylor is clearly doing the maths in his head when he talks about falling sales and pondering about TRB’s position in the business; it’s no wonder he left shortly after and has ended up as a music publisher. You get a sense that both of them sit at polar opposites and a distance removed from the intensity of Robinson’s obsessions.

What the film also depicts is how established broadcasters were trying to get a handle on youth movements. Too Good To Be True sits just before the moment when television began to change its approach to pop and rock. As older programme makers retired, a new generation that grew up in the 60s and 70s started to make their mark and this would lead to a slew of 1980s ground breaking shows that presented youth culture as a lifestyle rather than a curio. Gold’s film still has the old fashioned posh commentary (amusing when quoting from the NME) and a one step removed distance almost as if studying a new life form. Yet this approach means we get proper arguments and opinions from Robinson rather than the sound bites you’d get if someone like him were around today. There are a few gauche attempts to modernise the formula- such as at the start when they all stare at the camera trying to look enigmatic- but this is still an old school sort of documentary. This un-showy clarity is its main strength though and leaves you feeling as if you’d travelled back in time and met the group. Today’s wobbly cameras and tight edits rarely examine or reveal their subject as effectively.
Posted by John Connors at 20:47