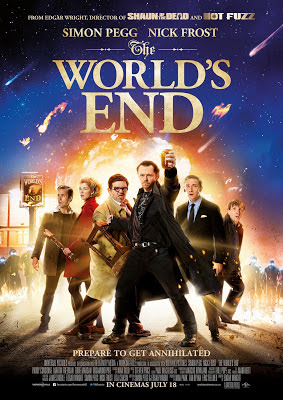 It is heavy going too. I know the end of the world is likely to be but this is a film that seems seriously longer than its official 109 minutes. That said, the first part is excellent as five friends meet up in the dull town of Milford Haven to re-visit an unfinished pub crawl from 20 years earlier. Only of course they are now pushing 40 with tangled lives, commitments and adult sensibilities. Except for Gary King who still yearns for the simplicity and good times of his youth to the point where he more or less wears the same clothes. He lies to get the old gang back and gradually they fall into the roles they occupied all that time ago. It’s a terrific premise for a film, especially when the early 1990s musical soundtrack kicks in.

As King, Simon Pegg gives the performance of his career, aeons away from his default persona but with bags more nuance of character than recent more high profile film roles. Even when the film flags, he is giving his all. The way the different personalities spin off each other bringing up niggles, grudges, rivalries over girls and so on is scripted with panache by both Pegg and director Edgar Wright. Even when the sci-fi does start it is courtesy of a stunning sequence that literally happens out of nowhere. So far, it is looking like a classic.


However, it soon becomes apparent that Wright has already used up his arsenal of tricks early so subsequent fight scenes begin to wear on the viewer because basically the same thing is happening in different places. The pub crawl motif fizzles a bit and though they do visit all the pubs, once we discover they are populated by what the gang think are robots we’ve lost the fun of pubs altogether. Perhaps Pegg and Wright felt American audience wouldn’t get the idea of pubs. There are some strong visuals later on as the robot things (nobody really knows what to call them which is one of the film’s rare later funny bits) stalk the town with eyes and mouths spilling light.


The titular pub turns out to be the control centre of the aliens and in a very shouty sequence we discover the truth of what is going on which, frankly, is far less interesting than what we thought was going on. The whole end sequence suggests an attempt to cap the film with a serious message about humanity and friendship but it is too drawn out with people proclaiming things their characters seem to have suddenly thought of rather than developed over the course of the film. It seems rushed on the one hand yet packed with uninvolving exposition on the other while the final end is so bleak that the laughs are nowhere to be had.