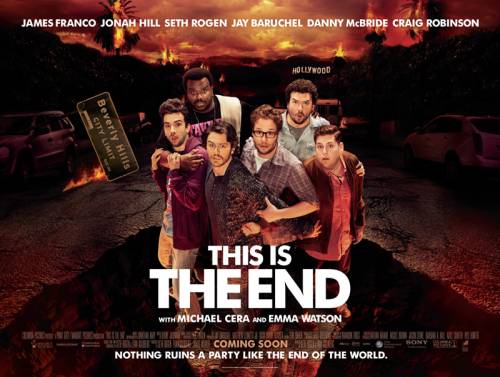 Jay Baruchel, nominally the main character, arrives in LA to meet up with old buddy Seth Rogan hoping for a chilled out weekend away from the business. Instead he is whisked off to James Franco’s impressive modern house for a celeb party where some familiar faces are acting like idiots for the most part! On a trip out to stock up the duo find themselves in the middle of what seems to be the end of the world. In a hugely impressive sequence- all the more shocking for the way it happens out of nowhere- there are earthquakes, fires and people lifted into the sky in blue beams of light.

After most party goers have fled or been gruesomely despatched courtesy of a large hole opening up in the earth, a group comprising Baruchel, Rogan, Franco plus Jonah Hill, Craig Robinson and Danny McBride hole up in the house surrounded by fire and rampaging demons and with a relatively low supply of food. Each actor gets their shining moment though earlier cameos from both Michael Cera and Emma Watson almost steal the film; Cera in particular is hilarious as you’ve never seen him before. Rogan co-wrote the script and generously gives the others the best moments as they riff on exaggerated aspects of themselves. There are enough character types to keep matters fluid and inspire stand out turns from Hill, Robinson and Baruchel.

We can only guess at how many truths are woven into the insults and observations that are made and there is a whiff of self indulgence at times. However it could be any bunch of guys and while some of the jokes may offend, there is such a boisterous atmosphere that you’ll go along with it. The regular interjections of danger adds a level that gives the film momentum.

The script originated as a short film called Jay and Seth versus the Apocalypse and is also said to be influenced by the plethora of serious films depicting destruction and mayhem in major cities. Rogan and co-writer Evan Goldberg might have tried to include a few more references to this rather than play the scenes of peril relatively straight. There is also a missed opportunity to offer a more satirical edge to the story, especially during the early party sequence which focusses exclusively on (admittedly funny) lewd behaviour rather than any commenting on Hollywood. Some may also find the the humour too insular but its comedic value should overcome this.

There are times when it feels as if you are watching two different films edited together but overall the humour / danger balance works very well undercutting any sense that we might be watching one big in joke. By the time we get to the giant devil at the end and a possible way out for our remaining heroes you realise that This Is The End is quite an achievement and a refreshing change from the too serious and po faced blockbusters that seem to be characterising 2013.