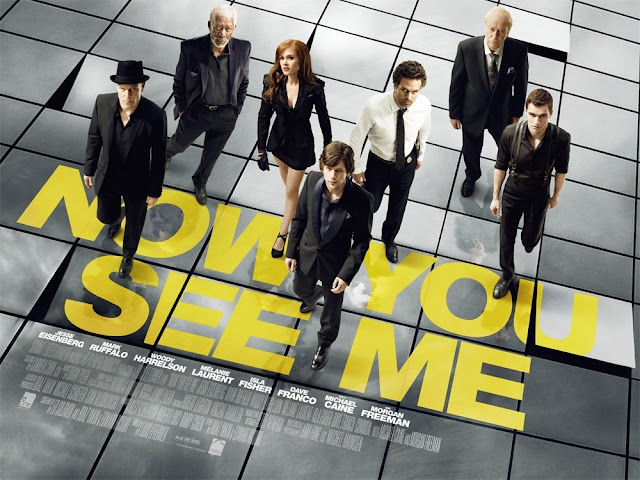 A bunch of magicians are brought together by an unknown benefactor to band together as a group called The 4 Horseman with the aim of hiding audacious criminal acts behind their mesmerising shows. Their tricks are bold and out of this world as we see them apparently initiate a bank robbery in France whilst performing from the glitz of a huge Las Vegas stage. The FBI, police and even Interpol cannot keep up despite arresting them after the show when it transpires the bank on the other side of the Atlantic really was deprived of millions. The game is afoot but the law enforcers have far less stealth when it comes to the magicians who remain elusive and in control despite their act being played out publicly.

The narrative builds subterfuge on sleight of hand on illusion to the point where it has tangled itself up in knots so tight nobody could escape convincingly from them and you start to sense that the whole enterprise is a magic trick in itself. The longer it goes on, with plot twists evolving from the un-predictable to the clearly impossible the more pressure it puts on the climax to deliver something amazingly clever. The film also relies too much too on the magicians being cleverer than anyone else and the police being completely stupid neither of which convince.

The explanations for the different tricks do generally work in themselves though some rely a little too much on contrivance. It’s when the film tries to string them all together that it unravels; in fact if it turned out that the magicians are really from another planet that would actually be more tenable than what is finally unveiled. The reveal is certainly gasp worthy but only because you just cannot see how it can be the case. It asks more questions than it answers though the ending does have the whiff of a potential sequel about it. Perhaps it’s a ploy to get us all to watch the film again with that knowledge in our head as to whom the antagonist turns out to be.  It might have just have been better not to have told us!

For all its plot incredulities Now You See Me is a wonderfully presented film, mixing action with frothy exchanges between both sides and a great cast who deliver the top notch performances you’d expect. .The stage show sequences are fluidly managed with Letterier’s sense of place and feel for the art of magic coming across as fresh amidst the increasingly homogenised current movie landscape. The director uses movie tricks to enhance the experience showing us what the magician’s audience think they see before later showing us how it is done and for a while this is enjoyable enough. The cast – which includes veterans like Michael Caine and Morgan Freeman-fly with material that is often more expositional than character based but to which they add class.


It’s best to view this movie as a big magic performance in itself and enjoy the show - just don’t expect it to make any sense by the end!