Reviewed by Chris Arnsby. “Come on don't forget that applause.” It's BBC master tape shenanigans again, as the picture rolls in on a wide shot of the Top of the Pops studio with Five Star on stage; they seem to be dressed in Blake's 7 series four jump suits. The voice of God booms through the studio speakers while the crowd whoop and applaud, “come on don't forget that applause, more more!” Who is this cruel taskmaster? It could be Floor Manager Hilary Bevan-Jones but I think you can hear Hilary just off mike carrying out the traditional Floor Manager duty of giving a ten second countdown. So, who is this voice roaring like a lion? Could it be Producer and Director Brian Whitehouse himself? Whoever it is, they whip the crowd to a frenzy, and Five Star launch into a performance of Whenever You're Ready. The show proper follows afterwards.

Peter Powell: “Hi it's Thursday night! We're happening again! It's hit after hit! It's Top of the Pops!” Simon Bates: “I'll tell you what we have got. We've got a first time which is incredible for a band of this qualidy with this number of hits Def Leppard. On the Pops for the first time with Animal here.”

[9] DEF LEPPARD: animal. Excuse the odd typography but I've decided to copy Top Of the Pops's preferred caption format this week. It looks stupid. Will I continue with it? Who knows. Meanwhile, admire Simon Bates' ability to spout words which form sentences but need two or three attempts to parse. He's like a Chatbot jammed on stream of consciousness. And yes, he did say “qualidy”. I didn't think much of Def Leppard first time round, but time has softened me. I quite like the structure of the chorus, “an I want, an I need, an I lust, animal.” 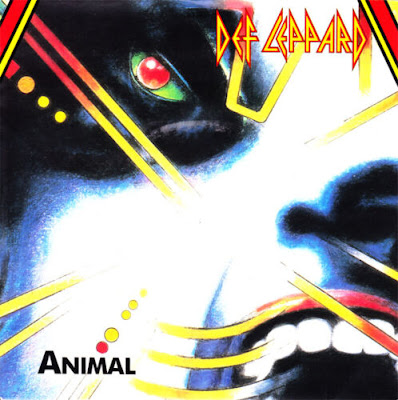 [26] MOTLEY CRUE: girls girls girls. Motley Crue on the other hand are rubbish. What's the worst bit of this video? Take your pick. I'd go for the moment when the black-haired one, who wears sunglasses, is supposed to look stunned and amazed but all he can do is open his mouth like a two year old rejecting a spoonful of food. The director was so short of usable footage he ends up using this shot twice.

[14] RICK ASTLEY: never gonna give you up. Oh my. I once really upset a girl in my school by referring to the singer as Prick Astley; surely the most obvious and lame of all satirical jabs. Is there anything left to say about this song? Rick's hairstyle is doing a lot of the heavy lifting for his pop persona. 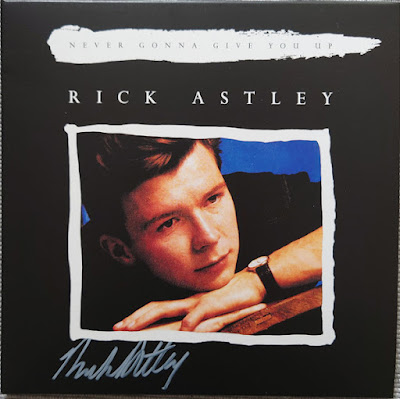 Top 40 Charts. The appearance of Wax at [34] reminded me that I used to have a C90 tape on standby so I could record any songs I liked off the radio. With this in mind, let's see if I can remember which chart songs I recorded; [38] Prince, U Got The Look; [34] Wax, Bridge to your Heart; [23] Mel and Kim, FLM; [19] Pet Shop Boys, It's a Sin. That's an eclectic selection. I don't remember recording I Heard a Rumour, but I did buy Bananarama's album Wow!

[12] WET WET WET: sweet little mystery. During the chart countdown, there's an enormous shriek of delight from the studio audience as Simon Bates announces that Luther Vandross has gone down to [21]. Does the Top of the Pops audience take pleasure in the poor chart performance of I Really Didn't Mean It, or could it be that Wet Wet Wet have taken the stage?

Marti Pellow's leaning into his jaunty chimney sweep routine this week. He skips around in a circle, he does mock walking on the spot, he does a brief chicken-walk, he waggles his shoulders, he flaps his elbows like wings. About the only thing he doesn't do is take a tea-party on the ceiling with Mary Poppins.“We'll be seeing them on Saturday in Leeds,” says Simon Bates to Peter Powell. So, Simon Bates was in Leeds on Saturday 15th August 1987; be sure to mark that one down on your tracking chart.
Top 40 Breakers: [34] WAX, bridge to your heart; [33] KIM WILDE, say you really want me; [31] SHERRICK, just call; [30] THE JESUS & MARY CHAIN, happy when it rains. 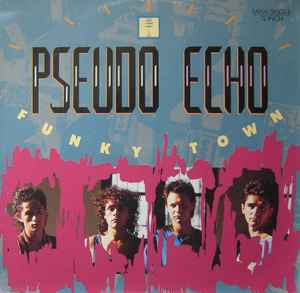 [24] PSEUDO ECHO: funky town. “I've spent a week down under looking at new Australian bands for Radio 1,” boasts Simon Bates. The question I've got is, a week when? The logical choice, given the swap in hosts between this show and 06/08/1987, is the week of 3rd August but BBC Genome gives no indication there was anything out of the ordinary about Simon Bates' programme; and the listing for Friday 7th specifically states “from Bristol University,” unless they mean Bristol University, Tasmania. Anyway, Simon Bates came to the conclusion that, “there's some great talent out there. Wait for the Australian revolution and invasion.” And while we're waiting, here's Pseudo Echo with a cover.
Top 10 Charts.

[1] MICHAEL JACKSON: i just can't stop loving you. Top of the Pops just stops. Peter Powell explains, “well unfortunately there's no video available for Michael Jackson at this minute! He's not in the country so we can't show you anything of his at the moment!”

This is odd. Top of the Pops has stepped in before when a video wasn't available. They assembled a collection of stock footage for Under Pressure, and even took the decision to make their own video for John Lennon's Woman, for the 05/02/1981 edition. (It's difficult to criticise decisions made in the raw emotional wake of Lennon's murder, but some of the editing of the Woman video is questionable). I wonder if Top of the Pops was strung along by Michael Jackson's record company and told a video was on the way. Listen to how Simon Bates describes the song during the chart rundown which was always recorded earlier in the day: “And that means we have a new Number One on Top of the Pops. At Number One for the first time. I Just Can't Stop Loving You from Michael Jackson.” I know Simon Bates can be the loosest of cannons but that doesn't sound like someone introducing a song when they know there's no video. My assumption, the programme started recording still hoping a video would be available before broadcast, and when it wasn't, they had to go with the cut from Simon Bates bombastic announcement to awkward grins from Powell and Bates.

The big question here is, how did The Roxy deal with this? Intriguingly, this website http://nostalgicmusictv.x10host.com/theroxy.htm says they showed Michael Jackson on VTR (that's video to plebs like me) on both the 4th and 18th August editions; both moments lost like tears in the rain. It's probably the song played over an assembly of clips because look at the entry for the 18/08/1987 edition. The two videos for What Have I Done to Deserve This? and Girlfriend in a Coma are listed separately from I Just Can't Stop Loving You, which is listed as VTR as if the Michael Jackson video is different from the other two.

[6] HUE AND CRY: labour of love. Janice Long and Steve Wright next week. Brian Whitehouse is still credited as Producer and Director, with no mention at all of Michael Hurll. Is Top of the Pops now Brian Whitehouse's domain?